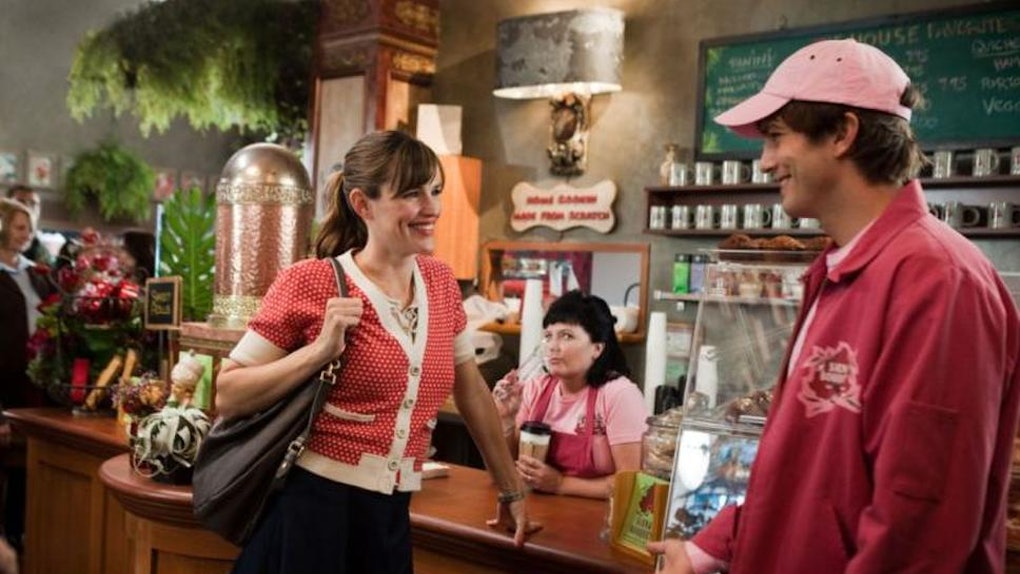 Is 'Valentine’s Day' on Netflix? 8 Movies You Should Watch With Bae This V-Day

It is a truth universally acknowledged that any Valentine's Day is 100 percent better if you celebrate the holiday by watching a romantic movie that makes you swoon alongside your bae. While the possibilities of what to watch are endless, the most ideal choice would be the 2010 film Valentine's Day. Its ensemble cast, which includes Jennifer Garner, Ashton Kutcher, Bradley Cooper, and Anne Hathaway, each have their own history of acting in romantic comedies and, with the holiday approaching, fans have to ask: Is Valentine's Day on Netflix?

If you're looking for an easy Netflix binge of the film, you're out of luck. The movie isn't currently on the streaming service, but is available for rent and purchase on Amazon Video. Understandably, shelling out at least $4 to watch the movie isn't an appealing option, and you can probably catch Valentine's Day airing on TV throughout the week of the holiday!

If you're still in the mood for a fairy-tale story, there are plenty of other movies on Netflix that are perfect to play during a cuddle session with your SO. TBH, if I was recommending what to watch by yourself on V-Day, this would just be a list of the Bridget Jones movies, but those aren't exactly universally appealing. So, if you happen to have a beloved partner with you on the holiday, here are eight of our favorite romantic flicks available to stream now on Netflix!

The next leap year isn't until 2020, but that doesn't stop this movie from being charming. If you and bae are travel junkies, you'll love Leap Year's Irish countryside setting, and Amy Adams is always a must-watch actress for me. Here, she plays a woman determined to surprise her boyfriend at his conference in Ireland and follow the Irish tradition of women proposing to men on Leap Day. However, her travel plans are delayed, and her new guide is less than enthused about working with her. Yup, here comes the hate-turns-to-love trope!

Begin Again isn't a traditional rom-com, but focuses on the love story between people and music and the importance of a physical place in your relationship with someone. Keira Knightley plays a struggling songwriter, while Mark Ruffalo is a jaded record label executive who has hit a rut in his marriage. If you and your SO live in a metro area, you'll definitely fall for the film's scenes of incorporating the sounds of the city into a song recording.

If you're dating someone who still can't watch a purely romantic movie with a straight face, the buddy comedy Wedding Crashers may be your solution. There's adult humor for your realistic sides and a sweet wedding theme for the romantic side. If you're still bummed about no Valentine's Day on Netflix, Bradley Cooper has a small role in this movie, although I can promise that he's definitely not bantering with Julia Roberts on an airplane here.

If your romance is still sweet and fresh on Valentine's Day, what better way to celebrate than by watching this movie about Barack and Michelle Obama's first date? Today they may be our inspirational couple goals, but back then, Michelle was just like any of us dealing with an intriguing guy known for his playboy past. Actors Parker Sawyer and Tika Sumpter might not be the best impersonators of the famous pair, but their chemistry makes up for it.

You probably saw this when it was in theaters last year, but the Disney nostalgia it stirs up makes it perfect for a couples' night in on the couch. The film has its lighthearted moments, such as the wonderful musical numbers that still stand apart from the original animated film, and more serious scenes, like the Beast's solo song performed among the castle turrets. Fair warning: you may want to plan a trip to Disney World after watching this.

Before Ryan Reynolds was part of a power couple alongside Blake Lively, he starred with Abigail Breslin in this romantic "dramedy" about a dad telling his daughter about his romance with her mother. Elizabeth Banks, Isla Fisher, and Rachel Weisz play the three most significant women in Reynolds' character's past in 1990s New York City. Throw in the fact that the point of the story is for Breslin's Maya to figure out which woman is her mom, and you stay totally invested in the time-jumping story. Can we start a Kickstarter campaign for Reynolds to play more rom-com dads?

You probably had that infamous Audrey Hepburn poster hanging in your college dorm room, so why not refresh your memory of the classic film? As bubbly socialite Holly Golightly, Hepburn meets her new neighbor, George Peppard's Paul, and the two quickly become involved in each other's lives. The movie is probably a little more problematic than you remember it to be, but the romantic ending still gets me every time.

Before he was McDreamy and splashed across "Sexiest Man Alive" magazine issues, Patrick Dempsey was a nerd in this 1980s high school flick. In a classic "nerd-wants-to-be-cool" story, Dempsey's character bribes a popular girl to pretend to be his girlfriend for a month. His earnestness paid off — Dempsey won a Young Artist Award for his portrayal. It may not be a John Hughes film, as all teen movies from the '80s seem to be, but Can't Buy Me Love is a perfect balance of innocence and cheesiness for a throwback Valentine's Day watch.

In the end, what you watch on Valentine's Day with your SO falls back on your personal taste, but these are great starting points!

More like this
Is Netflix Making A 'To All The Boys' Spinoff Series About Kitty? Here's The Tea
By Rachel Varina
The Netflix Reality Show You Should Watch, Based On Your Zodiac Sign
By Chelsea Jackson
'He's All That': Premiere Date, Cast, Trailer, Filming News, & More
By Dylan Kickham
Stay up to date