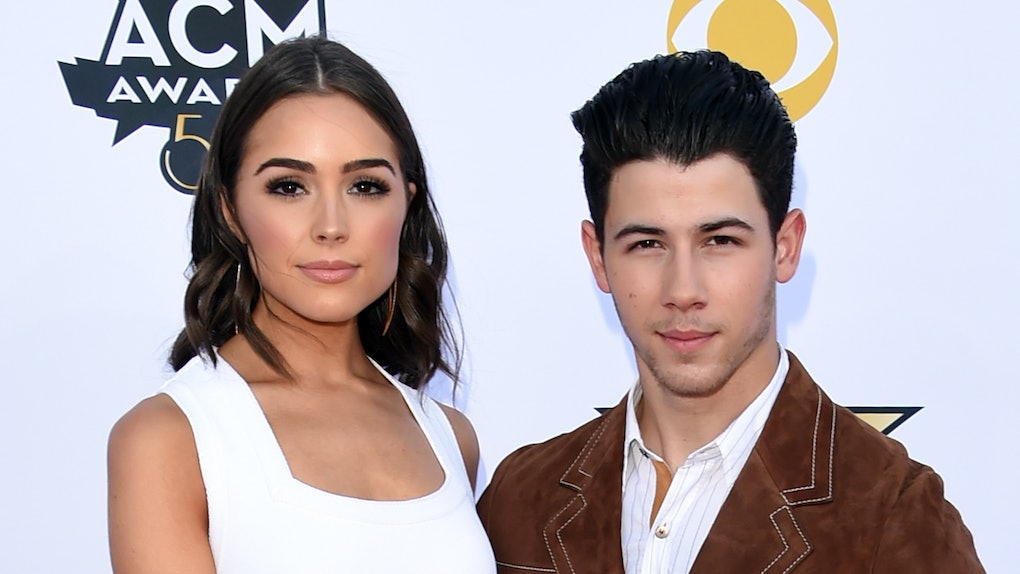 Is "Used To Be" About Olivia Culpo? Nick Jonas Teased Some Curious Lyrics From The Track

Whoa, blast from the past. Nick Jonas is so busy being married to Priyanka Chopra, it didn't even dawn on me that any of the music on the new Jonas Brothers album Happiness Begins might have been written or inspired by a different time in his life, aka, when he was dating Olivia Culpo. Jonas teased lyrics from across the whole album on his Instagram stories and it looks like the words from a song called "Used To Be" are drawing attention from curious fans. Is "Used To Be" about Olivia Culpo? I mean... maybe. I personally feel like writing a song about an ex is a strange move when you're so clearly (and so recently) in love with your new wife. But, then again, I'm not a famous musician trying to sell records or anything.

So far, Jonas has only dropped a handful of lyrics from each song but in text-form only. There was no audio to accompany his series of Instagram stories, but that makes the lyrics all the more intriguing. "Used To Be" is the fifth track on the record, and according to Jonas' post, includes these words:

Cold feet turned into cold weather / We had love, now it don't matter / You just thought you could do better

I mean, it certainly sounds like it could be about an ex.

To thicken the plot, Nick is listed as one of the primary writers on this particular song. He, Ryan Tedder, Louis Bell, and Zach Skelton collaborated to bring this track to the album, which is more ammo for folks on the Olivia Culpo breakup-bandwagon.

Culpo and Jonas were together between 2013 and 2015 and broke a few hearts when they called things off, including Culpo's. After their split, Culpo posted a moody photo of a sunset falling behind a palm tree-lined street with the caption:

Your heart just breaks, that’s all. Heartbreak is hard but you find more and more things to be grateful for every day. One of those things is all of you. Thank you all. Yes I’m going to be okay and I love u guys so so much. every day is a blessing.

Culpo also ended up having a little bit to say around the time of Jonas' engagement to Priyanka Chopra which made some fans raise their eyebrows. Her comments weren't full of shade per se, but they could be interpreted as shady.

She told People magazine, "I think that any time anybody can find love, especially in this industry, because it's difficult. You can see there's a track record of things not working out, so I'm so happy for him."

It's unclear what she meant by "track record of things not working out," but whatever. Culpo added, "I wish that everybody can find love and happiness. That does not mean that I would not wish that for him."

When Happiness Begins finally drops on June 7, I'm sure JoBros fans will do a further deep dive into this track's lyrics to uncover the meaning of it all.

We're all just standing by until then, Nick!