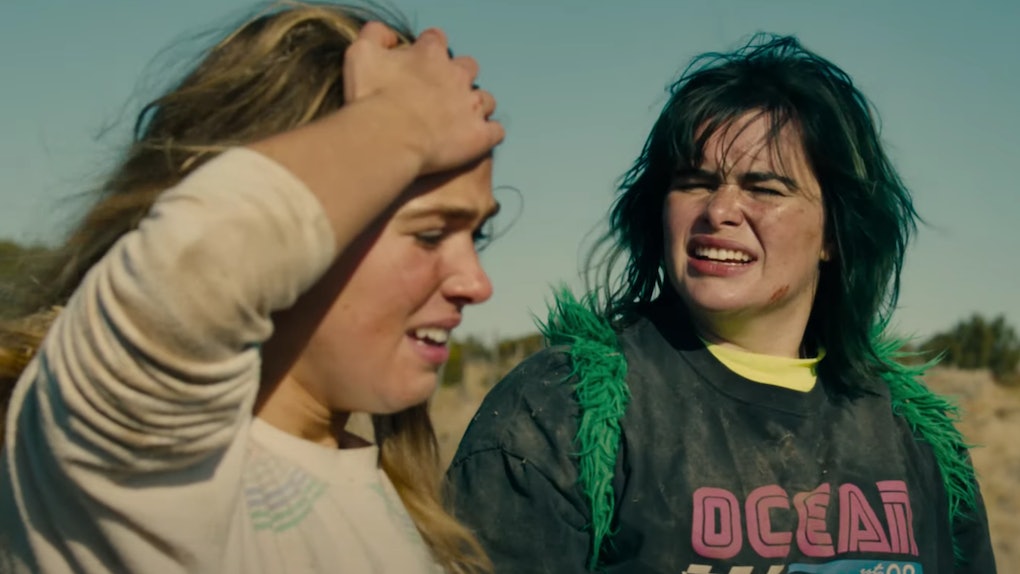 HBO Max's new buddy comedy Unpregnant brings an important story about reproductive rights to the forefront, with a ton of unexpected humor woven throughout. Since this topic has become an increasingly hot-button issue in recent years under the Trump administration, some viewers may assume the story of a young woman traveling across the country to get an abortion without needing her parents' permission could be ripped from the headlines. So, is Unpregnant based on a true story? The teen road-trip flick was inspired by actual legislation, but it's actually based on a book of the same name.

Unpregnant follows high schooler Veronica (Haley Lu Richardson), who enlists the help of her wild-child former bestie Bailey (Barbie Ferreira) to drive her from Missouri to New Mexico after she finds out she's pregnant. The reason for the lengthy trip is complicated: Veronica can't bring herself to ask her conservative, religious parents for the permission required to get an abortion in her state, and the closest clinic that doesn't require parental consent is in New Mexico. Her estranged friend Bailey is the only person she can think of who will help her without judgment, so the two set off on a road trip.

Veronica and Bailey are not based on real people, but the concept of abortion clinics with strict requirements is based on real state legislation proposals. The film is adapted from a book of the same name, written by Jenni Hendriks and Ted Caplan. When the book was published in 2019, Hendriks told Refinery29 she was inspired to write Unpregnant after hearing an NPR story about a proposed law that would require a three-day waiting period to get an abortion in South Dakota.

"The more we talked about it, the more excited we got about the challenge of tackling a topic that’s normally approached in a very serious manner," Hendriks said. "We figured, if we could pull this off, how could it not be something special?"

While Hendriks emphasized that Unpregnant was written to highlight how difficult abortion access is, especially for minors, and to show people that abortion isn't a topic that needs to be clouded in shame, she also pointed out that the story is just as much about friendship as it as about reproductive rights. "We wanted the central story to focus on something other than our main character’s decision to get an abortion ... If the story focuses solely on 'the choice,' it makes it feel like this is the only thing that’s truly important about the character. Veronica’s growth comes from her interactions with Bailey. It’s because of her that Veronica changes and becomes a better human. She is not just a person who got an abortion, she is so much more."

Unpregnant is available to stream on HBO Max as of Sept. 10.