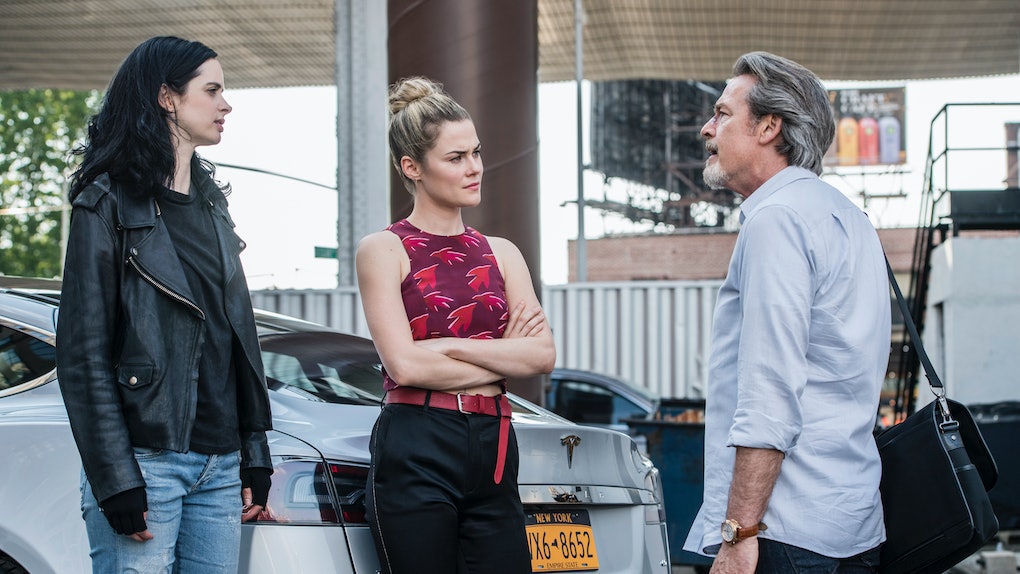 Jessica Jones Season 2 was a messy one. Highlights included Janet McTeer, who (once let off the leash) tore up her screen time with a performance worthy of her OBE, and the return of Kilgrave. Unfortunately, some storylines didn't seem to be leading anywhere rewarding, especially that of Trish. Her first few episodes were filled with a pointless boyfriend she dumps. Her middle episodes are an addiction parable, and her last episodes she seemed to go off the deep end. But it may pay off yet. Is Trish becoming Hellcat? Warning: Spoilers for Jessica Jones Season 2 follow.

Who or what is Hellcat? Let me explain. Like many of the characters other than Kilgrave, most of the characters who surround Jessica Jones in the Netflix series aren't native to her comic books. Alisa Jones, for instance, was made up from whole cloth. (Jessica mother is really dead from the car crash in the comics.) Jeri Hogarth is actually a lawyer friend of Danny Rand's dad in Iron Fist. Will Simpson and Dr. Karl are both out of the Captain America comics.

And Patsy Walker? She's actually one of Marvel's oldest female comic characters, star of her own teenage comic book series from the 1940s. In the 1950s, she stars in soap opera comics as an unmarried 20-something. When those comics fell out of favor and were canceled in the mid-1960s, her character was rescued. By the time the 1970s rolled around, she'd turned into an Avengers wannabe who used her natural gymnast ability to become a vigilante superhero, Hellcat.

From the moment Netflix's Marvel universe added the rechristened "Trish" Walker to Jessica Jones' backstory, making them adopted sisters, fans have been waiting to see the original Patsy Walker's abilities find their way to the small screen. Season 1 was a disappointment, though, as Trish mostly spent her time in Damsel In Distress mode.

Season 2 seemed slightly more promising at first. But as Trish dug deeper into her addiction to Will Simpson's combat enhancer inhaler, it seemed the show was less interested in making Trish into her own superhero. They wanted her to be her own "Don't Do Drugs" PSA.

Then she kidnapped Dr. Karl, and it all began to fall into place. Whatever happened to Trish in his lab would in some way result in her gaining those athletic abilities that make her Hellcat. It was just a matter of if it would be this season or next season.

At first, it seemed like maybe that was too much to ask. Whatever Dr. Karl was trying to do, it got interrupted early and seemed more to be killing Trish than infusing her with any sort of superpower. But at the end of Episode 12, when Trish lapsed into a coma, where she was "fine, but just not waking up," it looked like Dr. Karl managed to infuse her with enough of something that changes were happening inside.

But did he really? Fans point to the final scene with the elevator, as Trish's reflexes suddenly seem to be markedly improved, to the point that she catches her iPhone on the toe of her shoe, balancing it there and not letting it smash down the elevator shaft. But as showrunner Melissa Rosenberg suggests to Bustle, it might just be in Trish's mind.

It's again about hope and leaving her in a hopeful place after a really intense season. Is this a real thing or is it not? It's just that moment of hope.

Maybe it is a moment of hope for Trish, something that will inspire her to go out and become Hellcat, even if her "abilities" haven't been enhanced a single jot. We'll have to see when Jessica Jones Season 3 rolls in.