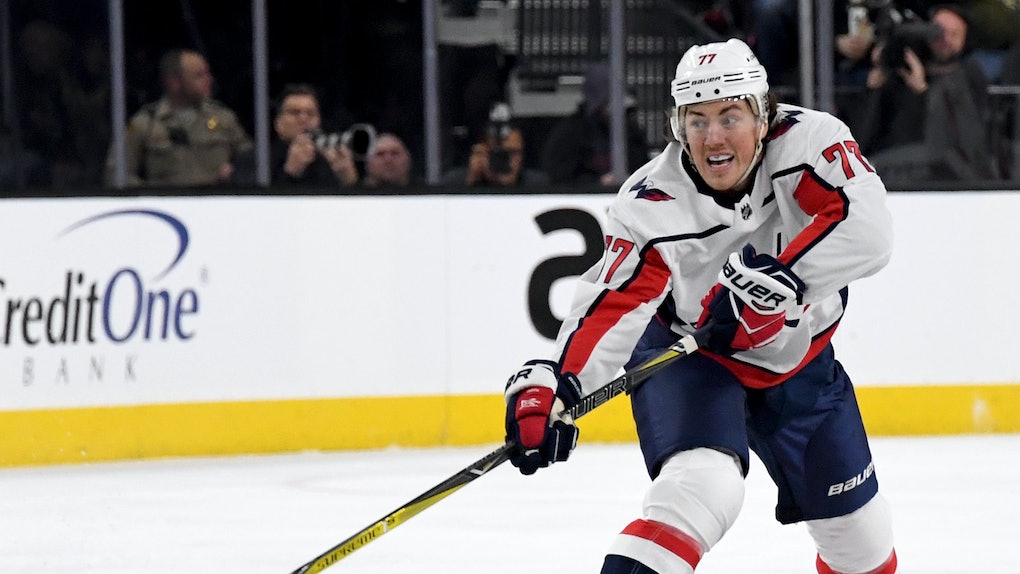 Is T.J. Oshie Competing At The 2018 Olympics? The Answer Is Pretty Heartbreaking

In the world of sports, there are the big four: football, basketball, baseball and hockey. Of those four, only basketball and hockey are considered Olympic sports. (Baseball used to be, but it was voted out starting in 2016.) Basketball is part of the Summer Olympics and hockey is part of the Winter Olympics. But this year is a little different, as it seems like hockey stars from the U.S. aren't going to the Olympics when you ask. Which leads fans to wonder, is T.J. Oshie competing at the 2018 Olympics?

One of the stars of the Washington Capitals team, based in D.C., Oshie seems a natural fit for going to compete at the Olympics. He was named to the All-Rookie team his debut year, he skipped his senior year of college and signed with the St. Louis Blues, and spent seven years as a fan favorite on the team. In 2015 he moved to D.C., where he's spent the last two years doing the same. He even hit a career-high 33 goals this past season. He made the roster for the 2014 Winter Olympics in Sochi and won the games with his shootout skills.

Naturally, fans would assume that 2018 would be his second trip to the Games. So what happened? Is it some catastrophic injury?

No, Oshie's health is just fine. The reason he's not going is the same reason that almost no players from the U.S. will be going. The NHL, their league, said no.

On Monday, while the U.S. was off having a federal holiday, the NHL announced what many fans have feared was coming since last year. They will not participate in the Olympics, and they will not field their members to Team USA.

Here is the official statement:

We have previously made clear that while the overwhelming majority of our clubs are adamantly opposed to disrupting the 2017-18 NHL season for purposes of accommodating Olympic participation by some NHL players, we were open to hearing from any of the other parties who might have an interest in the issue (e.g., the IOC, the IIHF, the NHLPA, etc.) as to reasons the Board of Governors might be interested in re-evaluating their strongly held views on the subject. A number of months have now passed and no meaningful dialogue has materialized. Instead, the IOC has now expressed the position that the NHL's participation in Beijing in 2022 is conditioned on our participation in South Korea in 2018. And the NHLPA has now publicly confirmed that it has no interest or intention of engaging in any discussion that might make Olympic participation more attractive to the clubs. As a result, and in an effort to create clarity among conflicting reports and erroneous speculation, this will confirm our intention to proceed with finalizing our 2017-18 regular season schedule without any break to accommodate the Olympic Winter Games. We now consider the matter officially closed.

In plan English: NHL owners are mad because the Olympics force their season to take a break in the middle of February, a period when hockey has the TV sports field to itself. (Football is done, baseball hasn't started.) This means they lose a ton of money while all the best players are gone, and the audience is watching the games at the Olympics instead of ones here at home.

So now the NHL has to make good on their threat, and withhold their best players from the Olympics in 2018 with the knowledge they won't be allowed to compete in 2022, either.

This is completely unfair to the players. Oshie made it very clear earlier this month on where he stood on the matter. Talking to the Washington Post, he said:

Players can cross the line and put themselves forward for Team USA without the NHL's blessing. Alexander Ovechkin, who is a longtime Washington Capitals player, has said he will do exactly that, and the owner has agreed to allow it. Would Oshie be granted the same leeway? Can he get away with doing such a thing? Current opinion seems to suggest not. If so, it's a big loss for everyone.