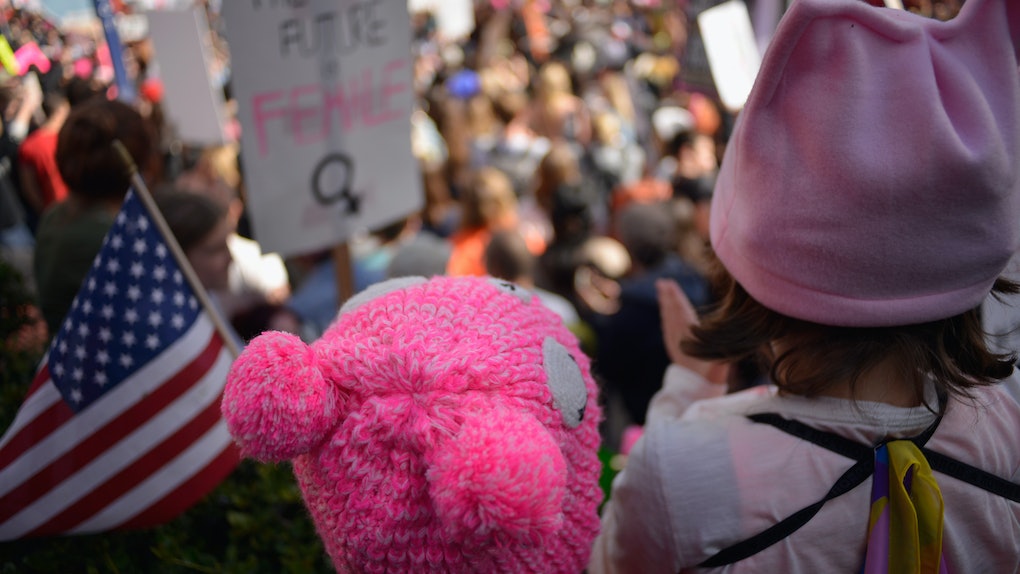 Is There A Women's March 2018? The March Is Changing This Year

The day following the inauguration of President Donald Trump in 2017 saw the largest mass protest in American history. The Women's March, which took place on Jan. 21, 2017, was estimated to have been attended by over 6 million people worldwide, in over 600 cities and on every continent. But it wasn't a one-time deal. There is a Women's March 2018, and by the looks of it, it'll be backed by strong attendance again this year.

This year's official march is titled "Power To The Polls." The general idea is converting the collective national energy into political action and results on the ballots, especially as the country looks ahead to the 2018 midterm elections in November.

"Women's March has created a powerful movement that has ignited thousands of activists and new leaders," said Women's March co-president Tamika D. Mallory in a statement on its official site. "In 2018, we must turn our work into action ahead of the midterms. This new initiative will address voter registration and voter suppression head on."

The official Women's March kickoff is taking place in Las Vegas, Nevada, on the morning of Sunday, Jan. 21. The event will launch the beginning of a 10-state national voter registration tour, aimed at getting voters ready for the 2018 elections with an emphasis on swing states.

"Nevada was rocked by the deadliest mass shooting in modern U.S. history, recent sexual assault allegations against elected officials, and has become a battleground state that will shape the Senate in 2018," read a statement on the Women's March website.

A press release from the organization added the political reason for choosing the western state: "Nevada holds a critical position in the upcoming midterm elections as a battleground state that will shape the Senate in 2018, and the perfect place to continue building our electoral power."

In October, the Women's March organizers hosted a three-day convention to keep the ball rolling. Per The New York Times, some 4,000 people (mostly women) gathered in Detroit for the inaugural Women's Convention.

Mallory adds, "We marched for justice in DC, we created our plan in Detroit and now we're bringing the power of the polls to Nevada."

Are there sister marches?

Ohhhh, yes. Sister marches are planned in cities around the country and the world — and they're hoping to break the 6 million record from last year.

Over 30,000 people indicated they'd be attending the New York City march on Facebook, while close to 7,000 indicated going to the Washington D.C. event, and almost 3,000 to the official kickoff in Las Vegas. (Of course, Facebook isn't the most accurate predictor of who's actually showing up.) It's hard to tell how the attendance will compare with last year, but with an estimated 200 marches planned, the numbers will probably add up.

Even if you're outside the U.S., you're likely within striking distance of an official sister march. Studying abroad in Florence? There's a march there. Dissertation research in Ghana? You bet. Kenya, Nigeria, Zambia, Kyrgyzstan? Yes, yes, yes, and yes.

For one thing, a lot has happened in the (almost) 365 days since the last march. The travel ban, NFL protests, Charlottesville, #MeToo, and most recently, "sh*thole countries" — there's enough there to fill volumes, and plenty of reasons that would get people fired up to protest. But apart from all the negative, one of the bright spots in the last year is how the political landscape has begun to shift towards women. As of December, a record number of women had thrown their hats in the ring to run for office in 2018. The number of female candidates for House and Senate seats are nearly quadruple and double what they were at the same time in 2015, per The New York Times.

So the Power To The Polls march couldn't be harnessing a better moment. Whether you're marching in anger over policy or personnel, in support of women candidates, neither, or both, now's not a bad time if you want to make your voice heard.