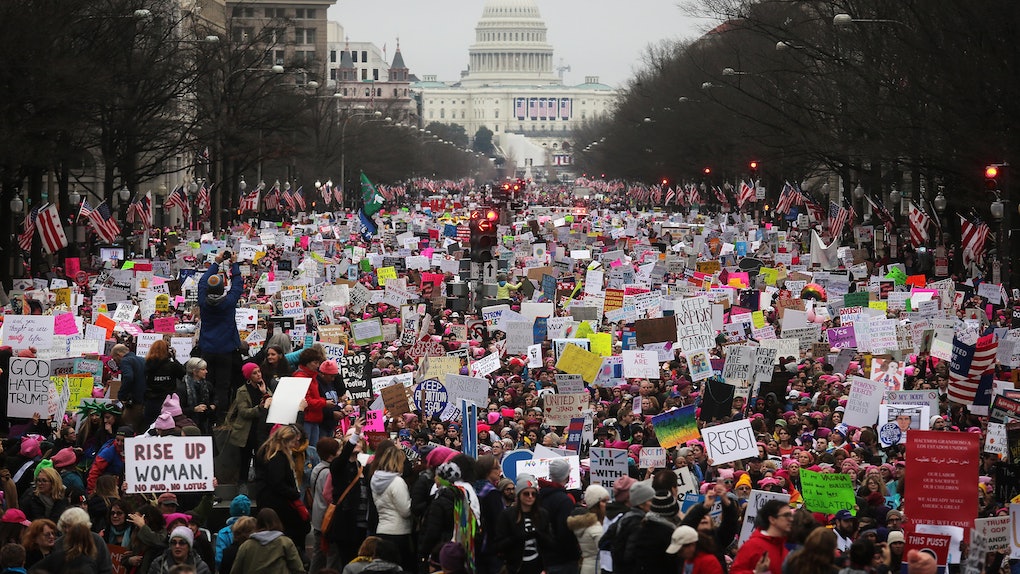 "Out with the old, in with new" seems fitting for the 2018 midterm elections. As of Dec. 7, a record rate of 369 women are running for Congress, according to Rutgers University's Center for American Women and Politics and the reasons for that seem pretty clear. There's recent buzz about Democrats possibly flipping the majority in Congress, which has been GOP-controlled since 2011. There's also a growing number of resignations and retirements on Capitol Hill that have opened up the possibility of new candidates taking their place in an open-ended gamble for state elections. New faces like Haley Stevens and Lizzie Fletcher, two first-timers running in Michigan and Texas, respectively, are taking their chances at a fresh congressional seat at the table.

A new NBC News/Wall Street Journal poll indicates that half of registered voters want a Democrat-controlled Congress, versus the 39 percent of voters who wish for it to remain predominately red. In order for a swap like this to happen, Democrats need 24 more seats in Congress. The possibility of this kind of a turnover is likely, considering 13 Republicans have announced their retirement, three Republicans have announced their resignation, and five congressmen (three Democrats and two Republicans) have resigned from office due to sexual harassment allegations. Things are up in the air, to say the least, and more than a few women are stepping in.

Lizzie Fletcher, born and raised in Houston, Texas, launched her campaign to replace Representative John Culberson, a Republican, in Texas' seventh congressional district in May 2017.

Fletcher is running to replace Culberson, who has served in Congress since 2001 and is planning to run for re-election. Fletcher is a lawyer who has aligned herself with Planned Parenthood for 15 years, dating back to the Republican National Convention of 1992 in Houston, when protesters barricaded clinics to prevent women from going inside, resulting in damages of $1 million. Fletcher helped create the Young Leaders Group for Planned Parenthood in Houston.

Like many women, her decision to transition into politics was prompted by the 2016 presidential election. Fletcher tells Elite Daily, "After the election, I looked up who my representatives were and I realized that none of these people represent me or my views, or most people I know. I feel like my own voice wasn’t being heard."

If elected, Fletcher plans to prioritize funding for infrastructure that was destroyed by Hurricane Harvey. Fletcher tells Elite Daily that Culberson has "not done much to help people who live here," and has "not payed attention his constituents."

After Senator-elect Doug Jones, a Democrat won Alabama, a historically red state, Fletcher believes the "pendulum has swung" and "the race is winnable." A climate of rampant sexual harassment claims in Congress has only solidified the Texas' candidate's campaign. "I am more convinced than ever that we need women at the table," Fletcher tells Elite Daily.

In Michigan, the same kind of momentum is met with Haley Stevens, the candidate running to replace Representative Dave Trott, a Republican, in Michigan's 11th district.

Stevens served as the chief of staff on the Auto Task Force for the U.S. Treasury Department during former President Barack Obama's presidency and has focused her agenda on the underrepresented "economic development for worker, teachers, and small manufacturing companies," something Stevens says is a "voice missing in the capital."

Stevens is running to replace Trott, who announced in September that he will not be seeking re-election. Stevens sees the potential for "new and exciting voice" looking to run in the 2018 midterm elections, and believes that, "people and voters are hungry for fresh voices and new leadership," she tells Elite Daily.

Like many other women, Fletcher's desire for a seat at the table was ignited by the election of President Donald Trump. The 2016 election prompted female leaders to recognize and pinpoint the real problem: there isn't equal representation in politics. Since November 2016, women have decided to act, as we saw with the Women's March and subsequent actions, in hopes that the next election might look a bit different.

The months leading up to the 2018 midterm elections will be crucial for the new female faces looking for a seat in Congress. As of now, women currently take up 19.6 percent of Congress, and Republicans hold the majority. However, with the growing number of female candidates stepping up to the plate, and the recent Democratic wins in historically red states, there is no telling what Congress could look like one year from now.