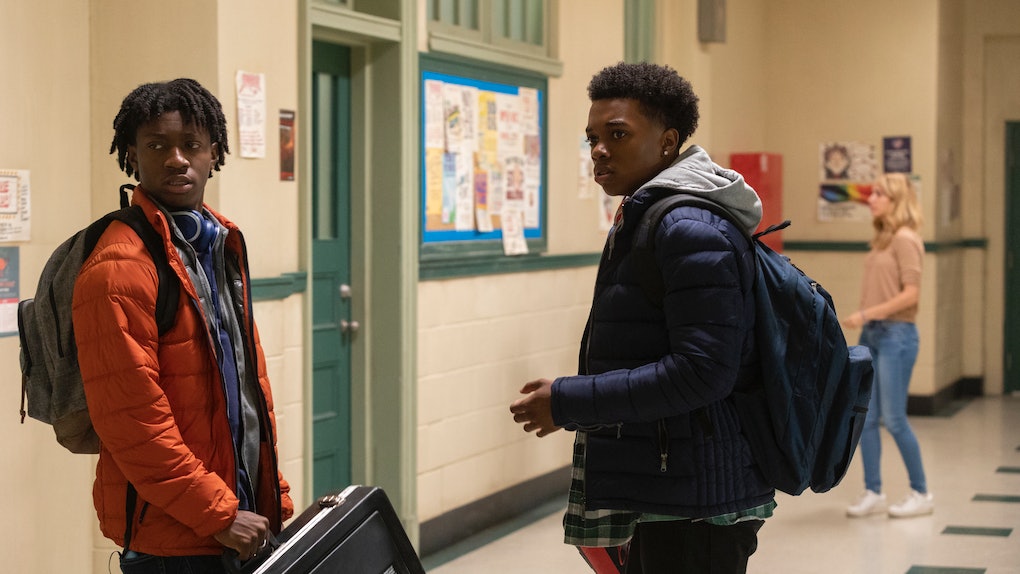 Is The High School In 'Grand Army' Real? Netflix Fans Are Curious

One of the best things about teen dramas is the mix of relatable problems with a bit of suspended disbelief, all set against the backdrop of high school life. Netflix's newest teen-centered show certainly encompasses all that, to the point where viewers may be wondering if the show is actually based on a true story — or at least if the high school in Grand Army is real. You wouldn't be so off base.

The show is actually based on playwright Katie Cappiello's stage production titled Slut. And if it feels too gritty to not be based in reality, that's because it kinda-sorta is. As she told EW in September:

It's years of listening to my students talk ... It's years of having kids call you because they don't know how they're going to afford school, and can you talk through that with them, and try to help them figure out a plan? It's when they're struggling with their parents, who can they talk to, and can I recommend a course of action?

While the five main characters of Grand Army are interesting on their own, it's the school setting that really sets the stage for their collective stories. They all attend a large, prestigious public high school in Brooklyn, New York, called Grand Army High School. The institution is renowned for teaching students who are highly gifted in art, music, theater, and sports.

But don't file for a school transfer just yet; Grand Army High isn't a real (and the bulk of the series was filmed in Canada as opposed to NYC). However, the fictional setting may be loosely based on Brooklyn Technical High School, a highly rated magnet school in the area that specializes in science, technology, and mathematics, and has an acceptance rate of about 8%. The school is not only extremely competitive and selective (just like GAHS), but it also boasts a hefty list of notable alumni including politicians, Olympians, and novelists.

So, even though you can't attend the real Grand Army High School, you could try to get accepted to BTHS, proving you have the Specialized High School Admissions Test (SHSAT) scores to get you in. But if hardcore studying isn't your style, it might just be easier to rewatch the series and remind yourself that, no matter where you go, high school life can be pretty complicated.

Grand Army is on Netflix now.