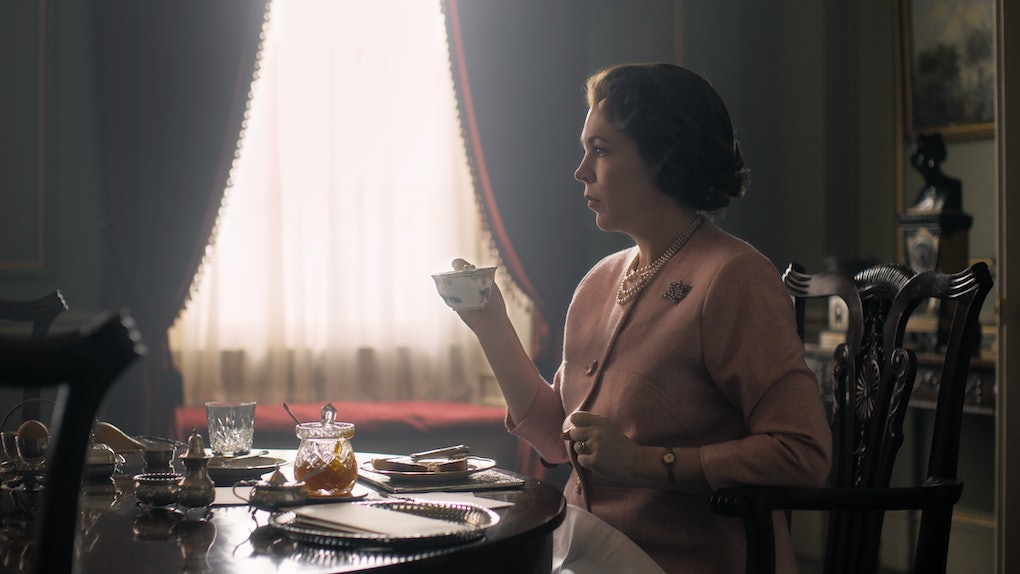 Is 'The Crown' Season 3 Historically Accurate? Let's Break It Down

After a year away from Netflix, The Crown finally returned with Season 3. The historical drama series is based on the life of Queen Elizabeth II, the current reigning monarch of the U.K. The first two seasons covered 1947 from the time of her wedding to 1964, after the birth of her last child. Now it's the late 1960s, and a new set of actors have taken over to cover QEII's middle age period. But is The Crown Season 3 historically accurate? The maddening answer is well... sort of. Warning: Spoilers for The Crown Season 3 follow.

Writer Peter Morgan is known for taking royal history and dramatizing it, from 1997's The Queen to 2013's The Audience. But there's no access to the people who lived it. So the reconstructions of events are either conjectures based on news reports, or in tabloid rumors of the era.

That doesn't mean this is all made up, a la Downton Abbey. All of the significant dates and events shown in Season 3 did happen. The show takes creative license to tell the stories of these people, what might drive them to make the choices they do, and why they are characters worth watching and sympathizing with.

1. Was There Really A Russian Spy In The Palace?

The Crown turns its attention to the Cold War this season when rumors of a Russian mole in the very high reaches of the British government start flying. The show is both accurate in the suspicions about the new PM, and the actual culprit, Anthony Blunt.

Not only that, but the show is correct that Blunt got a full pardon, to save the country the embarrassment of admitting he's been operating out of Buckingham Palace for years.

(He most likely didn't blackmail Philip into silence over the Promo Affair though, as Philip's involvement last season was made up.)

2. Did Margaret Earn A Bailout For The U.K.?

It would have been brilliant. Margaret's upper-class party girl persona and Lyndon B. Johnson's working-class bruiser politician somehow magically found kindred spirits, causing him to sign a bailout worth millions to save the U.K. economy. But sadly, none of that happened. She did go to the White House, where she made a very dull toast, and that was all.

In fact, Margaret's "triumphant tour" of America is a complete fabrication. She did go, but she behaved terribly the whole time. She pissed off half of Hollywood, the other half of NYC, made a lifelong enemy of Liz Taylor and got horrible press the whole time.

3. Did The Queen Fail To Go To The Aberfan Disaster?

On the other hand, The Crown doesn't play around with history when reenacting one of the most horrible tragedies of the 1960s in Wales, the Aberfan mining disaster. The collapse plowed into the school just as classes began, killing over a hundred children. That recording of the singing is the real deal too.

Moreover, the Queen not showing up until after the mass funeral is also correct, though whether she stayed away out of a failure to empathize or because she believed showing up would make the situation worse is arguable.

4. Is There A Royal Family Documentary?

It sounds like something the show would make up, a documentary, filmed over a year of the Queen's life. A perfect way to show how dysfunctional the family is, and set up Charles' heartbreak arc for the back half of the season.

Except it has the benefit of being real. Elizabeth did agree to let filmmakers follow the family for an entire year, and the resulting two-part series aired on the BBC and ITV in 1969, with subsequent airings in the U.S. and Australia. It hasn't been broadcast since 1972, but clips exist on YouTube.

The Crown's first two seasons relegated Lord Mountbatten into this embarrassing Philip relation. But in Season 3, the recast of Charles Dance makes him a much more complex figure, none more so than when his sister, Philip's mother, Princess Alice, turns up after living as a nun in Greece for decades.

This is all mostly true. The show doesn't emphasize it, but Philip's mother was diagnosed with schizophrenia, leading first to an asylum and later into religious life. And she did come back to live at Windsor (where she was born) after the 1967 Military junta, where she lived out the last years of her life.

More like this
'The Crown' Season 5: Netflix Release Date, Cast, Plot, & More Details
By Ani Bundel
When Will 'Riverdale' Season 5 Return In 2021? Its Mid-Season Break Is Long AF
By Rachel Varina
'All-American' Star Samantha Logan Is Putting Herself First
By Rachel Varina
Stay up to date