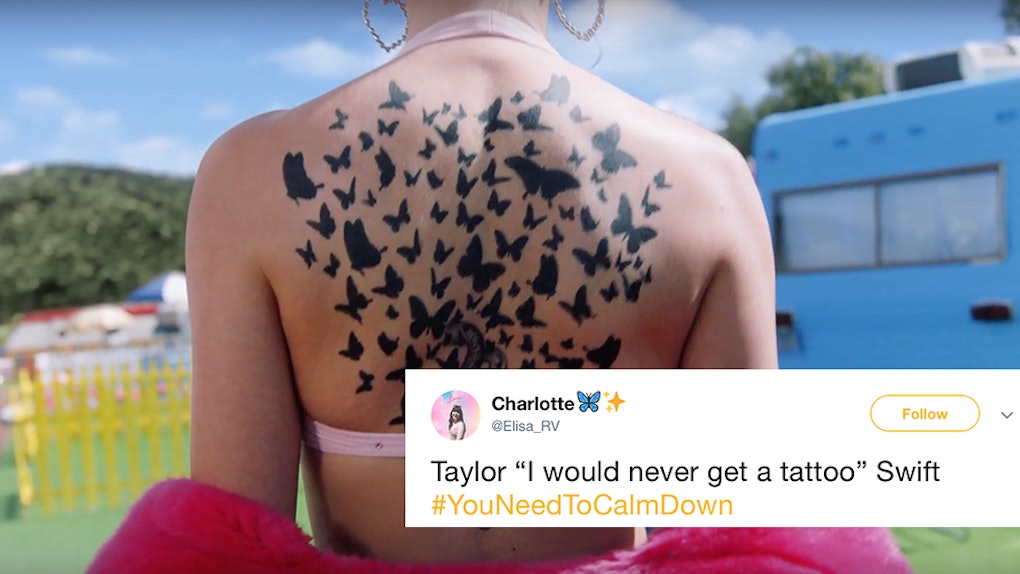 Is Taylor Swift's Butterfly Back Tattoo Real? "You Need To Calm Down" Has Raised Fans' Eyebrows

Even after her Reputation era, when I think of Taylor Swift — the singer who had pre-teen me curling my hair, buying sparkly dresses, and begging my mother for an acoustic guitar — the word "edgy" hardly comes to mind. However, no matter how sweet the phrase or image, tattoos are inherently edgy, so if I had to guess, I would say Swift is most likely not an inked-up gal. That said, her latest music video and single art has everyone asking the same question: Is Taylor Swift's butterfly back tattoo real? My pre-teen self (And everyone else in her fan base) needs an answer, stat.

If Reputation was Swift's comeback, Lover, her new album dropping August 23, is her comeback from the comeback. Reputation had a feast of angsty bangers that I most definitely sang along to at the top of my lungs, but the vibes for Lover are much more ~positive~, although Swift is definitely not done throwing shade. In her newest single, "You Need To Calm Down," she basically says "thank u, next" to judgy haters everywhere, and when I first saw the song's art, I let out a literal gasp.

ICYMI, after Kim K called Swift a snake a couple years back, Swift modeled her entire Reputation persona around the idea of being a snake so as to embrace the intended insult and reframe it as a symbol of strength and cunning. For Lover, though, Swift is channeling butterflies only, so it is possible that she could've gotten a tattoo to commemorate this new chapter.

But, one this massive? I wasn't so sure:

Neither were fans on Twitter, apparently. In fact, they were freaking out:

However, some really loved the look:

When the official music video for "You Need To Calm Down" dropped, the tattoo made an appearance yet again, before being covered by a pink faux fur jacket, natch:

First of all, I loved the video right from the start, as one of the first shots is an embroidered quote from Cher. How could I complain? From there, it explodes with a variety of prominent LGBTQ+ celebs and ends with Katy Perry and Swift embracing in hamburger and french fry costumes, respectively.

I love a Happy Meal!

Still, the music video didn't really clear up whether or not the tat was real, although there's another shot that shows Ellen DeGeneres getting a tatt, so maybe there really was a tattoo artist there on set? My money is on the idea that it's a temporary tattoo (No doubt one that will be available as merch soon!), but who can say for sure? Believe me, I've been stalking the Instagram accounts of every celeb tattoo artist in Los Angeles, and no one has claimed the piece, so although nothing's confirmed, I'm 100% sticking to my original belief that Swift is simply not an inked-up gal. I mean, if she didn't tattoo that "13" on her hand after drawing it on for every single night of her Fearless tour, then there's no way she'd get a huge backpiece for Lover, regardless of how excited she is for this new era. Just my two cents!

More like this
Glory Skincare Founder Alisia Ford On Taking Her Brand From Post-its To Powerhouse
By Theresa Massony
When Does Tati Beauty's Second Product Launch? Something New Is Coming
By Bella Gerard and Theresa Massony
A Kim Kardashian Skin Care Line May Be Coming Soon
By Margaret Blatz
Stay up to date