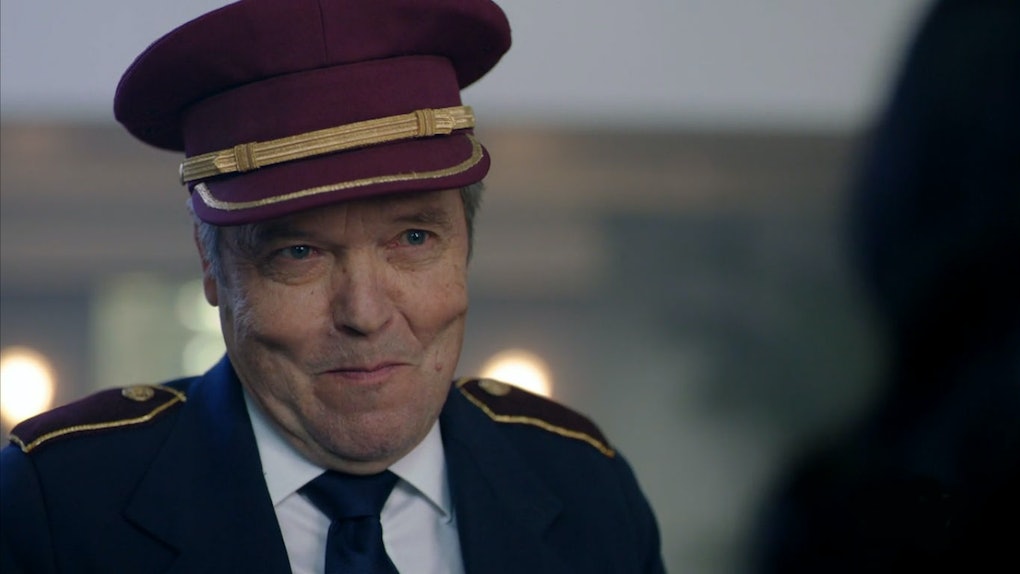 Is Smithers The Man In The Black Hood On 'Riverdale'? New Theory Has Us Convinced

Okay, somehow Riverdale just became Murdersville, USA this season, and every Riverdale fan is asking the same question: Who is the new serial killer lurking around town? Well, one theory to pop up after the second episode of the new season points to a very unexpected suspect. Could Veronica's sweet, old butler Smithers actually be the Black Hood killer on Riverdale? It may sound ridiculous at first given how kind he seems with Veronica, but there are some clues that could point to Smithers actually being behind all the killings this season. Let's get into it.

Obviously, we don't know what the Black Hood killer looks like behind that hood, but there are a few details about his appearance we can see. Most striking is the fact that the killer has piercing green eyes, and a broad face. He also appears to have grey hair in his eyebrows, so he may be an older man. Really the only person who matches all of these physical attributes perfectly is Smithers. Of course, the killer could still be a person we haven't met yet in the show, but if he is a character we already know, then Smithers is the frontrunner on appearance alone.

Apart from just his appearance, Smithers is also suspicious because of his employment. The most prevalent theory about the person pulling all the villainous strings in Riverdale is that recently released criminal mastermind Hiram Lodge ordered the hit on Fred Andrews. We already know that Hiram has a history of hiring hitmen to take care of his dirty work from the first season, and now that he's officially back in town, all eyes are on him after the recent killings. And of course, Smithers does work for Hiram Lodge as the family's butler... could his boss have given him some lethal night shifts as well?

The only potential hole in this theory is that Smithers genuinely seems to distrust and dislike Hiram, even going out of his way to protect Veronica from her criminal father. We even see Hiram ominously reveal that he's let Smithers go off to relax, replacing him with a new butler, at the end of the latest episode. This seemed to be in response to Smithers helping Veronica avoid her father, but it could also be a cover Hiram is using to let Smithers focus solely on his new position as his hired killer. Maybe Smithers was only trying to protect Veronica from her father because he knew all too well what both he and Hiram were up to.

To further deepen Smithers' connection to the Lodge family, look at the source material. In the original Archie Comics, Smithers is presented as unquestionably loyal to the Lodge family, having actually been childhood friends with Hiram before officially becoming his butler. Of course, Riverdale has changed many of its characters from the original comic books, but Smithers' fierce loyalty to the Lodge family does seem to still be at the center of his character. This could be just one more hint that if Hiram or Hermione Lodge ordered him to do even something so terrible as go on a killing spree, he might actually oblige them.

So, we really don't have much to go off of yet when it comes to the Black Hood, but another of the few details we know about him is that he took Fred Andrews' wallet after shooting him in Pop's. And who's the person responsible for getting Fred a replacement wallet? Yep, it's Smithers. In the Season 2 premiere, we see Veronica handing a new wallet to Archie as a gift to his father, and saying that she had Smithers go out and buy it. Of course, this could be totally nothing, but it could also be another little hint the show is giving us to link Smithers to the shooting. Like I said, there's still not much to go on so I'm overanalyzing everything at this point!