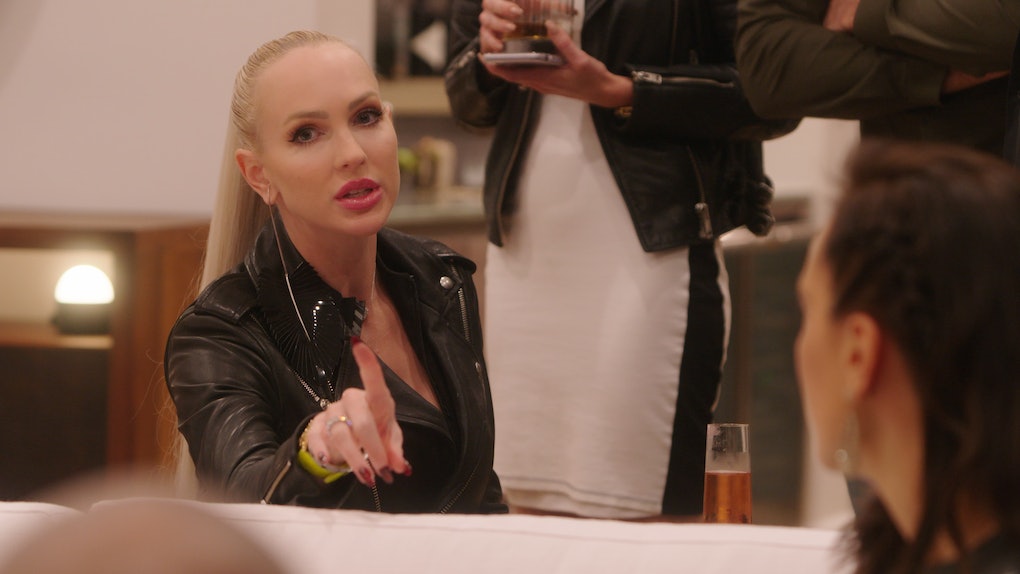 Is 'Selling Sunset' Real Or Scripted? Here Are The Facts

If you thought Selling Sunset was dramatic, it turns out the off-screen drama surrounding the show is even more so. Since Netflix released Season 3 on Aug. 7, fans have had a lot of questions surrounding the reality show, the biggest of which is how much of it is actually reality. So, is Selling Sunset real or scripted? It's time to get to the bottom of the show's biggest mystery once and for all.

Throughout the series, the Oppenheim Group real estate agents go through a lot — from marriages to divorces, ruined friendships, and rivalries. Oh, and they sold houses, too! Still, some of the scenes and scenarios were so outlandish (Botox & Burgers, anyone?), to the point even reality TV aficionado Chrissy Teigen started questioning the validity of the show. On Aug. 18, she tweeted that as a Los Angeles real estate lurker, she had some questions. "[I] have never seen any of these people lol [n]either have our agents, who I have obsessively asked," she wrote.

Basically the entire cast spoke up in regard to Teigen's tweet, citing their sales, history, and/or license info. Even the owner, president, and broker of the group, Jason Oppenheim, had a courteous yet pointed clapback to Teigen, saying that "respectfully," just because he didn't know her agent either, that doesn't mean they aren't successful. Still, this back-and-forth has only further fueled rumors that the show is much more scripted than reality.

In light of the speculation, Jason released a statement to (hopefully) stop any naysayers from, well, naysaying. The statement, obtained by Elite Daily through a publicist, reads:

Mary, Heather, Maya, and Christine were licensed and successful real estate agents at The Oppenheim Group many years prior to filming our show. Amanza worked with us as a designer, and has been a close friend of Mary’s and mine for many years. Chrishell was a practicing agent at another brokerage, many years previous to filming Selling Sunset. As a licensed agent, Davina had transacted many deals before joining the team in 2018. Any insinuation that the agents on our show are not experienced, successful, or licensed, evidences a complete disregard for the facts. Even a superficial investigation would identify previous team photos, hundreds of millions in transacted sales, and more than 50 years of combined licensed real estate experience from these agents.

If you go to the official website for the Department of Real Estate in California, you can search the group as well as the independent agents — and yup, they're all there. So why do so many people still believe the show is fake... and why does the drama seem so perfectly suited for cameras? According to cast member Davina Potratz, it's just a matter of editing (as it is with all reality shows). She spoke to Variety on Aug. 23 regarding her "mean girl" edit, and what she said lowkey rings true for the whole series:

"I think that there are just thousands of hours of footage and they have to narrow it down," she explained. "I don’t think Adam [DiVello, the series creator] is intentionally trying to give me such an edit. I think that he just made the show as entertaining and dramatic as possible."

Also in conversation with Variety, DiVello mentioned that sometimes they have to shoot a moment multiple times, meaning the cast members do have to flex their acting muscles a bit. "We typically just get everything as it happens," he said in an Aug. 20 interview. "If there’s a technical glitch and we need somebody to repeat something, certainly we’ll have them repeat it." But of course, this is standard practice in filming reality TV.

Additionally, Chrishell Stause — whose divorce from This Is Us star Justin Hartley was a big plot point in Season 3 — posted to her Instagram story earlier in the summer addressing rumors about the show being scripted: "The show isn’t scripted. If it was, I would be pissed. Who wrote that plot twist?! But seriously, they can sometimes nudge us to address things but what we say is all us," she said.

What it all comes down to is this: Yes, they're all real agents. But also yes, they all agreed to be on a reality show. So, it's fair to believe the Selling Sunset cast probably wants fame, so it's not so out-there to believe they occasionally play up their reactions to drama. Are some of the situations staged or conversations edited out of order? There's a chance. But as long as they keep serving their tea scorching, I have a feeling fans will be begging for more Selling Sunset drama — both on-screen and off.

More like this
Netflix's 'The Circle' Season 2: Release Date, Cast, Trailer, & More Info
By Ani Bundel
5 Facts About Courtney From 'The Circle' Season 2
By Dylan Kickham
Shonda Rhimes' Quote About Regé-Jean Page Leaving 'Bridgerton' Is SO Shonda
By Rachel Varina
Stay up to date