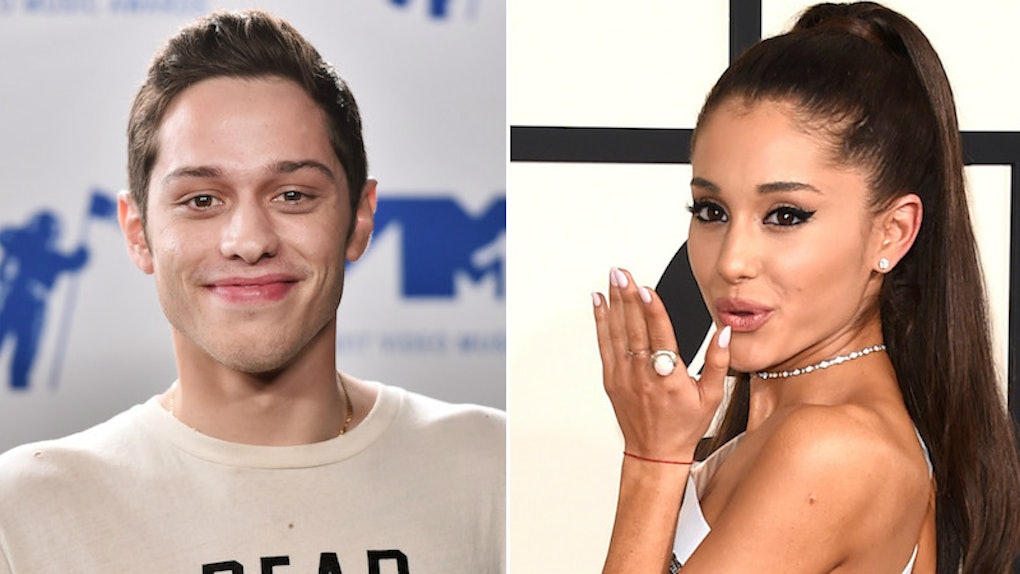 Is "R.E.M" About Pete Davidson? Probably, Even Though Beyonce Sang The Song First

Ariana Grande's new album is here! Guys! This is not a test! She just dropped her latest triumph Sweetener to adoring fans and people are freaking out. Obviously, based on her seemingly spontaneous (albeit extremely serious) relationship with Pete Davidson, people are dying to see what references she might make about her new fiancé in her tracks. One question people are wondering is, is the song "R.E.M" about Pete Davidson? All signs are pointing to yes — even though an iconic singer had a hand in creating it. Oh, that singer? It's an artist that goes by the name of Beyoncé, maybe you've heard of her?

Grande first teased the track when she created a video with Elle. Grande was playing a game called "Song Association" in which she was given a word and had to sing a song with that word in it as fast as she could. When presented with the word "dream," Grande opted to sing her own song "R.E.M" and gave us a sneak peek at the impending hit. In the video, she sang just a few lyrics, but that was all fans needed. At the time, she chose the words, "Boy, you're such a dream to me. Before you speak don't — cause I don't want to wake up... wake up... wake up..."

But a Beyhive Twitter fan account leaked a secret audio recording of "R.E.M," sung by Beyoncé herself:

When questioned about the song being recycled, Grande confirmed that it was in fact a flipped song, but that it was created into an "entirely new" track. She responded:

mmhmmm ! well kind of , it’s an entirely new song now but the hook was so dreamy it had to find a home i think it’ll be one of your favs

And now that we have the whole song and all of the lyrics, and it definitely is about Davidson — and if it's not, I'm not sure who she's singing about. Some of the lyrics go:

'Excuse me, um, I love you,' I know that's not the way to start a conversation, trouble, I watch them other girls when they come and bug you, But I felt like I knew you, so I just wanted to hug you, Plus, you don't know your way around, You can stop your playing now, All your worries, lay 'em down, shh, don't say it loud, Is this real, baby?

She even referenced hearing "wedding bells," so, considering that Pete Davidson and Ariana Grande are engaged to be married, I can't imagine she'd be singing these lyrics for anyone else other than her fiancé:

But I just want to stand and yell, I will never dare to tell, Think I heard some wedding bells, shh, keep it to yourself, Is this real? (Is this real?)

C'mon. This is absolutely Pete-centric, and anyone who disagrees simply isn't listening to the song properly. Don't @ me.

Besides, it's not like her writing a song for her future husband is out of the question for Grande. She did name a track from her album "Pete Davidson," so singing about him in another Sweetener song seems pretty likely.

Either way, "R.E.M" is a bonafide hit, so let's all bow down to the queen of pop, shall we?