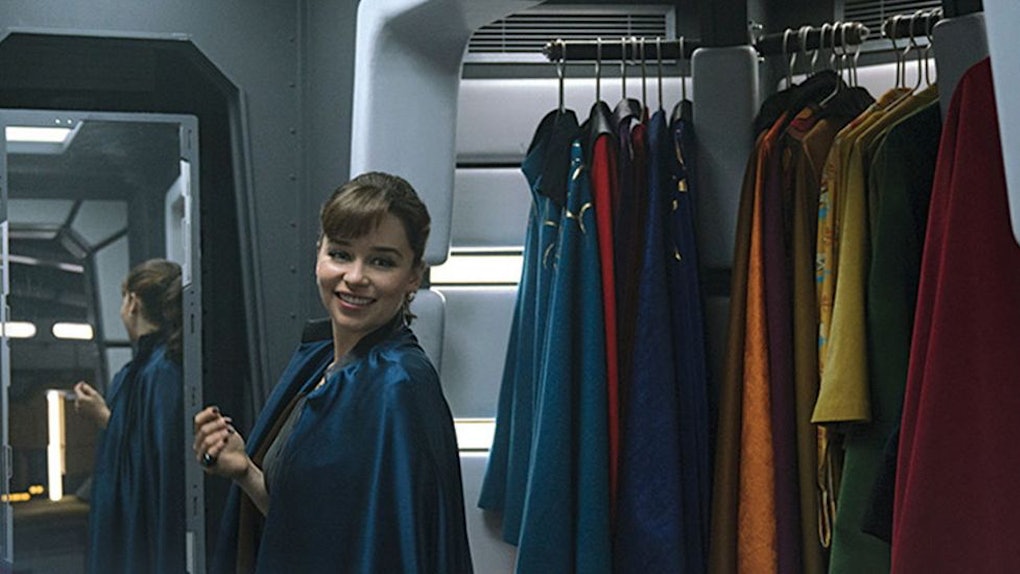 Is Qi'ra In Any Other 'Star Wars' Movies? Her Status At The End Of 'Solo' Has Fans Wondering

Solo: A Star Wars Story is a movie filled with known entities from other Star Wars films. There's Han, of course, who starred in the original trilogy and The Force Awakens. Chewie, who has been in five Star Wars films so far, and counting. Lando is in Empire Strikes Back and Return of the Jedi. But what about Qi'ra? Emilia Clarke's character was a mystery to fans going in, and now the major twist at the film is out, everyone has questions, starting with is Qi'ra in any other Star Wars movies? Could viewers have seen her on screen before without knowing it was her? Warning: Spoilers for Solo: A Star Wars Story follow.

Solo ended with a pair of twists proving though it is marketed as a stand-alone "anthology" film, like Rogue One before it, the story ties back to events of the past and events of the future. No, it doesn't butt up against the Prequels or the Original Trilogy, but the decisions Han makes today are, to quote Poe Dameron, helps create "the spark that lights the fire" of rebellion. The coaxium he gives Enfys Nest will fuel her cause, and one day it will become the rebellion Leia leads.

Meanwhile, back on the Crimson Dawn ship, Qi'ra is looking backward to the prequels. It turns out the master her boss Dryden Vos served was none other than Darth Maul, who starred in The Phantom Menace and has been a regular feature in both the Star Wars: The Clone Wars and Star Wars: Rebels TV series.

With Qi'ra now revealed to be the head of Darth Maul's gang, could she have been in other Star Wars films?

She couldn't have been in the prequels, the timeline is wrong. Qi'ra and Han are around the same age, and Han is born in 29 BBY. The Phantom Menace is set years before, when Anakin was 9 years old. Han would not have been born yet, and neither would Qi'ra. She'd have been 6 or 7 around Attack of the Clones and 9 or 10 during Revenge of the Sith, stuck on Corellia with Han, serving Lady Proxima.

But when it comes to the TV series, a Qi'ra crossover is not out of the question. She wouldn't be in The Clone Wars, those are set during the prequels when she was a child. But Star Wars: Rebels is set from the years 5- 1 BBY, when Qi'ra, assuming she survives, would be at the height of power, serving Darth Maul directly. And Star Wars: Forces of Destiny, the YouTube series, time jumps all over the place.

It's actually Force of Destiny where Qi'ra will turn up first, now her arc has been introduced to the canon. Each episode is about two-and-a-half to three minutes long, and one of the new ones for the coming Season 2 will be focused completely on Qi'ra.

Since each episode is so short, the Forces of Destiny premiere works a lot like Netflix. All 10 episodes arrive at once, debuting both on YouTube and the Disney Channel at the same time. The new season airs on TV on Friday, May 25, 2018, at 8:30 p.m. ET.

The timing to air directly in conjunction with Solo's arrival in theaters isn't accidental. Lucasfilm and Disney are banking on Forces of Destiny fans to hurry out to the theater in order to be caught up before sitting down to a second season binge. The further adventures of Qi'ra will most likely follow in Darth Maul's footsteps, fleshing out in the animated series. Unless that is, Lucasfilm decides to make a live action movie sequel. I hope they call it Solo 2: Hutts Landing.