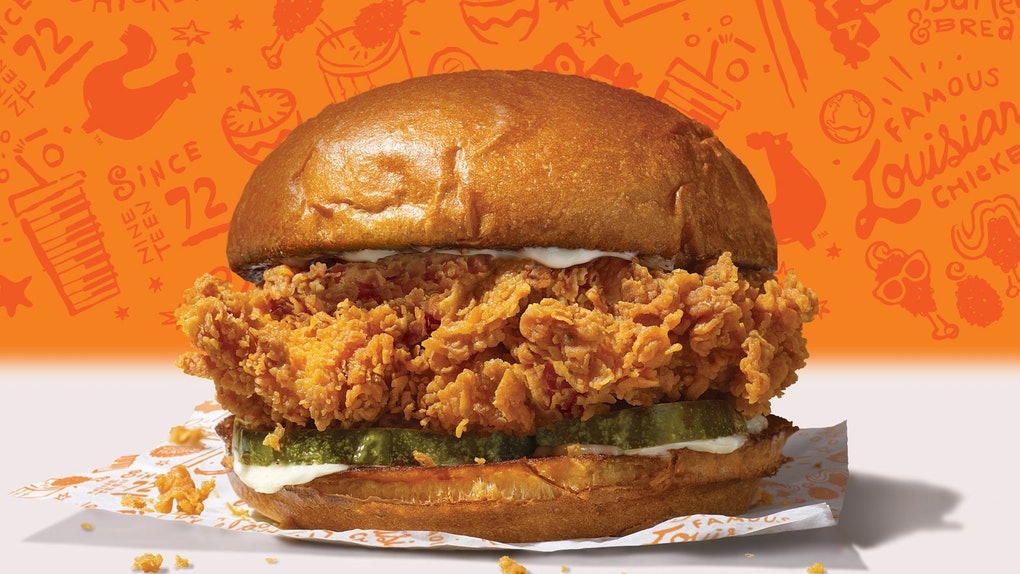 Is Popeyes' Chicken Sandwich Sold Out? There's Good News For Fans Of The New Bite

Ever since Popeyes released its new Chicken Sandwich, the buzz has been hot. Seriously, it even led to Twitter war with Chick-fil-A and Wendy's, with the brands sparring over whose chicken sammy reigns supreme. Well, it seems the newcomer is living up to the hype, because people on Twitter are complaining about Popeyes' new menu item selling out quickly in many locations. So, is Popeyes' Chicken Sandwich sold out? Well, I have some good news for fans of the new bite.

First, if you're not sure what the new menu item is that I'm talking about, let me fill you in on a little background. On Monday, Aug. 12, Popeyes launched its first Chicken Sandwich available on menus nationwide. Previously, sandwich releases were to certain stores only. Now, customers can order the "buttermilk battered and hand breaded white meat chicken filet" topped with "barrel cured pickles" and classic mayo or a spicy Cajun spread. For the real kicker, it's all sandwiched between a buttery and fluffy brioche bun.

Alright, now that you get why people are very much here for this new sandwich, you probably also understand why, as of the week of Aug. 19, stores are apparently selling out of it daily. Thankfully a Popeyes representative has good news for hungry customers. In an Aug. 21 email, the rep tells Elite Daily:

We are very happy that our guests are really enjoying our new Chicken Sandwich! Many of our restaurants have seen a high demand for the sandwich, with guests excited to give it a try. Some restaurants have temporarily sold out of the sandwich, and we are working to make sure they receive more as soon as possible.

Phew, that was a close call. Thankfully, the Chicken Sandwich is a new permanent menu item. So, even if your Popeyes location is running low on supplies during the initial release, you can look forward to it staying on the menu for the foreseeable future.

I still haven't gotten my hands on this new fan-favorite bite, but from the initial response, it seems like I'll be in for a treat once I finally do. Honestly, who would have thought something as simple as a chicken sandwich would light up the Twitterverse the way that it has? If you haven't seen the Chick-fil-A response to Popeyes' Chicken Sandwich, let me fill you in on the great chicken debate that ensued not long after.

Again, Popeyes released its new sammy on Aug. 12. Then, on Monday Aug. 19, Chick-fil-A sent out a tweet that read:

Bun + Chicken + Pickles = all the [heart emoji] for the original.

Well, Popeyes had a feeling this was a shot at them. Considering Chick-fil-A is famous for its Original Chicken Sandwich with startlingly similar ingredients to Popeyes' new bite, the fried chicken chain was probably not too far off. The Popeyes Twitter account shared Chick-fil-A's post and wrote a simple: "... y’all good?"

Even Wendy's chimed in, claiming its Crispy Chicken Sandwich is No. 1, so why would Popeyes and Chick-fil-A even compete for the "second best" sandwich?

LOL, it was a wild time, and it seemed like there were plenty of people pulling for each chain. If the sandwich selling out at Popeyes locations is any indication, though, this new Chicken Sandwich is coming hot. Thankfully, you can try it whenever you want once the stores stay stocked up, because this handheld bite is here to stay.