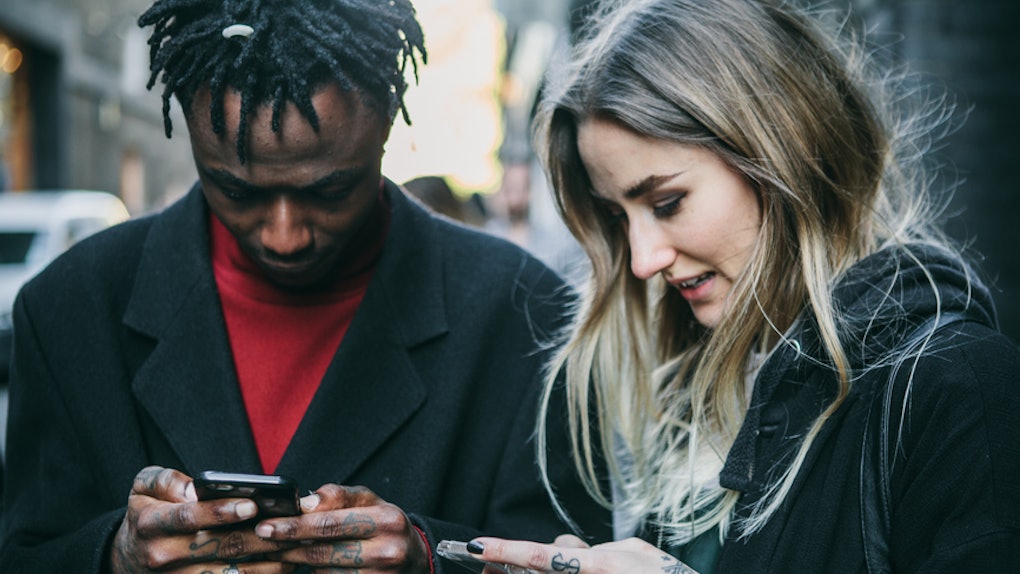 Is Phubbing Ruining Your Relationship? It Could Be Doing More Damage Than You Think

Ah, 2018. A year in which the term "trend" isn't limited only to pop culture and fashion. No, in this day and age, we even have dating trends. Dating trends like "phubbing," also known as the tendency to ignore someone you're spending time with for your phone. Get it? It's called "phubbing" because it's a hybrid term based on the words "phone" and "snubbing," duh! While I write most dating trends off as silly and harmless, a new study has found that phubbing actually presents some very real risks. In fact, the study finds phubbing can ruin your relationship potentially.

I mean, as far as dating trends go, this is a pretty relatable one, and to be quite honest, I'm not even surprised to hear that it's ruining relationships. Is there any worse feeling than trying to tell your bae a story while their eyes are glued to their phone? And even that example involves a committed relationship where it's already been established that they love you! Imagine being on a first date, where you're already nervous and trying to make conversation, only to have your date totally snub you for their phone. Imagine even being phubbed by a potential new friend at work! All in all, yeah, I think we can all agree that phubbing sucks.

But now, recent research conducted by psychologists over at the University of Kent backs up how terrible it really is. The study found that when you ignore somebody you're with (romantic or not) to focus on your phone, it threatens their "basic human need to belong." So... that explains that terrible feeling of rejection you get when you try to tell a story and everyone's too busy looking at their phones to hear what you said.

In order to conduct their research, the psychologists commissioned 153 participants to help them study different kinds of one-on-one conversations. The participants watched animations of two people conversing, and the researchers asked them to imagine that they were one of the two people.

And not all of the conversations were the same, either. There were three possible scenarios the participants could get assigned to. In one scenario, no phubbing took place at all. In another, there was just a little bit of phubbing. Finally, there was a brutal one with lots of phubbing. As you can imagine, the more phubbing happened, the less satisfied the participants were with the interaction and the relationship in general.

It turns out, phubbing isn't just a casual social faux pas. The researchers' results showed that being phubbed had a seriously negative effect on how the other person perceived the interaction.

Why does it have the ability to make human beings so upset? Well, according to researchers Varoth Chotpitayasunondh and Professor Karen Douglas, of Kent's School of Psychology, the answer to that question is not one, not two, not three, but four-fold. By that, I mean it literally threatens four of our basic human needs: self-esteem, a sense of belonging, the desire to lead a meaningful life, and a sense of control.

According to their results, the basic need that was being threatened the most was the need to belong. Which... I mean, are any of us surprised? There's no quicker way to feel like you don't belong in the conversation than when your words seem to be so incredibly boring and irrelevant that the other person would rather be scrolling through Insta than listening.

This actually isn't even the first study conducted on phubbing. In fact, a 2015 study out of Baylor University found that "pphubbing" (the kind of phubbing that takes place with your romantic partner, hence the extra "p" for partner) can cause major issues in romantic relationships.

All right, folks. There you have it. Not to sound like a Baby Boomer, but do your social life and your relationship a favor and put the damn phone away.