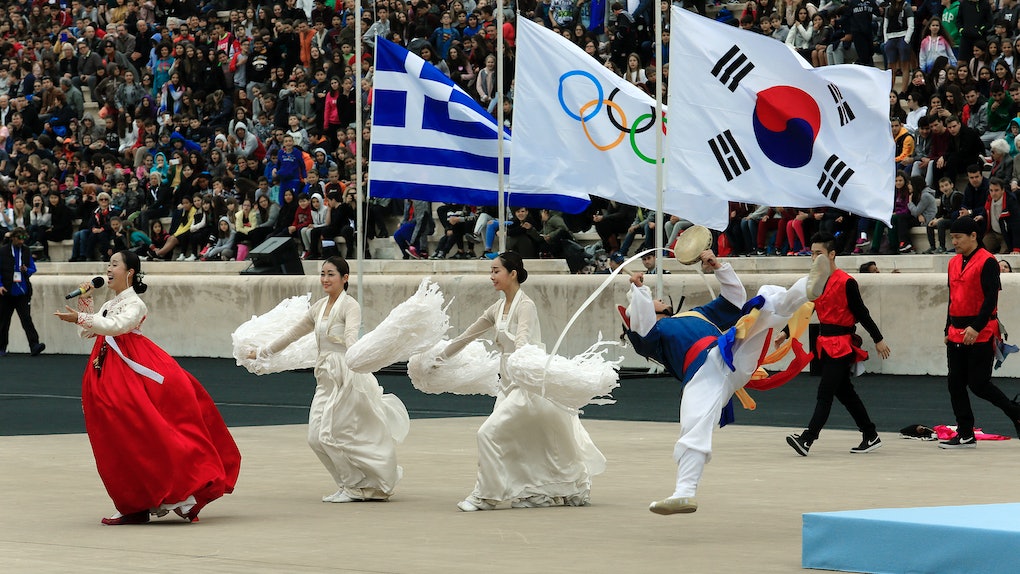 When the Winter Olympic Games kick off in February, athletes from all over the world will gather in one of the most divided areas of the world: the Korean peninsula. While South Korea will host the games, in PyeongChang, the decades-long feud between the country and its neighbor begs a question: Is North Korea competing in the PyeongChang Olympics?

UPDATE: On Tuesday, Jan. 9, North and South Korea agreed in talks for North Korea to attend the PyeongChang Olympics.

EARLIER: That question is a matter that has yet to be settled.

The BBC reports that delegates from the North and South could meet during the second week of January in Panmunjom, a village along the Demilitarized Zone, a heavily guarded border that separates the two countries. The result of the meeting could be an agreement that would see North Korea, an ideologically secluded nation that relatively shuts itself off from the outside world, send athletes to the PyeongChang games.

Such an agreement would be a gesture of goodwill between the two nations (albeit with the standards of "goodwill" between North and South Korea having been skewed by their rivalry). Though the possibility of North Korea participating is, at the time of writing, just that — a possibility — the path towards the country's inclusion at the Winter Games was further paved recently by country's leader Kim Jong-un.

During an annual New Year's address, Kim gave hope to idea of including North Korean athletes at the PyeongChang Olympics.

"I am willing to send a delegation and take necessary measures, and I believe that the authorities of the North and South can urgently meet to discuss the matter," the North Korean leader said. "We sincerely hope that the South will successfully host the Olympics."

"I appreciate and welcome the North’s positive response to our proposal that the Pyeongchang Olympics should be used as a turning point in improving South-North relations and promoting peace," Moon said on Tuesday, per The New York Times.

Since taking office in May, Moon has been pushing to have more dialogue with North Korea. The following month, the South Korean president said he'd like to see South Korean and North Korean athletes march together in PyeongChang, presumably during the parade of nations that occurs during the opening and closing ceremony of each Olympics.

"I want to see the same glory again," Moon said in the summer. "I want to feel the same Olympic sensation."

Kim Jong-un's extension of an olive branch (however significant, if at all) occurred in speech during which he also threatened South Korea's ally, the United States.

"It’s not a mere threat but a reality that I have a nuclear button on the desk in my office," Kim said during his speech. "All of the mainland United States is within the range of our nuclear strike."

President Donald Trump replied on Twitter with a message that ended sending shockwaves across the news media.

"North Korean Leader Kim Jong Un just stated that the 'Nuclear Button is on his desk at all times.' Will someone from his depleted and food starved regime please inform him that I too have a Nuclear Button, but it is a much bigger & more powerful one than his, and my Button works!" the president tweeted.

Meanwhile, the United States Ambassador to the United Nations, former South Carolina Governor Nikki Haley, has scoffed at the idea that increased dialogue between the North and South is significant.

In other words, while South Korea's leadership might appreciate the possibility of North Korea participating at the Olympics, it doesn't look like U.S. leadership thinks much of it.