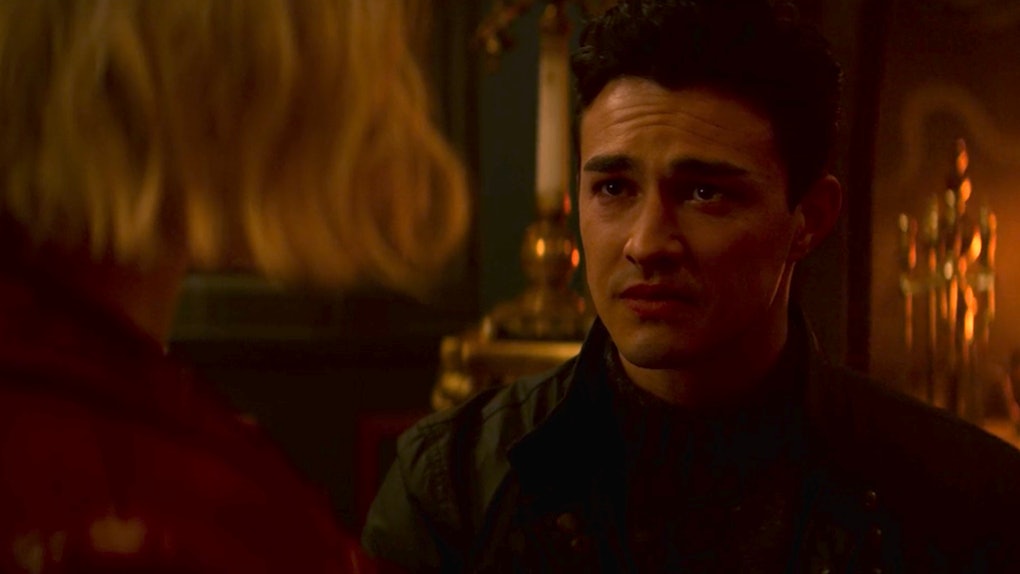 Is Nick Scratch Satan? We Need To Talk About That 'Chilling Adventures Of Sabrina' Twist

Nick Scratch has kind of been a suspicious character ever since he was first introduced in the first season of Chilling Adventures of Sabrina. The gifted warlock has proven time and again to be a valuable ally for Sabrina, and a caring boyfriend as well, but it still always seemed like he may be hiding something. Well, Part 2 of Chilling Adventures of Sabrina finally revealed Nick's dark secret, and it ended with a massive twist that has fans wondering is Nick Scratch Satan. The finale cliffhanger makes it clear that Nick will be a central figure in the next season of the show, so we really need to talk about what happened to him in the Part 2 finale.

Spoiler alert: This post contains plot details from the Chilling Adventures of Sabrina Part 2 finale. The new season of Chilling Adventures of Sabrina sees Sabrina growing much closer to Nick Scratch after she signs her name to the Book of the Beast and turns away from her mortal friends. The two quickly begin dating, and their relationship moves pretty fast. They thwart Father Blackwood's Top Boy competition together, and even agree to participate in the lovemaking festival of Lupercalia together... although they later just settle for going to Baxter High's Valentine's Day dance. As the new season progresses, it looks like Sabrina and Nick may actually end up being a perfect match. But that all changes in the season finale.

After Lucifer Morningstar returns to world, he informs Sabrina that she must open the Gates of Hell and then sit alongside him as the Queen of Hell during the Apocalypse. Of course, Sabrina refuses him, and that's when he reveals the twisted truth about Nick Scratch. He summons Nick into the room, and Nick admits that he only got close to Sabrina because the Dark Lord commanded him to. As Sabrina breaks down in tears, Nick protests that although their relationship began because of the Dark Lord, he grew to truly love her. But it's too late, and Sabrina relents that she could never trust Nick again.

Sabrina is still forced to keep Nick around, though, since she needs all the help she can get to figure out some way to defeat Lucifer and prevent the Apocalypse. The two work together to come up with a plan that will use her father's Acheron configuration to imprison Lucifer.

Unfortunately, though, Lucifer is able to break out of the trap, leaving everyone hurriedly trying to think up some new way to restrain the Dark Lord. Lilith mentions that the best prison is actually a human body, and Nick wastes no time in volunteering himself to hold Lucifer within himself. He casts a spell and is immediately possessed by Lucifer, and lunges at Sabrina growling. But Ambrose is able to knock him unconscious with a spell.

In the end, Lilith crowns herself the Queen of Hell, taking the Dark Lord's place, and she brings the possessed Nick with her to Hell where she can be sure that Lucifer where remain trapped within his body. But this is not the last we will see of Nick. The final lines of the season set up Nick as a central character in the next season: Sabrina tells her friends that she is going to travel to Hell and save her boyfriend.

Of course, the big question is how Nick's possession by the Dark Lord will affect him. Will be still be somewhat in control of his own body, or will he be fully taken over by Lucifer? Thankfully, Chilling Adventures of Sabrina has already been renewed for Season 3 (and Season 4 as well), so we will be getting our answers in time.