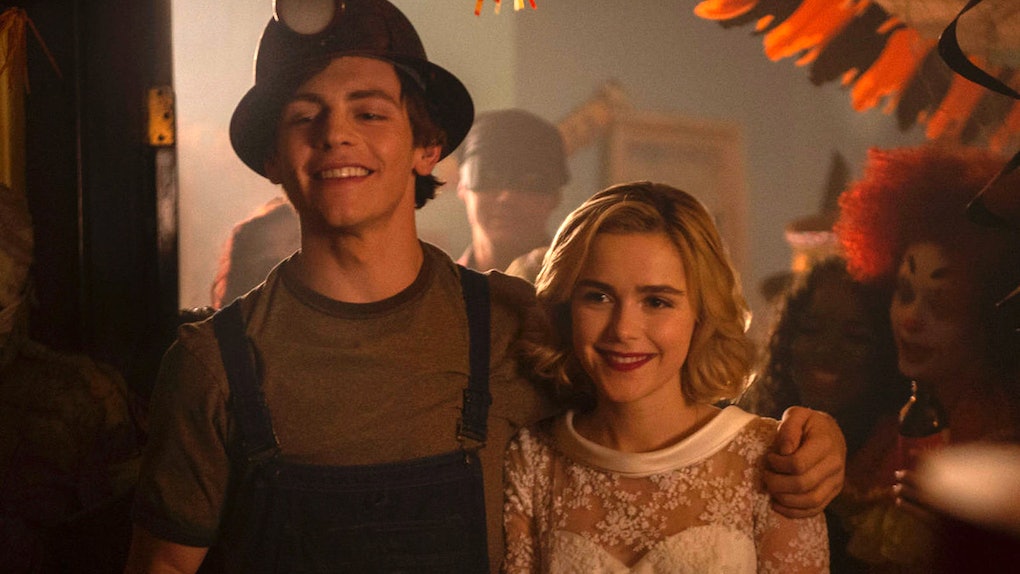 Sabrina Spellman has cast her magic on Netflix, and now the streaming service just cannot get enough of the teen witch and her dark original series. Netflix just announced that it is ordering not one, but two more seasons of Chilling Adventures of Sabrina, bringing the show up to four seasons already after only airing one. Yep — Chilling Adventures of Sabrina Seasons 3 and 4 are coming to Netflix, so fans do not have to worry about the new show ending anytime soon.

TVLine broke the news that Netflix has ordered 16 more episodes of Chilling Adventures of Sabrina, which will be split into two eight-episode seasons. That means these new seasons will be a bit shorter than Season 1 (which contained 10 episodes), but who are we to complain after the show got a huge double-season pickup. The Chilling Adventures of Sabrina team will enter production on Seasons 3 and 4 in 2019, which sounds like the upcoming installments will be filmed back to back in the same vein as Seasons 1 and 2 of the show.

Chilling Adventures of Sabrina showrunner Roberto Aguirre-Sacasa shared his excitement at the Seasons 3 and 4 pickup in a statement:

Praise Satan! I’m so grateful to my partners at Warner Brothers, Netflix, Berlanti Television and Archie Productions for supporting this darker vision of the world’s most famous teen witch. And I’m thrilled to be continuing to tell Sabrina’s chilling adventures with our incredible cast and crew, led by the unstoppable Kiernan Shipka.

Interestingly enough, this renewal means that Chilling Adventures of Sabrina is currently guaranteed more seasons than its long-running sister series Riverdale, which is currently in the middle of its third season and not yet renewed for Season 4. That should change in due time, though, given Riverdale's continued popularity, and this guaranteed future will also give the two shows more time to figure out a potential crossover. Both fans and Roberto Aguirre-Sacasa himself have spoken about the desire to bring the two shows together for a proper crossover, but so far the most that we have seen is a few mentions of Riverdale and Greendale and the appearance of a minor Riverdale character in Sabrina for a couple seconds.

This renewal news also comes just a few days after Chilling Adventures of Sabrina aired its holiday special, A Midwinter's Tale, which served to create a bridge between the show's recently premiered first season and fast-approaching second season.

Where we left off, Sabrina Spellman had finally succumbed to Miss Wardell's (AKA Madame Satan AKA Lilith) evil influence and signed her name to the Book of the Beast, pledging fealty to the Dark Lord. Sabrina also revealed the truth about her witch side to her friends, and although Susie and Roz are slowly coming around to the magic, Harvey made it clear that he does not want a part in his ex-girlfriend's magical life.

Before we can dive into the newly picked up third and fourth seasons of Chilling Adventures of Sabrina, Season 2 is just around the corner — the next installment will premiere on Netflix on April 5, 2019.

More like this
Joshua Bassett Almost Played Harvey In 'Chilling Adventures Of Sabrina' & I'm Shook
By Dylan Kickham
Netflix Renewed 'Bridgerton' For Seasons 3 & 4, Likely With More To Come
By Ani Bundel
Colton Underwood Is Reportedly Making A Netflix Show After Coming Out As Gay
By Dylan Kickham
Stay up to date