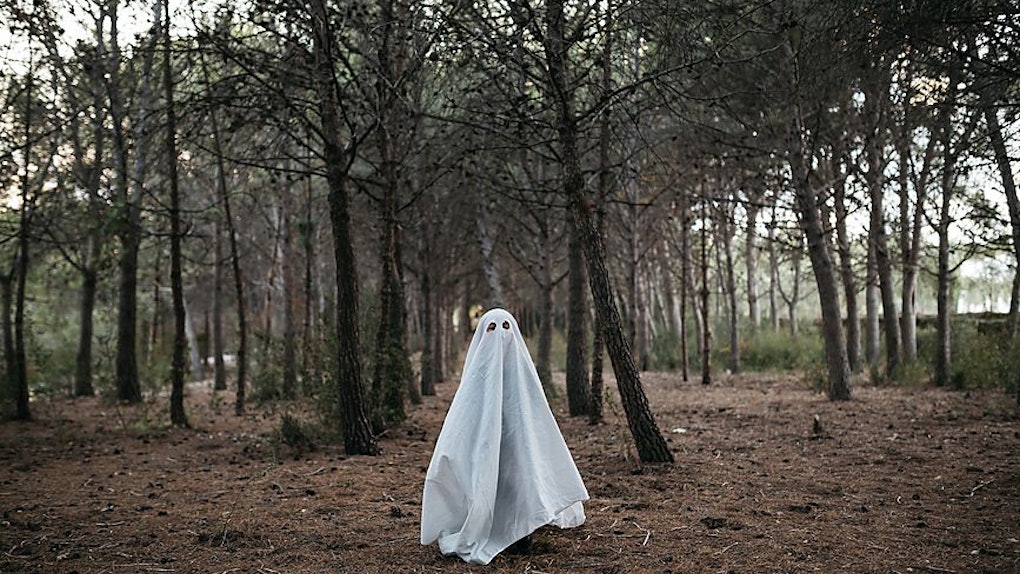 Is My House Haunted? 8 Signs You Could Be Living With A Ghostly Friend

A dish breaks. A door slams. You're always getting the chills, and you feel off when you go into certain rooms. Yes, it can all be explained away by one reason or another, but after a few repeated, rather spooky incidents, you may start asking yourself: Is my house haunted?

Trust me, I've been there. To this day, I 100 percent believe I have lived in a house that was occupied by someone or something from "the other side." And whether you like it or not, and no matter what you believe, the factual or fictional presence of ghosts and ghouls kind of goes up tenfold the closer we get to Halloween.

In fact, when I spoke to metaphysical expert Dr. Athena Perrakis of Sage Goddess a few weeks ago, she informed me that traditionally, this time of year has long been thought of as a time when spirits are more likely to be present and willing to make contact. In Gaelic tradition in particular, this time of year marks the end of the harvest season and the beginning of the "darker half of the year." Referred to as Samhain, the celebration is one in which the boundary between the physical and spiritual world is thought to become thinner.

So yes, according to these beliefs, it could be totally possible that if your house is haunted, it's particularly active right about now.

Lucky for us, Elite Daily had the chance to touch base with experts in the realm of hauntings and ghostly visits, who have been kind enough to give us a few tips about what to look out for if you think have an extra spooky roommate living with you.

1. You Hear Voices That Aren't There

Ghost hunter Adam Berry — who you can straight-up watch investigating haunted homes on his TLC TV show Kindred Spirits — tells Elite Daily that hearing voices that aren't there is a major indicator of a spiritual presence, as well as footsteps and floor creaks when no one else is home.

Is it just the wear and tear of an old house? Or is it actually a ghost? You be the judge.

2. Things Are Moving And Breaking With No Apparent Cause

Tracee Dunblazier, spiritual empath and author of the Demon Slayer's Handbook series, tells Elite Daily, "At times, there are numerous accidental occurrences, such as things falling, breaking, or strange noises" when a ghost is present.

This can be one of the primary indications that you might be living in a haunted house, especially if it's happening on a regular basis.

Adam Berry also advises not shrugging off objects that you know you put down in one place, but have since inexplicably moved to another. That's not you being forgetful — it may just be an actual ghost playing tricks on you.

3. You Or Your Roommates Just Feel Sort Of Off, For No Reason

If you and anyone else living in your home are acting outside the norm lately, Dunblazier suggests you might want to perk up your metaphysical sensors — especially if it's coinciding with the other ghostly indications we've discussed.

Julie Bradshaw, professional psychic medium and energy healer, backs this up: "Oftentimes if there is a spirit or presence in the house or on the property, it affects residents emotionally and even on some occasions, physically."

Some will start experiencing mood swings or angry outbursts. Many complain of a significant decrease in energy levels, or an increase in fear or anxiety. Some will start having health problems.

Although, do take this one with a slight grain of salt, as it probably shouldn't be an excuse for anybody's sh*tty behavior, nor should this stop you from seeing a doctor if you are having health issues, you feel me?

4. Children Won't Go In Certain Rooms In Your House

Whether you have a little nugget of your own or you're babysitting for the fam next door, according to Bradshaw, if kids won't go into or sleep in certain rooms, it might very well be because they're picking up on something in the air that isn't supposed to be there. Kids are particularly sensitive to energies and spirits, says Bradshaw.

So, yeah, if you aren't getting any little trick-or-treaters this Halloween despite your full buckets of candy, ask yourself if a spirit could be keeping them away.

5. You've Been Having Lots of Bad Dreams

Milana Perepyolkina, best-selling author of Gypsy Energy Secrets: Turning a Bad Day into a Good Day No Matter What Life Throws at You, says you can definitely pick up on the presence of ghosts in your sleep.

During sleep, your consciousness opens up to interaction with spirits occupying the house. They will let you know they are there.

They do want to contact you and let you know whether or not you are welcome in “their” house.

6. It May Not Be Your House That's Haunted, But A Belonging You Have

Yes, you read that correctly. You know that weird vase in your living room that you bought from a yard sale? It could totally be haunted.

Bradshaw says she's had to do energy clearings in her work, and she's found that the issues often subsided after removing a haunted object.

If you're feeling that a particular chair or necklace has some not-so-great juju, get that thing out of your house ASAP.

7. Your Pets React To, Seemingly, Nothing

Does your cat just keep staring every day at a chair no one is sitting in or a corner of the room that remains unoccupied?

Berry says your lovable creatures might be sensing something is there that you can't quite see.

Perepyolkina tells Elite Daily that if people come over to your house and are never keen on staying long, it might be because they can feel the presence of something they can't see, but they know makes them super uncomfortable. If this is true for you, it might not hurt to ask your buds if it feels like the house has a funky energy.

And as for how you can really tell if these things are just coincidences, mind tricks, or the real freakin' ghostly deal?

Sometimes, you can just feel it. You somehow just know. It hits you in the gut. But first, don’t assume that your house is haunted right off the bat. Take a deep breath and think logically about what just occurred or what was scary to you. For example, that knocking sound could be old pipes or the house settling (which happens when the seasons change).

After that, if you haven’t come up with a logical explanation, you still may want to shy away from assuming “my house is haunted” until it’s without a doubt, undeniably and without hesitation a supernatural event.

And as for what you can do about it? Have someone else investigate for you who isn’t emotionally attached, Berry says. And furthermore, be nice!

Just say, "Hi, I know you are here, but this is my home and you cannot bother me when I am here. Please leave me and my family alone while we are present in the space. You may live here as well but you are only welcome if you follow my rules.”

Be respectful yet stern, he advises, and the best thing to do is just talk to the entity like a real person.

I don't know about you guys, but I'm sleeping with the lights on tonight.