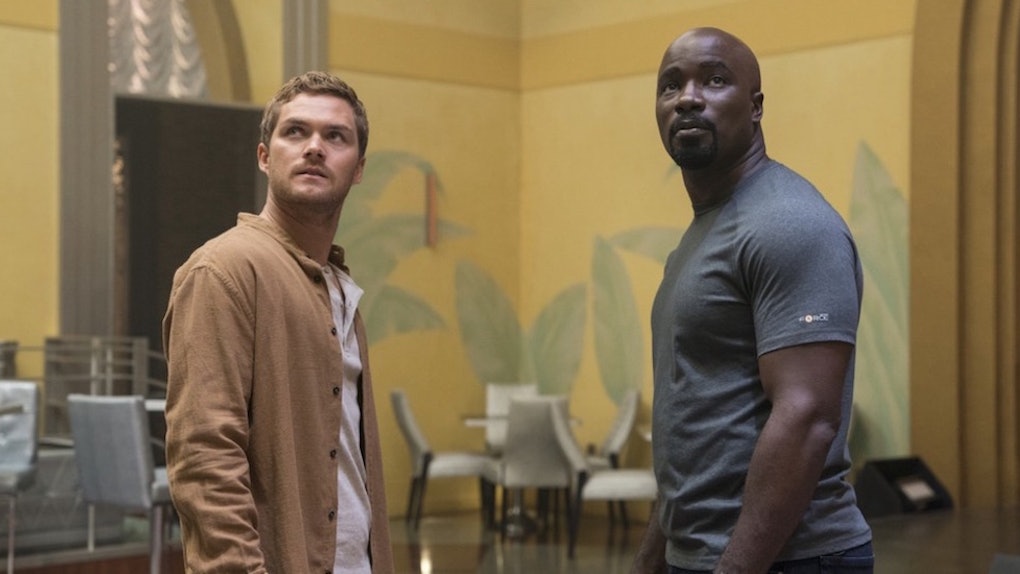 Another season of a Marvel television show always brings up the same question: Which well-known heroes might pop up at some point to help the main superhero out? It is no secret that the Marvel Cinematic Universe is probably one of the widest and most densely populated media franchises on screens right now, and the studio makes full effect of this by throwing in crossovers and team-ups at almost every turn. And with the new season of Iron Fist finally out, Marvel fans have one big crossover question: Is Luke Cage in Iron Fist Season 2? The Iron Fist and Luke Cage worlds tend to bleed into each other more than the other Defenders shows, and Season 2 of Iron Fist is no exception. Warning: Spoilers for Iron Fist Season 2 ahead.

The reason that Marvel fans are wondering about Luke Cage appearing in the new season of Iron Fist rather than Daredevil, Jessica Jones, or the Punisher is because the two share a long history as partners in the Marvel comics. The fact that Danny Rand just popped up in the latest season of Luke Cage a couple months ago also helps tie them together in the Netflix universe even more, too. In the second season of Luke Cage, Danny Rand showed up in Harlem for a couple of episodes to help teach Luke about chi in order to control his anger issues.

It definitely felt like Marvel's Netflix universe had been hinting at a Heroes for Hire team-up for a while now — Iron Fist, Luke Cage, and Jessica Jones actually form a group called Heroes for Hire at the end of The Defenders, and we recently saw Luke and Danny work together in Luke Cage Season 2 — but unfortunately, Luke Cage is nowhere to be found in Iron Fist Season 2. Cue the sobs.

Luke Cage's absence is most likely due to how the latest season of Luke Cage ended. At the end of the second season, Luke seemingly turned to the dark side by taking over Mariah Dillard's seedy nightclub, Harlem's Paradise, claiming that it would allow him to keep a closer eye on the criminal activity in the neighborhood. With Luke even deeper in the gangs of Harlem than ever before, it is no wonder why he didn't make a trip down to Chinatown to meet up with Danny Rand.

But just because Luke Cage is not in Iron Fist Season 2 does not mean that it is completely disconnected from Luke Cage's world. Luke's right-hand woman Misty Knight, now with a fully functioning robotic arm, actually recurs on the new season and helps out Danny Rand and Colleen Wing a ton.

More like this
'The Circle' Season 2 Cast's Instagrams Show Off Their IRL Social Media Skills
By Abby Monteil
5 Facts About Courtney From 'The Circle' Season 2
By Dylan Kickham
'The Witcher' Season 2: Release Date, Cast, Trailer, & More Info
By Ani Bundel
Stay up to date