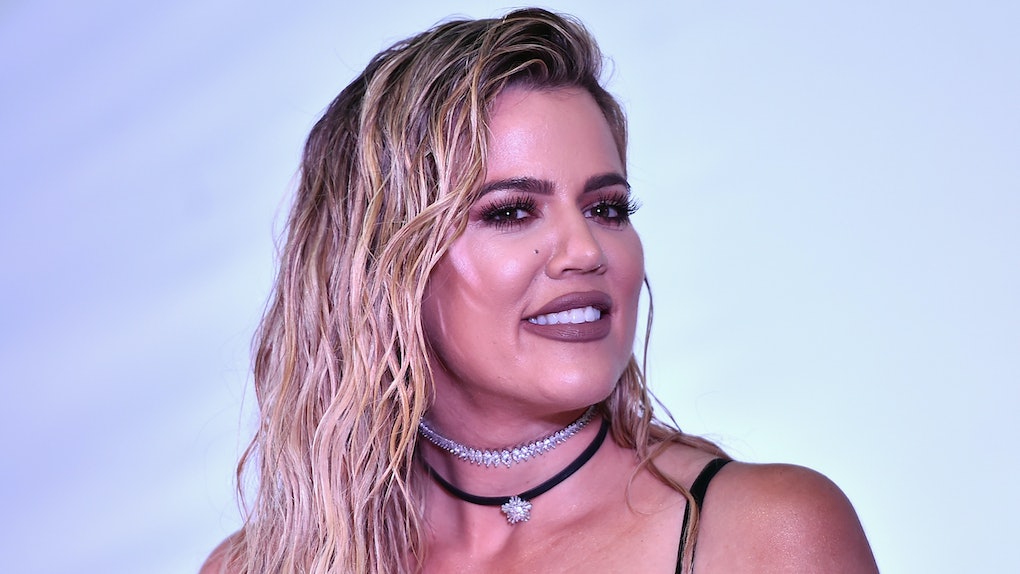 Is Khloe Kardashian Dating Again? This Reported Update Is So Exciting

There's no doubt that she's been through the ringer recently in terms of her romantic life, but is Khloé Kardashian dating again? After her relationship with Tristan Thompson reportedly ended earlier this year, Kardashian is finally ready to turn over a new leaf. While she's not necessarily ready to hop in the dating pool just yet, she's reportedly becoming more comfortable with the concept as a whole. “Khloé isn’t dating, but at least she’s able to talk and joke about dating,” a source told People. “She realizes with True around now, she just needs to be super picky.”

That said, dating takes a back seat for now — the source says Kardashian is primarily focused on her daughter.

“True will always be Khloé’s life and number one,” the source explained to People. “Khloé is obsessed with her little girl. She really is the most wonderful mom.”

Kardashian reportedly wanted True's dad to commit to her fully after he reportedly cheated on her the first time and, needless to say, that didn't happen. But Kardashian's not sweating it.

Whether or not she's ready to start dating, Kardashian is reportedly about 1,000 percent over all of the Tristan Thompson/Jordyn Woods drama that swept the nation. Any human being would let that stuff get the best of them, but Kardashian has reportedly figured out how to move on in record time.

“Khloé is great. Her heartbreak seems to have passed and her mood is much lighter,” the source told People. “Although she really wanted Tristan to come around, grow up, and be a man, she seems to have realized that she’s much better off now. Everyone is happy to see her happier.”

So, who's the next guy in Kardashian's life going to be? Well, according to a recent interview she did with Jimmy Kimmel, she admitted that she was down to keep dating basketball players. “I like what I like," she told Kimmel when asked about her type. "What can I say?”

That being said, later in the interview Kardashian admitted that dating someone with a more boring nine to five job could have possibly made her life easier. "I should've listened to my MJ [Kardashian's grandmother] and I should probably start to date, like, accountants or something like that," she told Kimmel.

For those of you who missed the drama Kardashian had to endure last month, let me give you a little refresher. Thompson reportedly cheated on her with Kylie Jenner's (now reportedly ex) best friend, Jordyn Woods. Woods appeared on Jada Pinkett Smith's show, "Red Table Talk" to deny the claims, but Kardashian wasn't buying it.

"Why are you lying @jordynwoods ?? If you’re going to try and save yourself by going public, INSTEAD OF CALLING ME PRIVATELY TO APOLOGIZE FIRST, at least be HONEST about your story," she wrote on Twitter. "BTW, You ARE the reason my family broke up!"

She eventually apologized for her outburst against Woods in a series of three tweets.

"This has been an awful week & I know everyone is sick of hearing about it all (as am I)," she wrote in the first. "I’m a rollercoaster of emotions & have said things I shouldn’t have. Honestly, Tristan cheating on me & humiliating me, wasn’t such a shock as the first time."

"What’s been harder & more painful is being hurt by someone so close to me," she continued. "Someone whom I love & treat like a little sister. But Jordyn is not to be blamed for the breakup of my family. This was Tristan’s fault."

"I have to move on with my life & count my blessings, my family, my health, & my beautiful baby True," she concluded in the third.

Luckily, it seems like she's reportedly moved on from the drama! Here's to hoping the next dude who comes around treats her as well as she deserves to be treated.