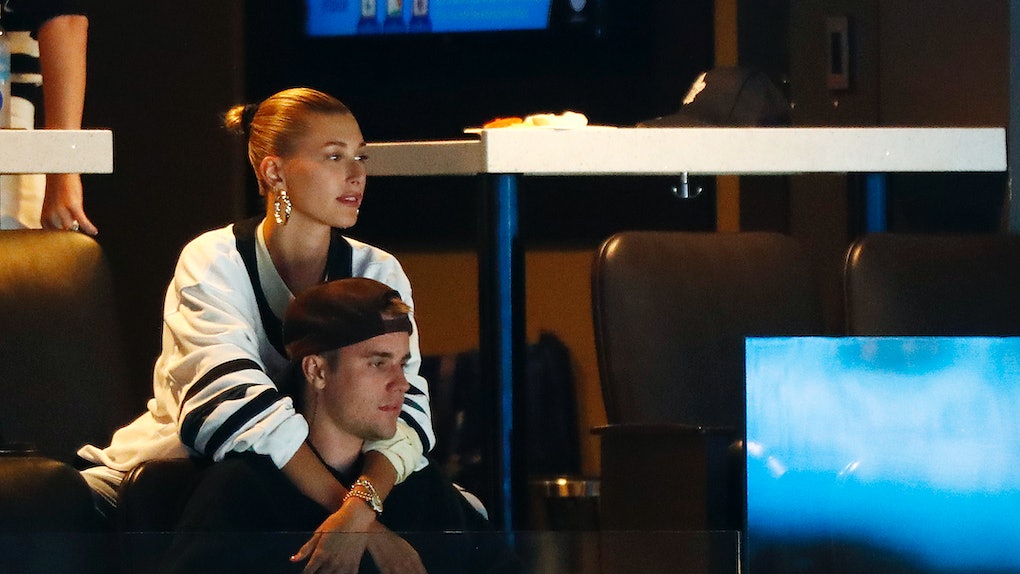 Is Justin Bieber's "10,000 Hours" About Hailey Baldwin? It's So Romantic

I love #NewMusicFridays so much, don't you? On Friday, Oct. 4, so many amazing artists released new songs, like Camila Cabello, Travis Scott, Halsey, Niall Horan, Lauv, and so many more. (Seriously. That's just five artists out of like 100 who dropped new music.) One song fans are talking about a lot is Dan + Shay's new single with Justin Bieber called "10,000 Hours" because it's so romantic. Honestly, I wasn't expecting anything different after Dan + Shay released their hit single, "Speechless," in 2018 (aka, everyone's favorite new wedding song since Ed Sheeran's "Perfect") and after Bieber dropped "I Don't Care" with Ed Sheeran back in May. Since the Biebs just got married (again), everyone's asking, "Is Justin Bieber's '10,000 Hours' about Hailey Baldwin?"

It's not a stretch to think so, and you wanna know why? According to PEOPLE, "10,000 Hours" was written by Dan Smyers, Shay Mooney, Justin Bieber, Jessie Jo Dillon, Jordan Reynolds, and Jason “Poo Bear” Boyd. Obviously, if Bieber had a hand in the lyrics, he had to draw inspiration from his own experiences, right? Considering "10,000 Hours" is a love song, it only makes sense Bieber would make the lyrics about his wife, Hailey Baldwin, who he's been married to since September 2018.

But you know what? I'll let Bieber's verse do the talking. Tell me if you think this verse sounds like it could be about Baldwin:

Do you miss the road that you grew up on?/ Did you get your middle name from your grandma?/ When you think about your forever now, do you think of me?/ When you close your eyes, tell me, what are you dreamin'?/ Everything, I wanna know it all

OK, I'm convinced these lyrics are totally about Baldwin, especially the line, "When you think about your forever now, do you think of me?" Bieber and Baldwin have said their vows twice now since they just got married again on Sept. 30, and part of everyone's wedding vows talks about spending forever with your partner, right?

The bridge also sounds like something out of wedding vows:

Ooh, want the good and the bad and everything in between/ Ooh, gotta cure my curiosity/ Ooh, yeah

These lyrics totally scream newlyweds because the line, "the good and the bad and everything in between," definitely reminds me of the phrase, "for better and for worse."

If you need any more convincing that "10,000 Hours" is about Baldwin, just check out the chorus:

The song basically talks about spending the rest of your life with someone, and since Baldwin and Bieber just tied the knot for the second time, "10,000 Hours" totally reads like a love letter from Bieber to his wife, which I think is the sweetest thing ever.

Man, I love this couple so much. Here's to many more years of #TheBiebers!