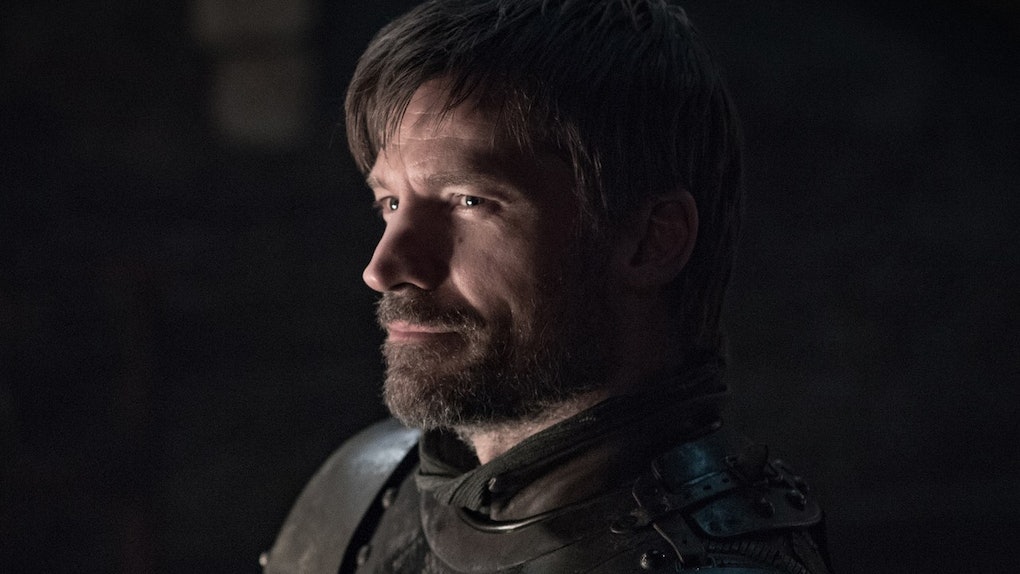 Goodbyes are never easy, especially when you're saying goodbye to characters you've known and loved for nearly a decade. The final season of Game of Thrones has been filled with quite a few goodbyes as one by one, fan-favorite characters have met their maker. But, as the final episode of the entire series approaches, some fans are wondering if they really have said their final goodbyes to certain characters. In fact, some are wondering: Is Jaime Lannister still alive? Warning: Spoilers for Season 8 of Game of Thrones follow.

In Game of Thrones Season 8, Episode 5, Daenerys took a turn toward madness and unleashed dragon fire on all of King's Landing, even after Cersei's armies surrendered the capital city to her. She focused a lot of her dragon Drogon's fiery wrath on the Red Keep, where Cersei was hiding out. Once things looked especially dire, Cersei's brother and sometimes-lover rushed to her so that they could leave the world just as they entered it: Together. The Red Keep collapsed, and Jaime and Cersei died in the rubble... or, perhaps, that's only how it seems.

Tumblr user WeedsAreFlowersToo thinks that the Game of Thrones actors' reactions to Jaime's supposed death are the key to proving the character is still alive. Those reactions provide some telling evidence that Season 8, Episode 5 was not actually the last audiences would see of him. WeedsAreFlowersToo lays out the theory:

Why isn’t ANYONE acknowledging that Jaime Lannister just died??? Why is nobody in the cast thanking Nik for his performance? Why did Pilou (Euron Greyjoy) and Lena’s (Cersei Lannister) Insta post not say anything about Jaime dying? Why isn’t Nik saying anything about what he thinks of the scene? Why did he make a post saying goodbye to Lena, and not to the character he played for 8 years? Why is there no talk of Jaime’s death in The Game Revealed?

As other characters have died on the show, the social media-active Game of Thrones actors have made a point to acknowledge the characters' deaths. For example, when Emilia Clarke's co-star Iain Glenn had a character death, she posted a tribute to him on her Instagram since they shared so many scenes as Daenerys and Ser Jorah. But, Lena Headey (who plays Cersei) didn't acknowledge Jaime's death at all, even though her character spent a huge amount of time with his. It kind of makes sense that Pilou Asbæk, who plays Euron, hasn't talked about Jaime's death at all since their characters didn't interact much, but still the lack of ceremony around it is suspicious.

The most glaring omission of any mention of Jaime's death is on the Instagram account of Jaime himself. Nikolaj Coster-Waldau, who plays Jaime, made an Instagram post about his co-star Headey, but didn't say goodbye to the character he played for eight years at all. You can see the post below:

One more clue comes from James Hibberd, a writer at Entertainment Weekly who's been doing exit interviews with each actor after their last scene on the series. While he published his interview with Headey, he tweeted that he's holding off on publishing Coster-Waldau's a bit longer:

There's the possibility that Coster-Waldau's exit interview hasn't been published yet because he hasn't actually exited the show yet.

Audiences can find out if Jaime shows up one last time when the series finale of Game of Thrones airs at 9 p.m. ET, Sunday, May 19, on HBO.

More like this
This 2021 'Game Of Thrones' Season 8 Trailer Is So Confusing... & So Good
By Ani Bundel
These Fake 'Riverdale' Brand Names Are Even Better Than The Real Thing
By Rachel Varina
The 'Glee' Cast's Tribute To Naya Rivera At The 2021 GLAAD Media Awards Was So Moving
By Abby Monteil
Stay up to date