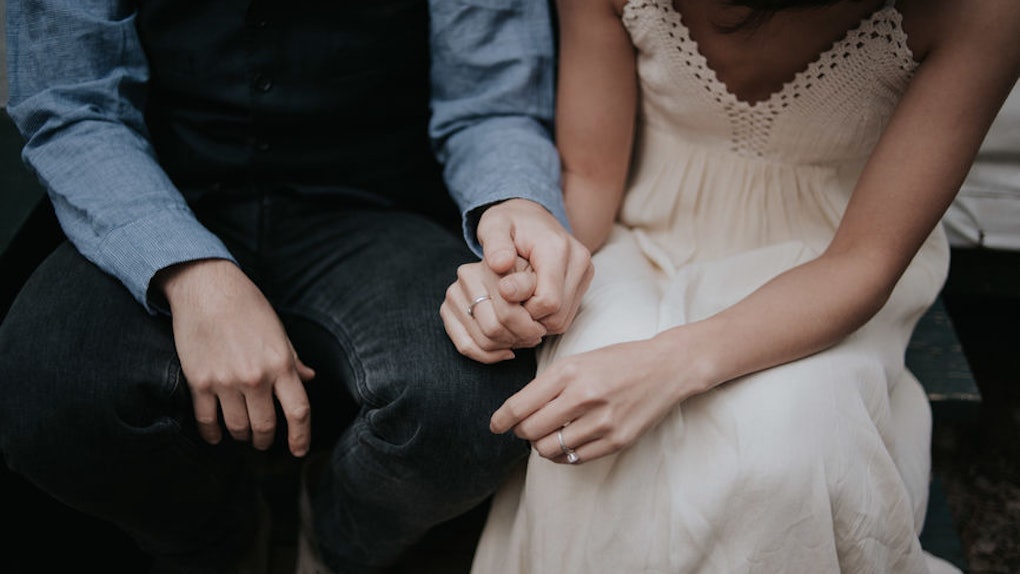 Is It Normal To Have Doubts About Marriage? 9 Women Reveal How They Questioned Their Relationships

I've always been terrified of getting married, so I accepted a long time ago that I'm probably guaranteed to have doubts on my wedding day. And then I'lll probably have doubts about the fact that I'm having doubts and... well, come to think of it, I should probably preemptively book a therapy session for that morning. But I digress. We hear about it happening all the time — but is it normal to have doubts about marriage? Does having doubts necessarily mean your marriage is doomed? Does it mean you're with the wrong person?

Well, in a recent Reddit AskWomen thread, ladies shared stories of whether or not they had doubts on their wedding days and how their marriage panned out.

She was worried this wasn't really "it."

God yes. My partner and I broke up for about 6 months before eventually getting back together. I had doubts because I couldn’t get one phrase out of my mind : “is this really it?” I loved him dearly and he was my best friend but I wasn’t sure if this was the romance you find in a fairytale. The whole “one true love” thing. I ended up dating someone else for a few weeks while we were broken up and god did I crawl back quickly. He’s perfect the way he is and I am never ever letting him go again.

She was more nervous about being the center of attention.

Not at all. I was nervous on the day but not because of who I was marrying. It was more about not wanting to be the centre of attention (as I don't like to be), but I knew that he was the person I wanted waiting for me at the end of the aisle.

My SIL, on the other hand, was having doubts before she got married a few years ago. All her friends told her to ignore the feeling as it was just nerves and was normal to get cold feet. She got married and they didn't even last a year.

I'm not saying that if you're nervous/having doubts, it's definitely a no-go..but definitely be open and explore those feelings instead of shoving them deep down, dismissing them as "everybody gets cold feet", or thinking you don't have any more options and have no out so you have to go through with it. It's never too late until you're at a point where you can't even get an annulment.

She was more nervous about the concept of marriage.

In general, but not him specifically. I have a pretty non-romantic view of marriage, and to me, it is, foremost, a business partnership. And every contract I've entered into- employment, school, a loan- I've briefly doubted my choice. Marriage is no small thing, and while it's reversible, there is a tiny teeny part of me that IS romantic, that wants a lifelong commitment and partnership, so ending it would be really tough and depressing.

She had no doubts.

I had no doubts at all, but we'd been together for 7 years by then so we were fairly certain it would work out. And it has.

Her gut told her not to do it.

Yes, lots of doubts. My gut was screaming: DON’T DO IT!!! but he swore he loved me and wanted to spend the rest of his life with me. I sold my house & almost everything I owned to marry him. Once married, his behavior became emotionally abusive and controlling. After numerous threats of eviction from his home, I finally ran away 4/29/18 after 1.5 years of marriage. I’m living on my own again. If you have any doubts, RUN! before you commit.

She caught him in a lie and almost called off the wedding.

I did have doubts. About a month before the wedding I caught him in a (ridiculously unimportant) lie. I almost called it off. It turned out that he had a lot of baggage from a family suicide and would tell people what they wanted to hear so he could protect his “mistakes” which were not actual mistakes, they were his opinions. (One time I flat out asked him his favorite color, as an example, and he literally couldn’t answer) Our marriage was rocky at first, but eventually with therapy and some difficult times (external from us) he made some progress. He lies maybe once a year now, and we always calmly talk about why.

He is really a terrible liar now that I know him, and he has never lied about anything relating to other women. He is a mate for life type person (which I was not, though I am now).

It would have been easy to run and cancel the wedding, but I didn’t, and I’m glad I didn’t. The problems and our willingness to fix them made us much stronger as a couple. I love him more and more each day. Going on 16 years. :)

Her doubts revolved around herself.

I did not have doubts about my husband, but I had doubts about myself. For example, I played the game of “this is an amazing person, they can get someone better” and “I don’t deserve them, they are going to leave me for someone better”. If you are having those doubts, stop it. One, don’t make that choice for them. Second, they chose you for a reason, for all the parts of you. I did have some doubts about this being my fairy tail love(I read soooo many romance novels and cry through them all, it’s sad). But when I sat down and looked at our relationship I realized I do have a real life fairy tail.

The big cue for me that I found the one was when we had health and safety issues with our apartment. The landlord fought us and we had to do a ton of research and get a lawyer involved. This was a very stressful time for us, we both lost weight and hated being at home. However, with all the stress in our lives there was no stress on our relationship, in fact, it strengthened our relationship. I knew then that this was my life time adventure buddy.

She knew he was it for her since the first date.

No doubts. I knew by the end of our first date he was it for me and nothing in the following 13 years has changed my opinion.

She had no doubts, despite her mom's best efforts.

I didn't really have doubts. In spite of my mother basically trying to stop it from happening at first.

It's been almost 12 years, and we have 2 kids. We moved across the country in a way that allowed him to quit working and be a stay at home dad. The timing was good because he wasn't doing well in his job. He has not met the expectations that he set when we agreed we would do this. The house is not maintained, and is only relatively clean because I've taken to writing out daily lists.

We're currently communicating via email about our issues. Well, I emailed him and told him to let me know when he was ready to talk. A week later I asked him when we would talk about it and he told me the next day. The next day (yesterday) he asked if he could email me back a response. He's going to get slapped with a separation request if he continues to ignore our marriage problems.

The main takeaway here? Having doubts on your wedding day doesn't necessarily mean that your marriage is doomed. It'll be OK!