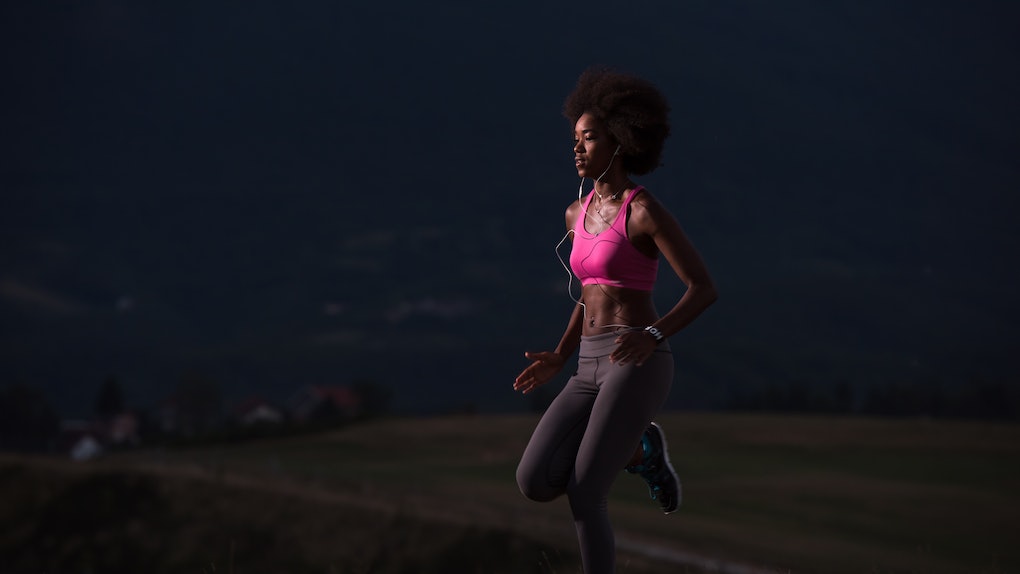 Is It Bad To Work Out Late At Night? Here's How To Make Sure It Won't Ruin Your Sleep

In college, I used to be a total morning-workout person. #RisingAndGrinding was my thing, and it was made especially easy with a schedule carefully crafted to be free of morning classes. But once post-grad life became a reality, I soon realized it's almost impossible to find time to work out. I'm not down at all to set an alarm before the sun rises, and there's no time to hit the gym in the afternoon, so is it bad to work out late at night, given the fact that that seems to be the only time that'll work for me these days?

After all, girl-boss celebrities like Jenna Dewan and Jessica Biel have admitted to working out pretty late in the evening, so it can't be that bad, right? I mean, Dewan looks like she's having a freaking blast twerking during her 10 p.m. sweat sesh, and Biel recently told SELF that she's "definitely been known to be in the gym late night, even 10 or 11 P.M." So what about a non-celeb-pleb like myself? Can I squeeze in a sweat sesh just before bed, or will it totally ruin my ability to get some sleep?

Well, according to LIVESTRONG, while some people who exercise too close to bedtime find themselves tossing and turning after the fact, it's nothing you should lose sleep over (literally and figuratively).

The truth is, the health outlet explains, the question of whether or not a late-night workout is "bad" for you depends on a couple of things. For one thing, LIVESTRONG reports, you really just have to make sure you cool down properly after you're done working out, so your body has a chance to relax and wind down before bed. Usually, the outlet says, if you give yourself enough time to cool off and "regulate your heart rate, breathing and hormone levels" after you're done exercising, you'll probably have no issues at all in dozing off once you climb into bed.

What's more, there's a decent amount of evidence out there to bust any biases against late-night gym trips. According to the 2013 Sleep in America Poll, which was carried out by the National Sleep Foundation, it doesn't really matter whether you work out in the morning or evening; as long as you're exercising at some point in the day, your sleep quality will remain the same, or it might even be improved. In this research, 1,000 people were surveyed about what time they work out, the quality of their sleep, and how long they typically sleep each night. The responses basically showed that working out in the evening doesn't automatically have a negative effect on your sleep cycle. In fact, the study participants reported that their sleep patterns were either unaffected by the late-night exercise, or that it actually improved their sleep quality overall.

Bottom line: If you're only able to fit in a workout during those late-evening hours, you're totally in the clear.

Like I said, you just have to make sure you're wrapping up your workout the right way, so your body doesn't feel totally wired by the time you crawl into bed. For starters, make sure you never neglect to stretch after your workout. Squeezing in some juicy static stretches post-sweat-sesh will help relax your muscles, and improve overall circulation to help your body prepare for sleep.

And, if you really want to make sure you're nice and sleepy after your workout, it certainly wouldn't hurt to do a short, sleep-inducing meditation to relax your body and your mind. While you're at it, you may as well ditch your phone and any other electronics, too, because they're not doing you any favors during bedtime, either.

Now, I have just one more recommendation for your late-night workout: Let loose, and don't be afraid to twerk. Seriously, Jenna Dewan makes a 10 p.m. workout look more fun than hitting the club on a Saturday night.

More like this
I Tried Singing While Running Like Miley Cyrus & OMG, My Lungs
By Rachel Varina
These 40 Clever Vaccine Selfie Instagram Captions Deserve A Shot On Your Feed
By Rachel Chapman
7 TikTok Recipes Using Ramen To Make Lasagna, Pizza, Smoothies, & More Treats
By Kelly Pau
Stay up to date