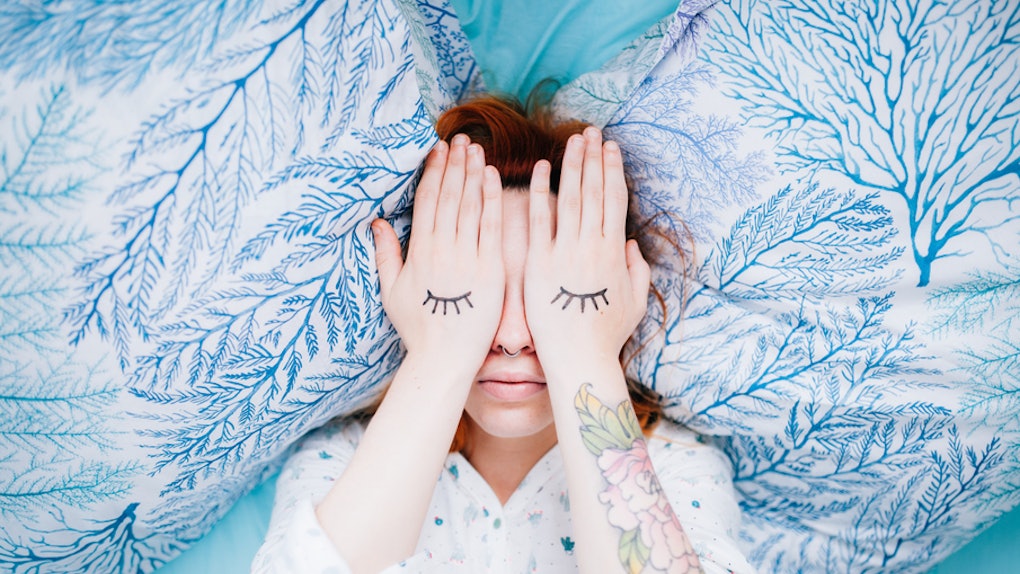 Is It Bad That I Don't Remember My Dreams? Here's Why Scientists Think It May Be A Red Flag

It's common practice for people to categorize themselves into specific types of dreamers based off of their dream history. Some people claim they dream in black and white, while others claim their dreams are as vivid as real life, and still others insist that they don't dream at all. The state and significance of the unconscious mind is an area of science that's still largely undiscovered, and the science of dreams is perhaps the foggiest area of that uncharted ocean. We know less about dreams than we do about most aspects of the human body, but new research might have an answer for you when you ask this question to your friends at brunch: is it bad that I don't remember my dreams?

As it turns out, it might be. A new study by Rubin Naiman titled Dreamless: The Silent Epidemic of REM Dream Loss argues that we are experiencing both emotional and physical blows to our health by dreaming less during our sleep. Apparently, having and remembering your dreams isn't just important for dinner party fodder when there's a lull in the conversation. Dreams are also potentially massive indicators of your overall sleep health, and, more specifically, your REM sleep health.

"Many of the health concerns attributed to sleep loss result from a silent epidemic of REM sleep deprivation," Naiman wrote in the study.

"We are at least as dream deprived as we are sleep deprived," he explained.

The largest challenge to dissecting dream health is that we don't have a universal consensus on what dreams are and how they impact us during our waking hours.

Here's what we do know for sure: Dreams happen during the state of sleep we call REM sleep, or rapid eye movement sleep, and it's during that phase that your heart rate and blood pressure levels are close to what they are during your waking hours.

Scientists start to disagree, though, when they try to pin down the actual role of dreams in your sleep.

Some argue that dreams have no use whatsoever. Others say this is an easy excuse to stop poking around something that's difficult to understand. Ernest Hartmann, a professor of psychiatry at Tufts, argued in Scientific American that dreams are the key to the unconscious mind:

Would we be satisfied with the view that thinking has no function and is simply an epiphenomenon — the kind of mental activity that occurs when the brain is in the waking state?

He's got a point. Dreams are like this massive bin of puzzle pieces that could prove to unlock endless information about the human psyche. At least, this is what Naiman thinks, and that's why he published a study arguing our dreamless sleep is something we should definitely be concerned about.

If you're not having and remembering dreams, Naiman explained, you're probably not experiencing the correct type and level of REM sleep. And if you're not experiencing proper REM sleep, you're opening yourself up to a whole host of emotional and physical health issues, including irritability, depression, weight gain, hallucinations, memory troubles, immune system breakdowns, and even a loss of spirituality, just to name a few.

Basically, if you're not remembering your dreams, it may indicate a problem way larger than not being able to contribute to your next brunch conversation.

Typically, you experience REM sleep later into the night, as your body prioritizes the deep, non-REM sleep you need to survive. But with people sleeping less and less overall, and with increased distractions waking us up in the middle of our sleep cycles, like buzzing phones and screaming alarm clocks, there's a high chance we're severely interrupting our REM cycle. This cuts off dream creation, and can potentially lead to any of those health risks listed above.

So what's the solution?

Most of the things that interrupt our sleep cycles are self-induced. In other words, you're not losing REM sleep because a massive tiger just walked into your cave. You're losing sleep because you drank too much alcohol, smoked weed, or left your phone on a loud volume setting beneath your pillow, to name a few possibilities.

It's a relatively easy solution to give yourself not just more sleep, but better sleep — so why don't we do it?

Simply put, sleeping is not the health trend that people care about. We know that we should be getting seven to nine hours of sleep a night, and we know that this would vastly improve our lives, but we still partake in Netflix binges on weeknights simply because we want to.

But now that you know why you're missing out on those Channing Tatum dreams you used to have all of the time, you might just turn your phone on silent tonight.