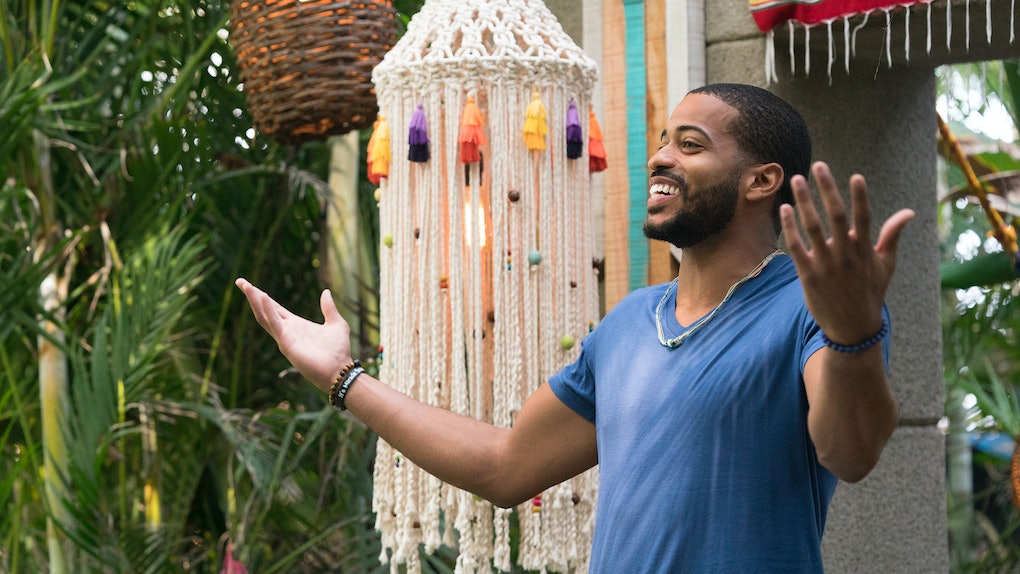 Is Eric Single After ‘Bachelor In Paradise’? He's Become A Hot Commodity

It's miracle season! According to Bachelor in Paradise contestant Eric Bigger, every season of TV/life/the universe is worth being a miracle, but his time on Season 5 of Paradise has taken a negative turn that definitely isn't miraculous. After a serious date with his solid love interest Angela Amezcua, Eric's interest in new arrival Cassandra Ferguson spiked, stirring up some drama between him and Angela that we'll see more of next week. We'll have to wait and see if Eric leaves Paradise with a girlfriend, but until then, we're wondering if Eric is single after Bachelor in Paradise.

The Baltimore native charmed Bachelor Nation last year when he transformed from being an insecure contestant to a serious contender during Rachel Lindsay's Bachelorette season. He finished in third place and skipped Paradise last year, but returned to ABC this past February in a short-lived stint on Bachelor Winter Games. If you blinked, you probably missed Eric in the Vermont lodge of nations, but this year of Paradise seemingly has been his time to shine. However, as next week's episode preview suggests, Eric reacts so strongly to being torn between two women that he seems to have some sort of physical breakdown.

I have my fingers crossed that whatever is going on in that clip isn't too serious or harmful, but seeing as Eric is still posting his usual inspirational content on Instagram, he seems OK now. As for clues of whether he's dating anyone in Bachelor Nation, we're out of luck. Eric has become famous in the franchise for posting motivational messages and fitness photos, and personal divulges are few and far between.

He's staying tight-lipped on his romantic drama, but Eric has alluded to breaking Angela's heart in favor of going out with Cassandra in another Instagram post. After Aug. 28's episode aired, he posted a lengthy caption that seemed to address the drama that the Paradise episode ended with, writing:

In your journey to wherever you want to go; challenges will be there, uncomfortable moments will happen but it’s for the greater good of your development. Don’t let a set back, a painful experience, or any hardships stop you from growing and becoming better. If it was easy everybody would do it, but then again everything is not for everybody.

Normally, I'd assume this was just Eric's regularly scheduled programming, but at the end of the message, he tossed in the hashtag #movewiththecheese, which has become a weird inside joke on this season of Paradise. Kenny and Eric's late-night conversation about cheese led to a credit scene of contestants discussing which cheese they would be, and Eric and Angela's date then involved a surprise delivery of fancy cheeses. Does Eric's hashtag mean that he intends the caption as a statement about how he treated Angela?

Of course, we don't know how well Eric's date with Cassandra goes yet, but judging by the promo, Eric definitely enjoys it enough for Angela's hurt feelings to become a major plot of the episode. While he's posted reunion pics with fellow Bachelorette men DeMario Jackson and Diggy Moreland this summer, the only Paradise lady to pop up on his Instagram page lately is everyone's queen, Bibiana Julian. If we get a post-show plot twist of Eric ending up with Bibi, I'm definitely not complaining. Let's root for this friendship to stay strong if long-term Paradise romance isn't in the cards for Eric.

Season 5 of Bachelor in Paradise continues on Monday, Sept. 3 at 8 p.m. ET on ABC.