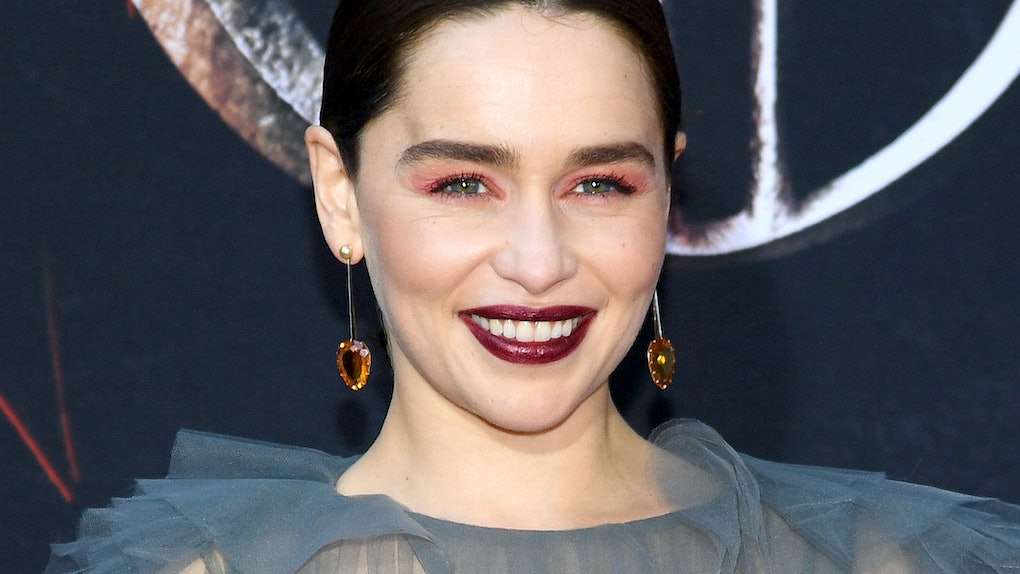 Is Emilia Clarke Single In 2019? Her Celeb Status Complicates Her Love Life

The mother of dragons is up for her last Emmy for her role in Game of Thrones. Spoiler alert: The series finale of the game-changing HBO series showed Daenerys Targaryen having a... uh... not great breakup with Jon Snow (hello, knife to the heart!), but what about Emilia Clarke's dating life? The actress keeps the details of her love life largely private, but she's dropped some hints this year as to who she's been connected to. So is Emilia Clarke single now? Here's what you need to know.

Clarke has been linked to famous names in the past. She previously dated Seth MacFarlane of Family Guy fame from 2012 to 2013, but the long-distance thing didn't work for them. She didn't talk about their relationship until three years later, in a cover interview with Glamour, where she talked about fans seeing her in public and giving her unsolicited dating advice while she was in a relationship with the comedian.

"Well, a con is you have strangers giving you love-life advice like, 'I'm a big fan of the show, and I'm not sure what you're doing with that guy,' which I didn't react well to," she said of dating a fellow famous person. "That happened in New York when Seth and I were together. This guy started to give me advice: 'Can I get a selfie? And by the way…' Unh-unh, bro." She also said in that same 2016 interview that she wasn't dating anyone at the time.

Fast-forward to 2018, however, and Clarke was reportedly dating film director Charlie McDowell. In her birthday Instagram on October 24, 2018, she posted a photo of her and an unidentified person's shadows kissing on the beach and wrote, "Well that was a birthday I won’t be forgetting in a while."

Clearly, no one's faces are visible in the shot, but McDowell posted the same photo on his Instagram a couple of hours later, according to Harper's Bazaar, saying, "Happy birthday, E." He eventually deleted the post, but it was enough to suggest that he and Clarke were together.

There were some more Instagram interactions following this birthday post, but by March 2019, those interactions had ended. Now, the two don't follow each other on Instagram, so it seems that their reported relationship has ended, and it also seems that Clarke is currently single.

Whomever she ends up dating next probably won't be an actor, though. In a 2017 interview with Elle, Clarke said she made a rule for herself that she wouldn't date people with the same job as her anymore. (She also hinted that she's dated famous people other than McFarlane.)

"It's funny," she said. "I've dated other people, but he was the only one that the internet found out about. But I kind of set myself with a little rule this year: NMA. No More Actors. And yet it's almost the only bloody choice; they're practically the only people I know!"

Given that she's successfully kept her other high-profile relationships a secret, I doubt her fans would be the first to find out whomever she's tied to next.

More like this
Here's Why Harry & William Will Not Walk Together At Prince Philip's Funeral
By Brandy Robidoux
Shonda Rhimes' Quote About Regé-Jean Page Leaving 'Bridgerton' Is SO Shonda
By Rachel Varina
The CW's ‘The Powerpuff Girls’: Cast, Release Date, Trailer, & More
By Rachel Varina and Ani Bundel
Stay up to date