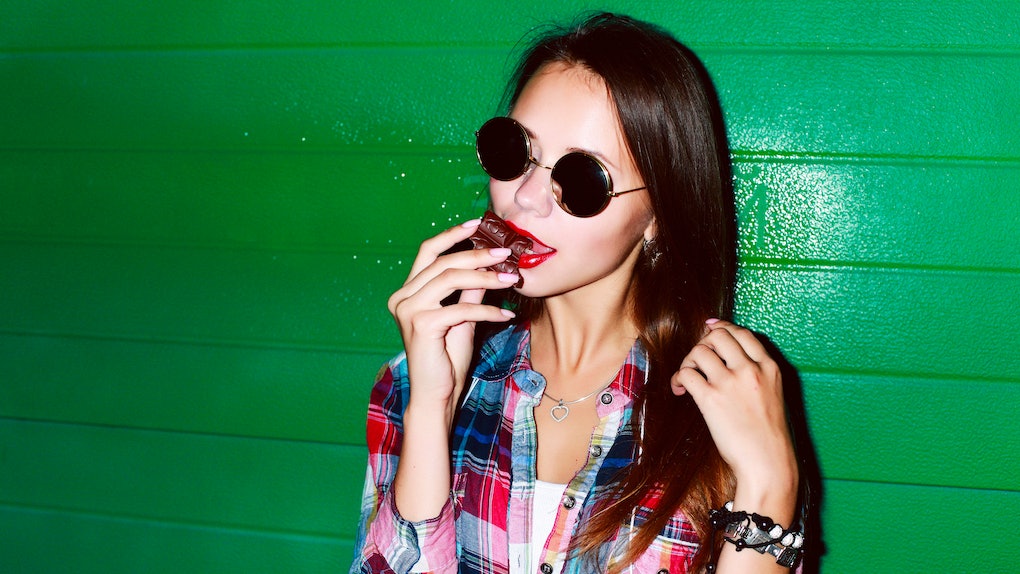 Is Dark Chocolate Good For You? Science Is Working On Making It A Legit Health Food & We're So Here For It

For the record, I’ve considered dark chocolate part of a well-balanced diet ever since the day my taste buds were blessed with its rich, cocoa flavor, so it’s about time science caught up with me. Now, apparently, Mars and other brand-name chocolatiers have been on the ball for more than three decades, funding a plethora of health studies on the DL to prove once and for all that dark chocolate does the body good. So while there’s a major back and forth phenomena that asks the question, "Is dark chocolate good for you?" according to these scientific confectionary finds, we may finally have a definitive answer.

The term “superfood” is a pretty new-agey expression you see get tossed around a lot in the health and wellness space. In 2017, we saw items like avocados, acai, kale, spirulina, and turmeric hold the superior title, but it’s also worth noting that cacao has been ruled as a fantastic addition to the health-conscious diet. And, as it turns out, this isn’t a coincidence.

According to Vox, dark chocolate has been “catapulted” into the superfood category as a result of Big Chocolate’s investment in health science. Not only was this a way to shed light on the many benefits of dark chocolate, it was also a brilliant marketing ploy, because if something as delicious as chocolate is healthy, why would anyone pass up on the indulgence?

Dark chocolate is nutrient-dense and packs a ton of good-for-you benefits.

An apple a day keeps the doctor away, but dark chocolate is good for gut health. Who knew?

Medical News Today reports that scientists from the Department of Food and Nutritional Sciences at the University of Reading in the UK have performed a series of studies focusing on how eating a lot of cocoa can directly improve your gut health. According to their research, volunteers who drank high-cocoa chocolate milk for a duration of four weeks showed higher levels of probiotics in their intestines, and additional research proved that components of cocoa have the ability to reduce growth of harmful bacteria.

In addition to being an excellent source of probiotics, dark chocolate is also swarming with antioxidants, specifically flavonoids and polyphenols, which basically attack free radicals before they get the chance to be potentially harmful on the human body.

Eating a little bit of dark chocolate every day is also good for your heart.

If you thought health and wellness gurus were gaga for superfoods, let’s talk healthy fats.

One of the main reasons why people are so cautious about eating an abundance of chocolate is because it’s a super decadent treat high in saturated fats, which, according to The American Heart Association, should be limited in your diet. However, it turns out cocoa butter, in moderation, is actually quite good for your heart.

Rodale’s Organic Life reports that one-third of cocoa butter fat is actually composed of stearic acid, which converts to the healthy monounsaturated fat otherwise known as oleic acid that lowers bad cholesterol. Still with me?

In addition to decreasing bad cholesterol in order to encourage the production of good cholesterol, dark chocolate also has a hand in the inner workings of your bloodstream. According to Healthline, flavanols in dark chocolate fuel the lining of your arteries to produce nitric oxide and lower blood pressure.

Of course, like anything else, dark chocolate should still be consumed in moderation.

OK so now that we’ve officially been granted the go-ahead to indulge in dark chocolate at least once a day, let’s not get ahead of ourselves.

As healthy as it may be, chocolate is still chocolate. So even though it’s super tempting to swap cocoa for, say, a piece of fruit now that you know more about its health benefits, you still need to be mindful of the types of dark chocolate you're eating, and how much is the appropriate amount.

According to Vox, nutrients of dark chocolate's flavanols are often destroyed during chocolate processing, which means any mainstream candy bar you'd find displayed at the checkout line in your grocery store is probably a no-go. Instead, be on the lookout for chocolate products that boast a minimum of 70 percent pure cocoa.

While the bitterness of dark chocolate is definitely an acquired taste, I can honestly say I practice what I'm preaching here. Milk chocolate used to be my jam, until I learned about the many health benefits a darker slice could provide for me.

My advice to all of you chocolate bar connoisseurs clinging to milky variations? Start slow — add a tablespoon of raw cacao powder to your smoothies, for example, or swap store-bought chips for broken up pieces of dark chocolate in your cookie dough.

Keep in mind that too much of anything is never great for you, but if you're a chocoholic, there's no shame in celebrating (or clinging to the fact) that science is one step closer to recognizing chocolate as an actual health food staple.

More like this
The TikTok Recipe You Should Try, Based On Your Zodiac Sign
By Chelsea Jackson
These 40 Clever Vaccine Selfie Instagram Captions Deserve A Shot On Your Feed
By Rachel Chapman
The Trendiest TikTok Recipes Of All Time That You'll Want To Taste With Your Buds
By Kelly Pau
Stay up to date