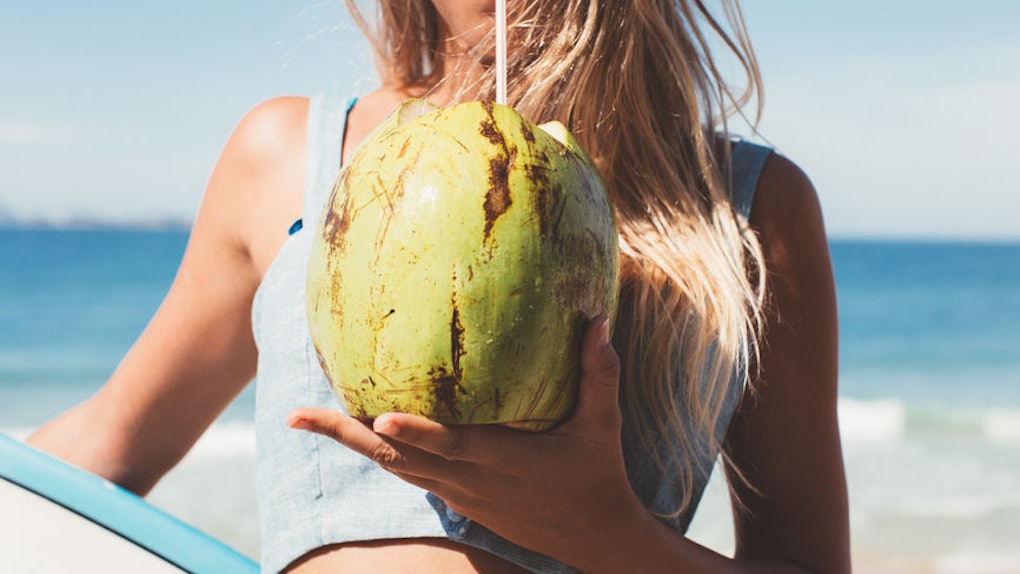 Is Coconut Oil Bad For You? A Harvard Expert Called It "Pure Poison," So I'm Not OK RN

Are you coo-coo for coconut oil? As in, do you put that ish on everything, from your breakfast toast, to the pan you bake a cake in, to your hair and skin? Well, I hate to be the bearer of bad news, but one Harvard lecturer has a lot to say on the subject of whether or not coconut oil is bad for you, and if this stuff is a staple product in your life, you’re really not going to want to pick up what she’s putting down. Of course, what sort of food you put into your body is 100 percent up to your discretion, and the way this expert is describing coconut oil might sound a little extreme, but it could be beneficial to your health to hear what she has to say.

What started as an innocent lecture to educate students (and now anyone with internet access) on the do's and don'ts of nutrition has now turned into a viral 50-minute video on YouTube entitled Coconut Oil and other Nutritional Errors. Why, yes, you did read that correctly: The way Karin Michels, director of the Institute for Prevention and Tumor Epidemiology at the University of Freiburg and professor at the Harvard T.H. Chan School of Public Health, sees it, coconut oil is, and I quote, “pure poision,” and “one of the worst foods you can eat,” Business Insider reports. Oh no she didn’t, amirite? But alas, yes. Yes she did. Unfortunately, the entire video is in German, but clearly, Michels' message has been universally received.

It seems that the argument Michels wanted to make in her lecture was that coconut oil is loaded with fat — the healthy kind (unsaturated fat), and the not-so-healthy kind (saturated fat). According to Business Insider's translation, Michels stresses that coconut oil isn’t good for you because of its high saturated fat content, which apparently just so happens to be higher than the saturated fat content in the butter you spread on your blueberry English muffin in the morning, and even lard. So, OK, yes, that's fair. Then she goes on to explain how saturated fat can clog your arteries (which seems to be true, though apparently it's a bit of a debatable subject), but then that somehow led her to jump to the extreme of calling coconut oil "pure poison." And finally, Twitter lost its mind over the whole thing — and rightfully so, considering it's fine if you want to point out the flaws in a food, but calling something "pure poison" seems a little excessive.

As is usually the case with any buzz-worthy food, there are two sides to every story. Listen, Michels isn’t wrong in saying that too much saturated fat in your diet could potentially lead to some nasty health problems. According to the American Heart Association, when you consume a lot of foods that are high in saturated fats, your cholesterol levels are subject to spike, causing high LDL cholesterol (aka the bad kind of cholesterol) to rise and potentially put you at risk for heart disease and stroke. So, yeah, I’d have to agree with Michels there that saturated fat isn’t exactly something you want an abundance of in your daily diet.

On the other hand, though, Robert Glatter, M.D., an assistant professor of emergency medicine at Lenox Hill Hospital, Northwell Health, says coconut oil can also be very good for you, in that it can raise the good cholesterol levels in your body. Plus, plant-based oils, including that of the coconut variety, aren't just fat, he adds. "They contain many antioxidants and other substances," Glatter tells Elite Daily, "so their overall effects on health can't be predicted just by the changes in LDL and HDL."

Overall, this is yet another prime example of the age-old saying, “everything in moderation.” Because research on coconut oil alone has only included “mostly small, short-term studies,” Glatter says, he advises using the stuff in moderation, adding that olive or vegetable oil might be even healthier options, as they are “high in unsaturated fat, which lowers LDL cholesterol and increases HDL cholesterol.” Dr. Josh Axe, D.N.M., C.N.S., D.C., founder of Ancient Nutrition and DrAxe.com, agrees, adding that, in general, you should aim to include “a variety of different fat sources into your diet, such as quality coconut and olive oils, olives, avocado, nuts and seeds, dairy, eggs, meat and fish."

“Today, most international dietary guidelines recommend enjoying saturated fats in moderation, which could include coconut oil,” Axe tells Elite Daily. And because organizations like the American Heart Association aren’t telling people not to consume saturated fat at all, but instead, to limit their daily saturated fat intake to around 30 grams per day for men or 20 grams for women, Axe explains, cooking with a tablespoon or so every once and a while is probably nothing to worry about.

Of course, if you're still unsure whether or not you, personally, should be consuming coconut oil in any capacity, it can't hurt to talk with your doctor about the food's pros and cons. The best thing you can do for your body is listen to it; embrace what works, eliminate what doesn't, and always do your own research, because coconut oil definitely isn't poison, but it's certainly not perfect, either.