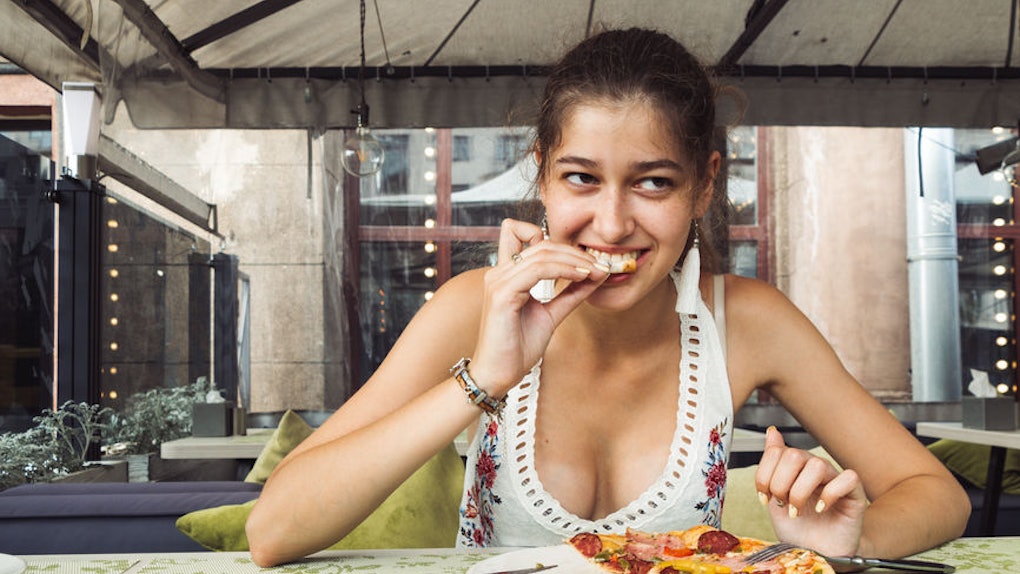 Is Cheese Good For Your Health? It’s Better For Your Body Than You Think, Study Shows

You may remember one of the great moments from 30 Rock when Liz Lemon, played by Tina Fey, is lying on her couch and singing about "workin' on my night cheese," while snacking her way through her nightly (literal) block of cheddar. Now, as someone who struggles to digest dairy, cheese has never been my number-one snack bae, but as Liz showed, there are definitely some devoted cheese-lovers out there. To those of you who live and breathe cheese, I say, rejoice, because as it turns out, cheese is legit good for your health, according to the results of a new study — specifically, it's said to be great for your heart health.

The study, which has been published in The American Journal of Clinical Nutrition, looked at the various effects that different types of dairy can have on a person's health, and found that cheese, specifically, brought the best goods. According to the study's abstract, cheese affects the body differently when you eat it, at least compared to other kinds of dairy, like butter, for instance. "It is unknown whether the effect is specific to fat interaction with other cheese nutrients (calcium, casein proteins), or to the cheese matrix itself," the researchers wrote.

And what the heck is a "cheese matrix," you may ask? According to Business Insider, the cheese matrix is just a fancy-sounding way to refer to the nutritional makeup of the cheese itself. But can we agree it definitely makes the food sound way cooler than ever before?

So here's how the study was done: Over the course of six weeks, researchers in Ireland monitored the heart health and cholesterol levels of 164 volunteers, all of whom were considered to be at an unhealthy weight. These participants were divided into four groups: One group was told to eat 120 grams of cheddar a day, along with their usual diet; the second group was instructed to eat reduced-fat cheddar and butter; the third group consumed a combo of protein powder and calcium supplements (which, Business Insider reports, was meant to mimic the nutritional makeup of actual cheese); and the rest of the volunteers ate no cheese at all throughout the six weeks.

At the end of the six weeks, the researchers found that the volunteers who ate their dairy via big chunks of full-fat cheddar cheese had much lower cholesterol levels than the participants in the other three groups. Plus, as Business Insider reports, eating a lot of cheese seemed to have "a protective effect on the heart."

Now, while the researchers made it clear that they aren't totally sure why cheese has these effects on the body, they suspect it has something to do with the structure of the cheese itself, and how the protein and fat works together to be digested. However, it's important to point out that, according to Business Insider, apparently a lot of people in the no-cheese study group dropped out before the six weeks were over (I mean, #relatable). For this reason, lead study author Emma Feeney, an assistant professor in the School of Agriculture & Food Science at University College Dublin, told the outlet that her team's results aren't necessarily conclusive. Still, this definitely raises an interesting point about a food that's so delicious, but also so often associated with only negative health effects.

So what do other food experts think about all of this? Well, for one thing, Philadelphia-based nutritionist Jenny Friedman tells Elite Daily over email that she's always been a big advocate of cheese, vegan trends be damned. In fact, she tells me she used to be a straight-up cheesemonger herself. So, cheese-wise, she's pretty cheese-wise. (Sorry friends, I had to.)

"Cheese can easily be incorporated into a healthy, balanced diet," Friedman says. "It has a ton of nutritional benefits. First, it's a minimally processed food, and whole foods always impart a lot of health power. Cheese is an awesome source of calcium, so it's great for bone health."

On top of that, she explains, it also provides a nice dose of protein and healthy fats, both of which help you feel full and satisfied. Cheese also provides a fair share of other nutrients, Friedman adds, such as vitamin A, vitamin B12, phosphorus, and zinc.

And if you're worried about the fat content of cheese, the nutritionist says you really don't have to sweat it. "Soft cheeses such as mozzarella, feta, and fresh goat cheese are actually relatively low in fat," she tells Elite Daily. "For those with lactose intolerance, cheese isn't totally off-limits. Hard, aged cheeses such as parmesan, cheddar, and some goudas are very low in lactose. Sheep and goat cheese is also usually better tolerated." OK, I am definitely taking note of that.

As for how to include cheese in your diet in healthy, yet still totally delicious ways? According to Friedman, the possibilities are truly endless. "A string cheese or the round Babybel cheeses wrapped in wax are awesome, nutritious snacks that are convenient and really tide you over when you need it," the nutritionist says. "Cheese is also a common component of breakfast, paired alongside some seeded bread in many cultures." She recommends treating yourself to a picnic-style lunch or snack by gathering a bunch of crackers to pair with your cheese. Ugh, yum.

Best of all, she says, you can also go ahead and toss a little cheese into a salad to make an otherwise bland meal totally delectable. "A little goes a long way," Friedman says. "Strong flavored cheese like feta or blue cheese really makes a salad pop and provides extra satiety, taking it from a side to a meal. You don't need a ton to make an impact."