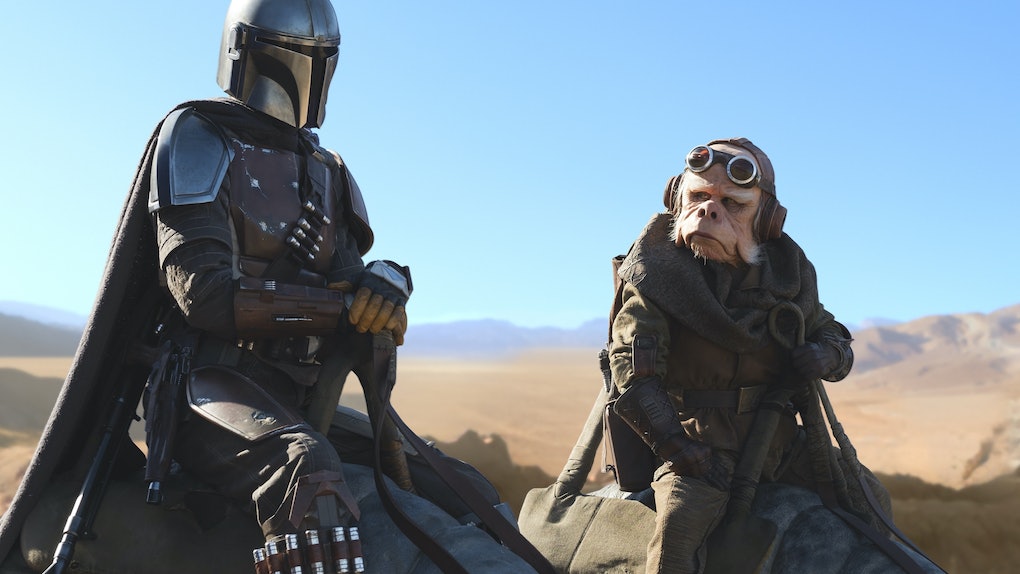 Is Baby Yoda A Jedi In 'The Mandalorian'? It Seems The Force Is With Them

If the trends on Twitter are anything to go by, The Mandalorian is a big hit for Disney+. It helps the service launched with Episode 1, "Chapter 1," on Tuesday, Nov. 12, and then followed it up with Episode 2, "Chapter 2," on Friday, Nov. 15, giving viewers a double dose the first week. But fans are going to be tuning in every week for a dose of Baby Yoda.* Chapter 2 had fans asking is Baby Yoda a Jedi in The Mandalorian? Warning: Spoilers for The Mandalorian Season 1 follow.

Baby Yoda* is quite possibly the cutest character Star Wars has come up with since the invention of the Ewok. R2-D2 long ago went from cute to Elder Statesmen Canister, BB-8 has round ball attitude to spare, but Baby Yoda has that "kick you in the stomach" level of adorable that kitten and puppies are famous for. But this episode revealed that Baby Yoda is also a young badass.

*Reminder "Baby Yoda" is called that at this juncture because no one knows what species Yoda's people are, or what gender the baby is.

Audiences suspected this 50-year-old baby might have hidden talents, considering the sheer number of bounty hunters that have been sent after it. That didn't stop in Episode 2. The first thing the Mandalorian has to do is fight off a couple of Trandoshan, with a bounty fob. It seems there are many different parties interested in getting their hands on this cutie pie.

Unfortunately, Jawas have been at the Razor Crest ship since the Mandalorian's been away, and by the time he gets back, they've practically stripped it to a skeleton. The Mandalorian tries to chase them down, and nearly succeeds in taking their ship, but it is not to be.

As he tries to treat his wounds, Baby Yoda keeps climbing out of their floating cradle and waving their hands, like they could heal him if they could reach the Force. But the Mandalorian doesn't know what his charge is doing, and keeps firmly placing the child back in their seat.

With a little help from the Ugnaught, Kuiil, the Mandalorian manages to make a deal with the Jawas. He'll get them the egg of a Mudhorn Beast, and they'll give him back all the bits of his ship. Unfortunately, the beast is tough to kill. The Mandalorian charges at it again and again, but it's clear he's losing. Until Baby Yoda sits up, reaches out, and suddenly, there's a floating Mudhorn Beast, uselessly waving its legs.

But what really blew away fans is the Mandalorian has no idea what the child did. It seems with the death of the Jedi, there's an entire generation who know nothing of the Force. If the sheer amount of bounty hunters is any indication, there are many out there who want to keep it that way.

More like this
Who Is Lady Bidlow On 'The Nevers'? She's Clearly Not Who She Seems
By Ani Bundel
What Happened To The Waterfords In 'The Handmaid's Tale' Season 3? A Lot, TBH
By Ani Bundel
'Cobra Kai' Season 4: Netflix Release Date, Cast, Trailer, Plot, & More
By Ani Bundel
Stay up to date