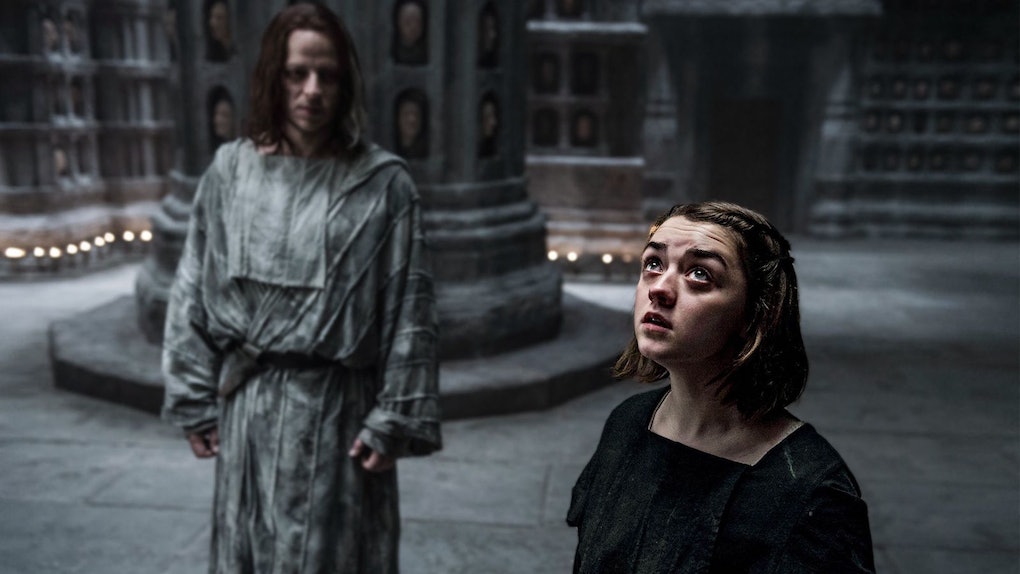 Is Arya Jaqen H'ghar? This 'Game Of Thrones' Theory Might Convince You

The character that every Game of Thrones fan is obsessing over right now is Arya Stark, who just secured her place as one of the deadliest assassins in Westeros in the Battle of Winterfell. But Arya's deceitful abilities and shady past actually have some fans theorizing about what could really be going on with the youngest Stark sister. After her training with the Faceless Men of Braavos, there is a potentially game-changing theory that asks is Arya Jaqen H'ghar. Because of their shared abilities, it could be possible, and it might explain Arya's changed temperament since returning from Braavos.

Arya Stark first met Jaqen H'ghar all the way back in Season 1 when he was a strange prisoner of the Lannisters. After Arya saved his life, Jaqen gifted Arya with three kills, and then revealed the truth that he is actually one of the Faceless Men of Braavos, with the ability to change his identity on a whim. Eventually, Arya meets up with Jaqen again in Braavos to train under him in the House of Black and White.

It is over the course of this training that a number of fans have put forth some pretty shocking theories. The bulk of these theories suggest that Arya died during her Faceless Men training in Braavos, and that the Arya on the show now is actually someone else in disguise. An important scene for this theory is the Waif stabbing Arya in the stomach after she went blind, which would severely weaken her and makes it difficult to believe that Arya would go on to defeat the Waif in combat shortly after. We also do not get to actually see the fight between Arya and the Waif that ends with Arya hanging the Waif's face in the Hall of Faces. Because of this, some fans have put forth the idea that the Waif could have actually killed Arya and disguised herself as her.

Fans have also pointed out that Arya actually fails at Jaqen's training multiple times — she backs out of two assigned assassinations, kills a man she was not told to kill, and never fully relinquishes her identity. In the end, we see Jaqen send her off despite the fact that she did not pass the tests to become one of the Faceless Men.

That is where another theory comes in. What if Jaqen actually did not send Arya off, but decided to assume her identity and go in her place back to Westeros. Jaqen seemed suspiciously chill about Arya refusing to fully become "no one," which could mean he actually had other plans in mind the whole time.

Of course, there are a lot of holes that you can poke into this theory. For one, we see Arya's direwolf Nymeria recognize her in the woods after she left the House of Black and White, which probably would not happen if Arya was really Jaqen in disguise. Plus, there is the question of why Jaqen would want to assume Arya's identity and travel to Westeros in the first place. He already repayed his debt to her, so he would not be completing her list as a gift, and he is probably not seeking revenge on his former captors the Lannisters since he does not seem like the type to hold a grudge.

And honestly, I just can't get behind the theory since it would rob Arya Stark of her badass Night King kill. Jaqen really could be lurking anywhere, though, so don't be surprised if he does pop up in the final few episodes.