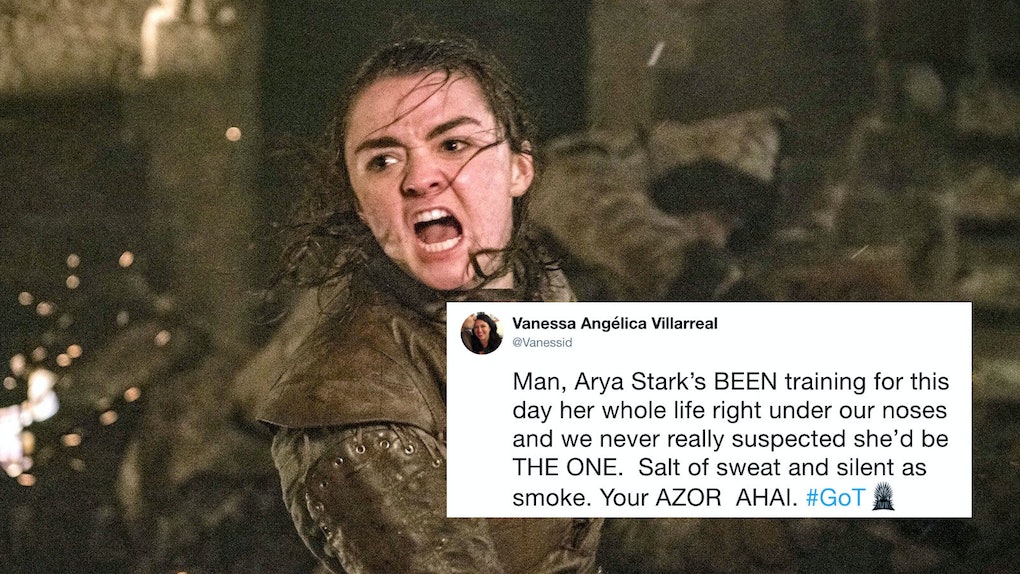 After eight years of anticipation, Game of Thrones finally unleashed its most epic episode ever on its fans this Sunday night. The people of Westeros and the Night King's army of the undead had their cataclysmic clash in the Battle of Winterfell, and the final moments of the death-filled episode also seemed to confirm one of the most important theories in all of Game of Thrones lore. Fans were quick to react to the prophecy-fulfilling twist, and these tweets about Arya being Azor Ahai in Game of Thrones show that the fandom is still reeling.

Spoiler alert: This post contains spoilers from Game of Thrones Season 8 Episode 3, "The Long Night." The prophecy of Azor Ahai has been one that has hounded fans of both the Game of Thrones books and TV show for years now. Azor Ahai is explained to be an ancient hero in the faith of the Lord of Light who brought an end to a great darkness fallen upon the world with his sword Lightbringer. The lore also claims that Azor Ahai will be reborn as the Prince That Was Promised, who will destroy another potential Long Night. Fan theories have run wild over the years trying to figure out who the reborn Azor Ahai could be, with Jon Snow and Daenerys Targaryen seeming to be the two most likely frontrunners, but the Battle of Winterfell showed that Arya Stark was actually the person to kill the Night King and bring an end to the Long Night.

Most fans did not predict Arya to fulfill the Azor Ahai prophecy, but there were some clues leading up to the climactic moment earlier in the new episode. Melisandre shared a long, knowing look with Arya when she first arrived in Winterfell, and she later confirmed to Arya that Beric was only resurrected by the Lord of Light so many times so that he could sacrifice himself to protect Arya.

Much of the fandom is still trying to work out how Arya fits into the Azor Ahai prophecies, but most people are just celebrating the Stark warrior's greatest triumph.

Although it is still not super clear how the Azor Ahai prophecies may relate to Arya, fans have pointed out some possibilities — this prophetic language is purposefully cryptic, after all. First, Missandei previously noted that the translation of the Prince That Was Promised is actually a gender neutral term in its original language, which first seemed to suggest Daenerys would fulfill the role, but now garners further proof of Arya's status as Azor Ahai.

Azor Ahai was also prophesied to be reborn amidst smoke and salt. Although Winterfell does not seem to fit that description, there is still a way that this prophecy fits in with Arya's story. Throughout the series, Arya has been reborn as a face-changing assassin, through the salt of her sweat and making her as silent as smoke. She also shed her name to become No One when her training was complete.

The only remaining question is that of Lightbringer, the flaming sword Azor Ahai is said to wield against the darkness. Arya used her Valyrian steel dagger to kill the Night King... so, was that Lightbringer? Azor Ahai was prophesied to forge Lightbringer by killing a loved one, which Arya has not done. There are still some loose ends to tie up, but it does seem very clear that Arya has prevented the Long Night by killing the Night King, which is what truly makes her Azor Ahai, regardless of any prophecies.

More like this
These 'The Nevers' Theories About That Flying Ship Are Absolutely Bonkers
By Ani Bundel
These Tweets About Regé-Jean Page Leaving 'Bridgerton' Are Royal Bummers
By Cianna Garrison
Netflix Renewed 'Bridgerton' For Seasons 3 & 4, Likely With More To Come
By Ani Bundel
Stay up to date