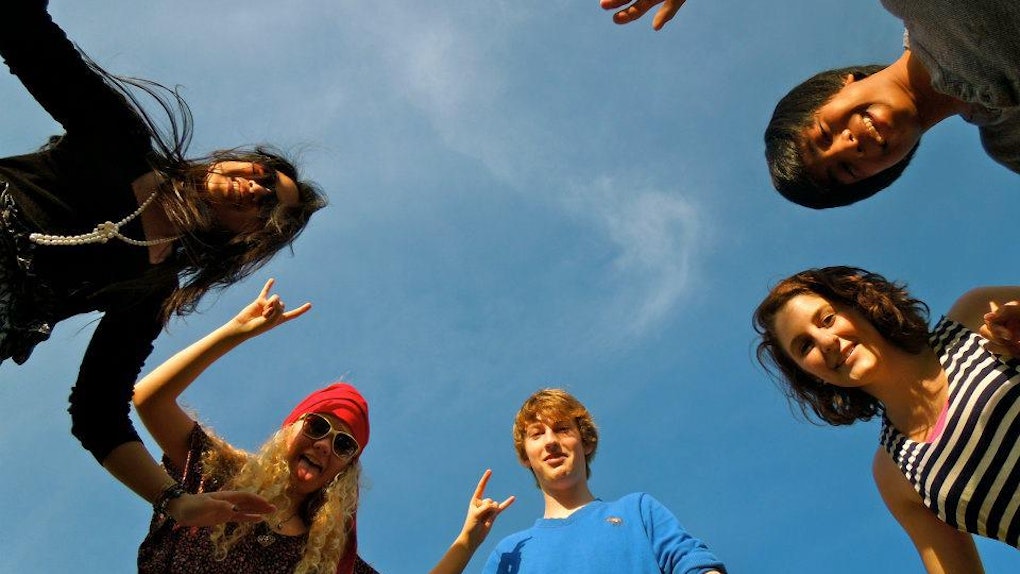 I'm one of those people who always wanted to belong to a friend group. I changed schools a lot when I was younger, and had a pretty rigorous extracurricular schedule, so I think that's why I never got to spend a lot of time with one particular group of my peers. But things changed during my junior year of high school, all because of the amazing group of people who became my lifelong friends. I'm still close to my high school squad, and it's the only real friend group I've truly felt part of.

Growing up, I had a lot of temporary friends, but never found the people I thought I'd be friends with for the rest of my life. It seemed like every time I found people I loved, we ended up growing apart for one reason or another. I never expected to find such an amazing group of friends in high school, but they are still some of the closest people in my life to this day.

I'm so grateful to have met these wonderful human beings. Even though we don't see each other much anymore, we all know that we're there for each other if we're ever in need, and that's everything to me. I'm so honored to have them in my life.

We used to call ourselves the "JARKS."

My junior year was the birth year of the "JARKS," which is an acronym of our first names, and was the way we referred to our friend group. I had met each person in our group in different capacities throughout my life, but it wasn't until junior year when we became a real squad.

"J" is for Jon, who's my little brother. (Obviously, I've known him my whole life.) "A" is for Amber, whom I met when we both started at my second high school. We were transfer students from other high schools and bonded immediately. "R" is for Ryan, who, at that point, had already been my best friend for two years; we met doing a community theater production. I'm the "K," of course, and "S" is for Sandrinne, whom I grew up singing and performing with.

We already knew that we clicked, but we really came together out of necessity. My junior year was a very dramatic one at our high school, and we all turned to each other for support. Little did we know that these friendships would last as long as they have.

We don't see each other on the regular, but we still keep in touch and show an endless amount of support.

Our lives have taken us in different directions, but we've somehow managed to keep in touch and stay close. Of course, Jon is always around because we're family, and I know that he tries to keep in touch with everyone else as much as he can. Amber is the person I see the least because she has been in nursing school and now lives in San Francisco, but we still love to call each other and catch up. She recently got engaged and is now a practicing nurse.

Ryan and I try to see each other as much as we can. Even when we both lived in NYC, it was hard to carve out time in our busy schedules. Plus, we both travel a ton for work. Sandrinne recently graduated college, and is now living in my old apartment in NYC.

I try to see everyone when I'm in the same city as them, even if it's just one-on-one. Of course, I'd love for all of us to get together as a group again, but I'm so happy to see them individually, too. We always pick up exactly where we left off, even if we haven't seen each other in a few months.

This is the only real friend group I've ever been in, and I'm totally OK with that.

I have not found a group of friends as tightly knit as the JARKS were since I left high school. I definitely had some key friends in college, but even then, I would still chat with the high school squad whenever I had news that I thought they'd really appreciate.

Even eight years later, I still value their opinions and want to tell them everything about my life. I even picture them in my wedding party, and know that they feel the same way about me. I'm so thankful to have found such a solid group of friends who will be there for me through the rest of my life.

More like this
How You Love To Be Spoiled, According To Your Zodiac Sign
By Roya Backlund
25 'Schitt's Creek' Quotes For Graduation & Loving This Journey For Yourself
By Rachel Chapman
19 Unique Spring 2021 Drive-In Experiences Across The US That Are Great For Date Night
By Rachel Chapman
Stay up to date