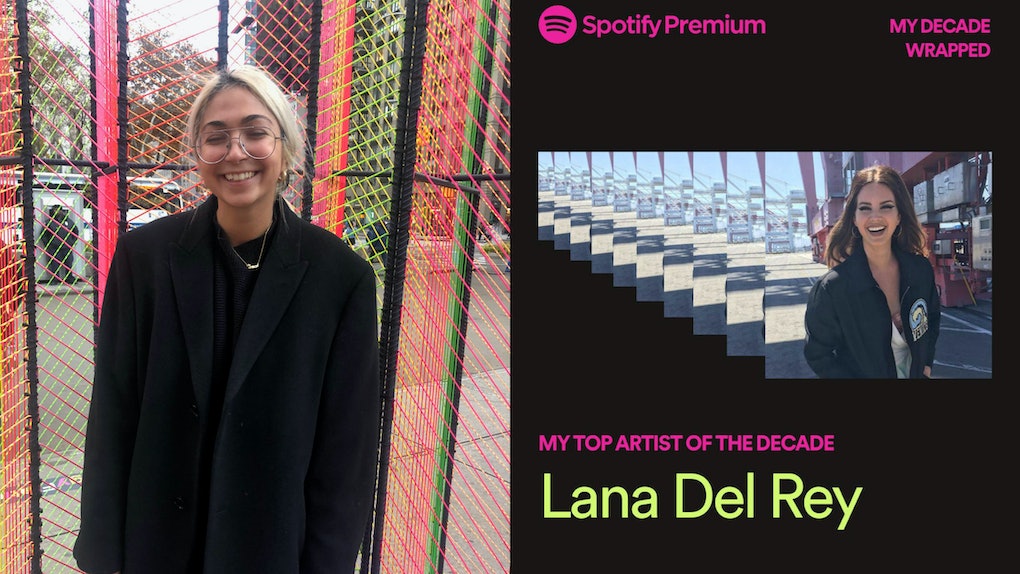 If Your Spotify Best Of The Decade Makes You Nostalgic For Your Ex, Try This

Today, in unsurprising news, my phone informed me that my Spotify "Best of the Decade" artist was Lana Del Rey. This was in no way shocking intel — I've been following Lana Del Rey since the turn of the decade, back when she was going by her legal name, Lizzie Grant. I've seen her perform live five times (including that infamous SNL gig), and I'd wager that I could sing 90% of her songs from memory. But as I scrolled through the playlist, one song stood out from the rest: "Lolita," from Del Rey's debut album, Born To Die. Even reading its title sent tiny beads of anxiety-induced sweat down my forehead. Suddenly, I felt as if I was starring in my own black-and-white movie; the kind that requires subtitles and dramatic orchestral interludes. Folks, I was absolutely and completely overcome with nostalgia.

The summer we began seeing each other (read: hooking up in pantries) coincided with the 2012 release of Born To Die. I can vividly recall slipping into my denim short-shorts, a push-up bra, and skimpy tank-top, then rushing out of the house to meet him. I'd throw on my headphones, which were plugged into my phone through a wire, and hit play on Lana's latest. "Kiss me in the D-A-R-K dark tonight," she'd croon. "Kiss me in the P-A-R-K park tonight." This is so me, I'd think to myself, skipping into Central Park in the dead of night. I'd meet him there, and we'd sit on a bench and play tonsil hockey until midnight, or we thought we heard a rat — whichever came first.

To me, "Lolita" sounds like sweaty palms, Old Spice deodorant, and puppy love. So, to say seeing it pop up on my Spotify playlist triggered some serious nostalgia would be an understatement. According to Jude Treder-Wolff, a licensed clinical social worker, certified group psychotherapist, and music therapist with 30 years experience using music and the arts in therapeutic work, this isn't out of the ordinary. Wolff tells Elite Daily that music a direct pathway to a person's heart — literally.

"Emotions are associated with the limbic system of the brain, which is a rich network that connects with the physical, sensory, and cognitive functions," she says. "The limbic system is a bit like the wiring in the walls of a house that conducts electricity. Music 'flips the switch' and ignites physical responses, thoughts, imagination, and feeling in a highly integrated way."

Wolff goes onto explain that memories with a strong emotional component can be easily cued up by the music associated with them because our brains are designed to emotionally react to our own thoughts. For example, when you think about eating a lemon, your brain will automatically remember the sour taste and release a little saliva. This is, in essence, nostalgia: the imaginative reliving of past emotional reactions. Thinking about a lemon triggers the body's response to an actual lemon, because of the brain's association with the limbic system. Similarly, thinking about past events can stimulate old emotions, as if the events were recurring in the present moment.

"Songs are a kind of soundtrack to our lives," Wolff says. "Just as a song underscoring an emotional narrative in a movie heightens its meaning and power, the songs that are part of important experiences become hard-wired into the movie of our own life. Music activates the whole-brain response, so a song can instantaneously travel the limbic system and 'light up' the memory associated with it, bringing the memory of a person we rarely think about to the screen of our conscious mind."

Tegan, 25, relates to the experience of listening to music that triggers old memories. In fact, she tells Elite Daily that she can no longer play "Hop Along" by Tibetan Pop Stars without being reminded of an ex from college. "[They] introduced me to this album, and I spent my freshman year listening to this song on full blast, on repeat," She says. "The relationship didn’t end well (really, it wasn’t good throughout), and the emotions behind this song encapsulated all the feelings about the relationship I wasn’t ready to say out loud. Over five years later, it’s still one of my most-played songs. I still listen to it!"

Of course, music doesn't always have to provoke nostalgia of negative memories or associations. Although my relationship with my high school boyfriend didn't end with me walking down the aisle, "Lolita" still calls to mind the spark of summer love. Veronica, 25, agrees that music-induced nostalgia for an ex isn't necessarily a bad thing. "'I Don't Wanna Miss A Thing' by Aerosmith reminds me of the boy I had my first kiss with," she tells Elite Daily. "I was 15 and obsessed with him. He was not nearly as obsessed with me, but I didn't care. We watched Armageddon on the couch at our friend's house and held hands as the song played. Then we made out. It was just OK. I'm way over him now, but I can't help but chuckle every time I hear the song."

There's good news, and there's bad news. The bad news is that Wolff says that it's difficult to overcome the association between a song and a powerful emotional experience. That means that, to some degree, Veronica is stuck thinking of Billy Bob Thornton whenever she hears Aerosmith, and I'll always look around for rat droppings when Lana Del Rey begins to sing. But the good news is that there are ways to minimize the association so that it doesn't bother you or impede your ability to move on. Wolff recommends trying out the following two tactics when experiencing intense, music-related nostalgia.

"First, when a song activates longing to be back in a happy period with a person we love, reach out to someone who will be very supportive during that period of intense vulnerability and open up to them," she says. "We can layer new emotional memory onto that same stimulus. This can even be done by texting if close friends are not accessible." By adding a positive healing experience that involves a supportive relationship, the song's association can begin to evolve. Wolff also recommends reminding yourself why the relationships didn't work out while affirming your sense of self.

"Choose (or create!) songs that express who you are in the moment," she suggests. "Use music to express uncertainty and pain. Music can be a powerful way to express ownership of our own transformation, a soundtrack to our process. Taking action in a creative realm is a way of claiming and shaping our own story. Making sure the 'recovery playlist' is always available is a form of self-care."

In fact, as a songwriter who crafts love songs, I've been practicing Wolff's second suggestion for years. Being able to reframe our relationship through writing music has allowed me to gain closure, and more importantly, wholeheartedly enjoy listening to Lana Del Rey. And as the queen herself says, "You're already the coolest," even if your Spotify "Best of the Decade" playlist has you losing your chill.