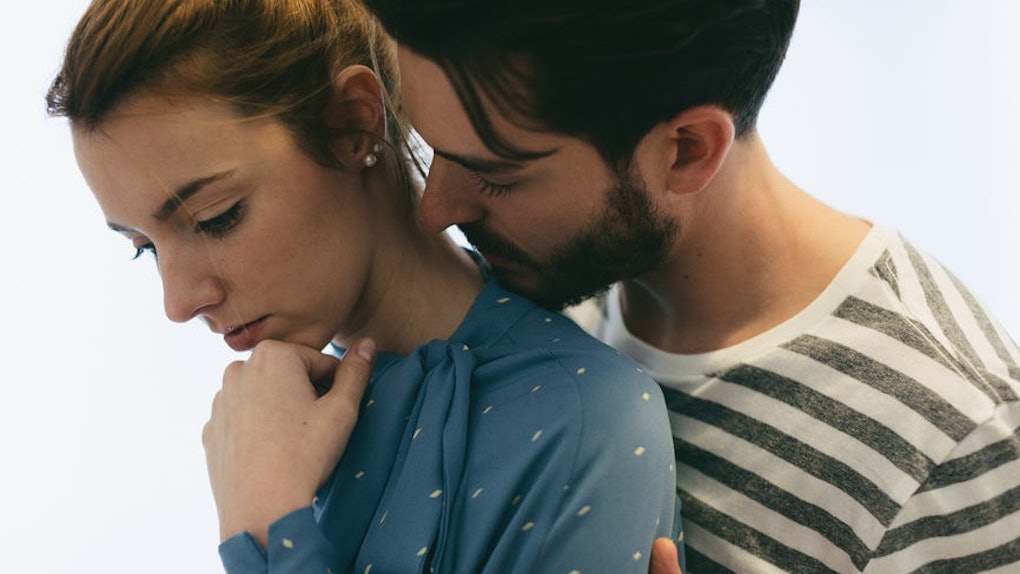 If Your Partner Never Says "I Love You," Here's The Truth About If Your Relationship Is OK

Is there anything more elating or reassuring in a relationship than hearing those three little words? Indeed, when someone says “I love you,” they’re saying a whole lot. They don’t just like you. They don’t just happen to enjoy your company for a little Netflix and chilling. They care deeply about you, they feel a strong connection to you, and best of all, they want you to know it. But what if your partner never says "I love you"? Should you be worried? Or is it possible that your relationship is still OK regardless of the fact that your SO hasn’t uttered those three little words?

Experts say that ultimately, it depends on the stage of your relationship. According to Dr. Gary Brown, a prominent Los Angeles-based relationship therapist, it’s important to consider how long you’ve been together. If they haven’t said “I love you” after a month or two, there’s no reason to worry about your relationship — even if you feel like you’re in love with them.

“Sometimes, one partner falls in love a lot quicker than the other, and the other isn't going to say ‘I love you’ if they don't mean it,” explains Chris Armstrong, relationship coach and founder of Maze Of Love. “If this is the case and they have explained that, you should only worry if the gap between your feelings and their feelings bothers or saddens you.”

However, Dr. Brown notes that if you’ve been dating exclusively for six months to a year or more and your partner still hasn’t said “I love you,” that may point to a potential issue. If that's the case, it's time to hone in on your own feelings. If you love your SO and you haven’t said it yet, either, then Dr. Brown suggests asking yourself why you’re hesitant to express your feelings.

“What’s your internal barrier? Maybe it’s a matter of your ego, and that’s why you’re hoping they’ll say it first,” explains Dr. Brown.

Alternatively, if you don’t feel comfortable saying “I love you,” perhaps it’s because you don’t feel emotionally safe with your partner. Consider whether they have been understanding, respectful, and supportive of your feelings in the past.

On the other hand, if you have told bae that you love them and they have yet to say it back, Armstrong and Dr. Brown agree that it’s worth digging for an explanation.

“In the most gentle, nonjudgemental, and non-accusatory way, ask them what those three words might mean to them,” advises Dr. Brown. “Find out whether they’re uncomfortable saying 'I love you' to people in general, including family and friends, or whether it’s specific to dating or your particular relationship.”

Dr. Brown also points out that someone may be afraid to say “I love you” if they’ve had a negative experience relating to this phrase in the past.

“Maybe it has nothing to do with you,” adds Dr. Brown. “Maybe the last time they said it, those feelings were rejected and unrequited. They may have understandable fear.”

Armstrong emphasizes that it ultimately comes down to whether or not you feel confident in your bond.

"If you believe your partner loves you and you understand why they don't verbalize it, your relationship isn't likely going to be in trouble because you've balanced their lack of saying it with your knowledge and understanding of why they don't say it," he explains.

However, if your partner doesn’t attempt to offer a reasonable explanation when you bring it up and instead tries to dodge the subject, experts agree that could be a red flag.

“If there has been no explanation and every other relationship action points to love, then worrying is understandable,” says Armstrong. “We should not have to be in a relationship in which we communicate our love for someone and face crickets in return.”

Dr. Brown adds that an inability to say “I love you” (with no reasonable explanation) after being in a committed relationship for an extended period of time may suggest that your SO has some walls up.

“There might be some part of them that’s emotionally closed off,” he says. “And then you need to consider what the other implications are for your relationship.”

While you may be eager to hear your SO tell you that they love you, you probably wouldn’t want them to say it simply out of feeling pressured. So consider it a positive thing if it’s somewhat early in the relationship and they haven’t said it — because if and when they do say it, you’ll know it’s honest, genuine, and from the heart. If you’ve told your boo you love them and are waiting for them to reciprocate that, remember that patience is a virtue — and the more understanding you are about their hesitancy or potential fears, the more likely they are to be free in expressing their love when they’re ready. Ask yourself: What are you doing to help your partner feel safe in being honest with you about their feelings?

If you’ve been dating someone for a substantial amount of time, they still haven’t said those three little words back, and it’s bothering you, don’t hesitate to ask them upfront about what’s holding them back. There’s a chance they simply need more time to be sure of their feelings. And if you haven’t said it yet yourself because you’ve been waiting on your boo to make the first move, consider this: They might be waiting for you, too. And while you may prefer to hear it first because it feels less risky, saying it first can be liberating in its own way. After all, someone has to pull the trigger — and who knows? Once you do, your boo may be massively relieved that you were brave enough to break down that barrier, and in the process, make them feel more comfortable doing the same.

More like this
Here's Why Someone Cheats On Their Partner, Based On Their Zodiac Sign
By Danielle Sinay
20 "Truth Or Dare" Questions To Text Your Crush & Get Flirty
By Rachel Shatto
The Ugly Truth: If You Cheat On Someone, You Do Not Love That Person
By Gigi Engle
Stay up to date