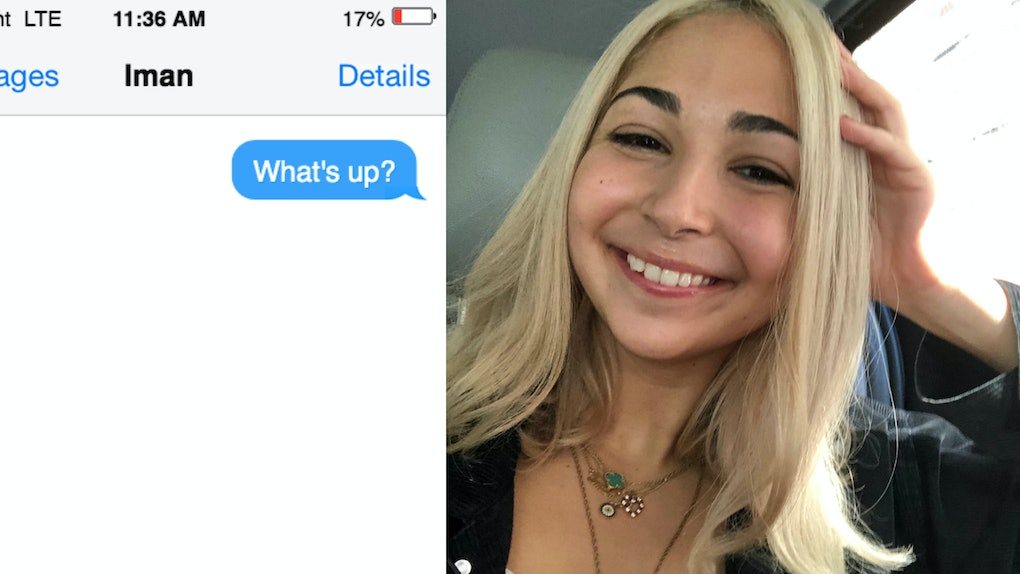 I Was Scared To Text First Until One Date Changed Everything

"How long has it been? Seven minutes? Well, he took 10 minutes to text me back, so I need to wait at least 10 minutes respond. Let's be honest, preferably 12." These are the real life thoughts that used to run through my brain when I first started dating my partner. I was so scared to text first that I would literally count the minutes like a serial killer before putting finger to keyboard and hitting send. Why? I was nervous to seem overly eager, to emotionally invest more in our budding relationship than he was. But after one great date, I had the stunning realization that would rock me to my core: When you're in a healthy relationship, it literally does not matter who texts first or fastest. Period.

The year was 2016. Donald Trump had just been named President and Harambe had been pronounced dead. I had been "casually dating" my future partner for about three months, if by dating you mean sleeping together and sometimes watching Borat with his roommates. So, I was somewhat caught off guard by this particular late-night Thursday exchange that left my texting anxiety in a frenzy.

Him (11:59 p.m.): I don't think so if that's ok. But would u wanna get dinner at Mai Thai tomorrow night? Was thinking it could be fun to hang out.

I threw my phone across the room in a panic. Was he asking me out? Were we going to hang out during the daylight hours, just the two of us? Would I burst into flames in the sunlight like a vampire? I felt a smile slowly creep over my face. I got out of bed and walked to the corner of my room, and retrieved my phone from my hamper (Honestly, nice shot). Then I proceeded to count out the perfect 20-minute grace period to respond.

I pressed send right down to the minute, like a total psychopath, then proceeded to make a list of conversation topics to insure that the date would go well and the conversation would flow as generously as the wine. I am totally normal and impeccably chill. Lucky for you guys, I still have a screenshot of said list. See below.

The next morning, I woke up glowing. Leveling up in a relationship was entirely new to me (I'm more of a die-in-the-first-round kind of gal), and I was curious to see what actually going on a date would be like. Don't get me wrong, I had dated people before — but the finest cuisine my partners from high school and freshman year of college had treated me to was fresh out of their fridge. Getting ready for a dinner date at a restaurant felt very adult, and like any average college student, "adult stuff" made me want to hurl.

I must have changed my outfit at least 20 times before settling on a grey raglan sweatshirt, white sneakers, a leather jacket, and... leggings as pants (once again, it was 2016). I kept pounding on foundation, but then nervously sweating it off and reapplying. Once my hair was fried straight and my body was doused in perfume, I strolled out the front door with the false confidence of an American Idol contestant.

I met my date outside his house. He was cleanly shaven and rocking an ironic Hawaiian shirt, which I both hated and respected. We strolled over to Mai Thai, our college campus's go-to casual Asian fusion joint. Over the course of our walk there, I managed to rattle off every single topic on my small-talk list, rendering me out of conversation ideas by the time we finally took out seats. We had a corner table by the window, and I watched as acquaintances and classmates wandered idly by, wishing I was on the other side of the glass. He ordered a beer, and I selected a cheeky mojito. With nothing left to do but panic, I blurted out the only thing on my mind.

After that, there was nothing to do but laugh. With all my cards on the table, the tension slowly began to fold. My candor had sort of wiped the slate clean, and we were able to talk open and honestly, without fear of being judged by the other. We discussed our feelings about our impending graduation and our family's expectations of us post-grad. I teased him about the dance performance he was later participating in (Rangila, look it up people!), and he grilled me over song lyrics I had written that he suspected were about him (he was totally right, BTW). One drink turned into three; instead of reaching for my phone to survey my talking points, I dropped my device at the bottom of my bag, where it stayed for the remainder of the evening.

As the night reached its conclusion, my date walked me back to my house like a gentleman. We were silent for the first time all evening, but it was the good kind of silence — sweet and simple, as if the space between us was tangible and magnetic. I felt his thumb brush against mine as he shyly took my hand in his. Feeling my cheeks begin to heat up, I turned away so he couldn't see how wide I was grinning. As we reached my door, he turned to me and said, "Now that wasn't so bad, was it?" I shook my head. "See," he squeezed my hand. "There's literally nothing to be anxious about."

He gave me a gentle goodnight kiss on my front stoop. It was such a rom-com moment that I was almost positive the dad from 10 Things I Hate About You was going to appear and call us out for our PDA. As he turned to walk away, he paused and shouted over his shoulder, "Text me!" I ran up to my bedroom, got under the covers, and replayed every minute of the night. Then, I pulled out my phone and without thinking, shot him a text.

That night, I learned two valuable lessons. A: If you're going to wear a leather jacket and a long-sleeve shirt on a first date, be prepared to keep that jacket on all night long because sweat stains. B: If you're typically riddled with texting anxiety, try to remember that the fingers typing on the other end of the keyboard are attached to an IRL human being, who is probably as nervous as you are.

Dating in the era of technology can feel isolating, but at the end of the day, we're all just people looking to connect with each other. Don't get me wrong, it can be really intimidating to put yourself out there in print, at risk of being just another screenshot that gets sent to a group chat. But this date taught me a really valuable lesson: Relationships truly are all about communication, even if that communication is virtual instead of verbal. So, if you're nervous to the point of puking, try acknowledging it! Embracing your vulnerability can be a total strength, not a weakness.

And if the person you're texting with prefers to play games, well then, maybe you're better off deleting their number — unless of course, we're talking Cards Against Humanity or Jenga. In which case, propose ASAP.