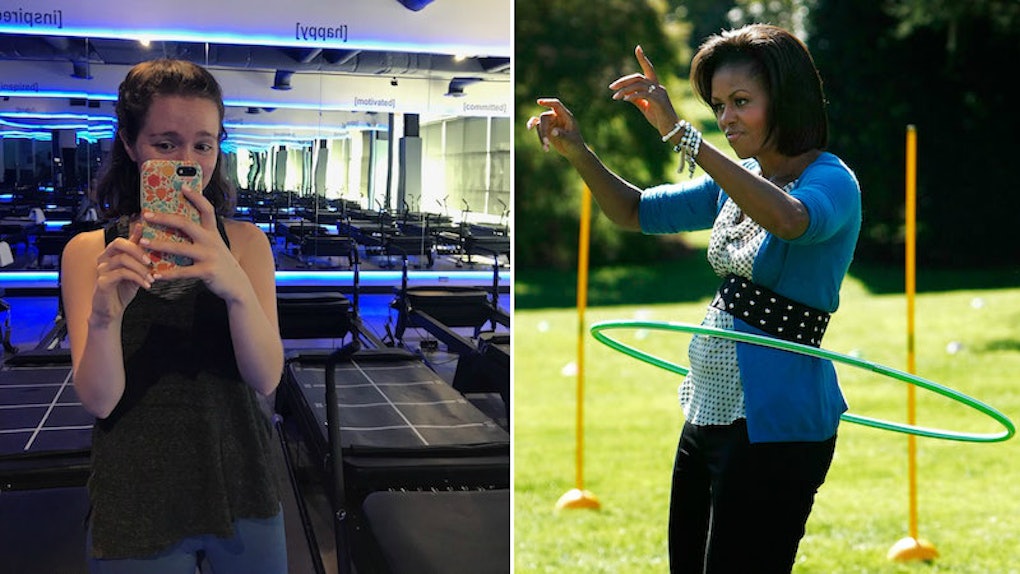 At this stage of my life, I'm not committed to any one strenuous workout routine. Thanks to a pretty busy grad school schedule, I've been trying out different kinds of exercise in order to figure out what works best for me. So when I found out about what is reportedly one of Michelle Obama's favorite workout classes — she's been spotted multiple times at a D.C. Solidcore studio, according to The Washington Post — I knew I had to try it for myself. I'm a huge fan of pretty much everything the former first lady does, and if I can one day have even an ounce of her strength, I will be over the moon.

It's no secret that Michelle Obama is a huge proponent of staying active; during her time as first lady, she launched the Let’s Move! initiative, which is all "about putting children on the path to a healthy future," according to the campaign's website. And, like I said, the former FLOTUS is apparently a big fan of Solidcore, too. According to its website, a Solidcore class involves "50 minutes of high-intensity, low-impact, slow & controlled movements," and it promises to be "unlike any workout you’ve experienced before." And, uh, after my experience, I can tell you that's 100 percent accurate.

When I showed up to the Solidcore studio in Cathedral Heights, D.C. (the class is also offered in 14 other states throughout the U.S.), I quickly realized that, of the four other people taking the class with me, I was the only newbie. But, thanks to my encouraging instructor, assistant studio manager Sophia Fellner, I was able to pick up on the basics of the pilates workout without too much trouble.

So here's how Solidcore works: The class takes place entirely atop a horizontal machine, which the studio calls Sweatlana. Basically, there's a moving platform, a stationary platform, and resistance bands, and by hooking and unhooking various hooks, you can change the resistance of the platform, and thus the difficulty of the workout. Yes, it's just as confusing as it sounds (at least at first), and I would have been totally clueless about which type of resistance to choose, if not for Fellner's careful guidance.

Now, while Solidcore is based on pilates principles, Fellner tells me it's not exactly your standard pilates class. "As opposed to traditional pilates or similar methods, each move at Solidcore has the foundation of a plank, squat, or lunge, with a plethora of variations to help strengthen your entire body," she explains.

Once Fellner dimmed the lights and turned on the energetic techno music, she led us through a series of small movements, targeting one part of the body at a time. Even though, during many of the exercises, we were only moving our bodies an inch or so at a time, that one inch was enough to make me start pouring sweat — I'm talking whole droplets falling onto the floor.

Despite the massive amounts of sweat, though, one of the things I loved most about Solidcore was the focus on loving your body while you work out. During the class, Fellner asked each of us to consider our own goals for the session, whether that was gaining muscle, challenging endurance, or just spending some dedicated time to focus on ourselves. Nobody in the class talked about "burning fat" or anything like that, and the walls of the studio were covered in inspirational words like "happy" and "confident."

As I took in my surroundings at Solidcore, it became more and more obvious why a strong, body-positive, empowering woman like Michelle Obama would be drawn to an experience like this. Seriously Michelle, you've got some pretty good taste when it comes to workout classes.

Even with the encouraging atmosphere, though, I have to admit that I almost threw in the towel during the first 10 minutes of the class. But, somehow, I managed to channel my inner Michelle Obama, and told myself that, rather than completely quitting, I would allow myself to pause if and whenever I really needed a break. I did have to stretch out a tight muscle or allow myself to collapse onto the machine a few times — but I never gave up. And, once we'd finished the last agonizing rep, everyone in the room walked around and gave each other high fives — a Solidcore signature, Fellner tells me.

After class, I admitted to Fellner that I felt a bit discouraged by how often I had to rest throughout the class, and by how much I felt like I couldn't do. But, true to the whole Solidcore vibe, the instructor was incredibly encouraging.

"When the lights go down and the music goes up," she told me, "clients are encouraged to dig deep and find strength that they may have not realized they had before." She added, very kindly, that she was impressed by how much I could do. Even more encouraging, she told me that even she still feels sore after these classes from time to time.

Even if you aren't into pilates, Fellner tells me Solidcore is a great way to support other workout routines, like running or yoga. For many people, she adds, the classes can also be a great source of physical therapy, as she says they can help you get stronger after an injury.

Bottom line: Michelle Obama's favorite workout class did not disappoint. My one recommendation? Don't wear light-colored leggings, because you will sweat your butt off. Literally.

More like this
I Tried Singing While Running Like Miley Cyrus & OMG, My Lungs
By Rachel Varina
25 Instagram Captions For Workout Pics & Being A #Boss In The Studio
By Marisa Casciano
These 40 Clever Vaccine Selfie Instagram Captions Deserve A Shot On Your Feed
By Rachel Chapman
Stay up to date