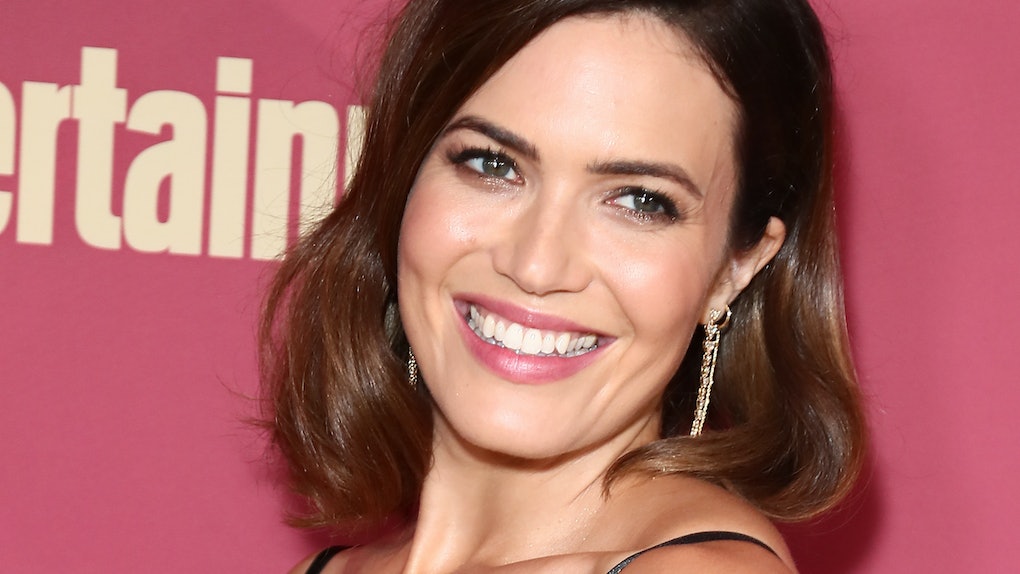 Thanksgiving is the ideal excuse to subject your favorite people to your baking endeavors, regardless of whether they're actually any good. My family can tell you all too well how often I’ve done this, to varying results. This year, though, I’ve decided to keep things classic with a pumpkin pie recipe that's beloved by Mandy Moore. I mean, the woman sang the hit single "Candy" — she's got to know a thing or two about sweet treats.

The recipe (which Moore originally got from blogger Sweet Laurel) is gluten-free, and that's not by coincidence. Moore shared her thoughts on baking for a crowd — especially on Thanksgiving — with Real Simple: "I’m gluten-free, so I’d say [you should] be sure to offer options so people can still enjoy traditional dishes," she said.

Like Moore, I’ve been eating gluten-free for several years, so I’m familiar with the struggle of making desserts that actually taste on par with the “real thing.” But before now, I’ve never actually baked a pumpkin pie, and the challenge of making one that's both traditional and gluten-free felt just daunting enough that I had to try.

So on a rainy Sunday, I warned my roommate that I’d be taking over our tiny apartment kitchen to bake for hours — and promised she could taste-test the results as my first reviewer. Naturally, she was thrilled with this proposal. Here’s how it all went down:

1. Lay Out All The Ingredients & Preheat The Oven

Thankfully, the ingredient list for this recipe is short, so I didn’t have to spend much time hunting down obscure items to bake with. You’ll need:

Lining these items up to take a photo put me in peak food-blogging mode, and I hoped my pic would make Mandy proud.

The crust is deceptively simple to make… so simple, in fact, I was convinced I was missing a step. You just mix up the almond flour and salt, then mix in the coconut oil and egg. Press the mixture into the sides of a pie pan, and boom! You have a homemade pie crust. Mine came out looking distinctly un-glamorous (my technique was a little uneven), but I figured it wouldn’t matter in the end.

Again, this part was blessedly easy. The recipe calls for a hand mixer to blend the ingredients together, but I used a fork and it worked just as well. I blended up the eggs, pumpkin puree, almond milk, maple syrup, cinnamon, pumpkin pie spice, vanilla extract, and salt. This was the point where the kitchen smelled like straight-up cinnamon heaven.

4. Pour Filling Into The Crust

Here's where things started to go wrong for me. According to the recipe, you simply pour the filling into the crust, cover the edges of the crust with foil, and transfer the pie to the oven. In my excitement, I filled the crust all the way up to the brim, proclaiming to my roommate, “It fits perfectly!” I did not, however, consider the fact that I couldn’t possibly transfer the pie to the oven in its overfilled state.

My baking pan was made of aluminum, so when I picked it up by the edges, it folded inward and spilled pumpkin pie filling all over the counter. I called for backup from my roommate, who suggested I unceremoniously scoop the excess filling out of the pan with a mason jar until it reached a level I could manage. Eventually, with four hands on the pie pan (and only one more minor spill), we managed to move the pie to the top shelf of the oven. Unfortunately, the foil pieces kept falling off every time we’d try to pick up the pan, so we gave up on them; the pie would just have to bake without them.

According to the recipe, you should bake the pie for 30 minutes, then remove the foil pieces and bake it for another 15-20 minutes. However, since my foil pieces didn’t make it into the oven, I went ahead and let it bake straight through for 50 minutes, checking on it every so often. When the prescribed time had elapsed, the top looked brown enough, but I was terrified of cutting into it, fearing it still wasn't fully cooked.

Like a true millennial, I Googled “how to know when a pumpkin pie is done” to figure out how to test this, and I discovered you can stick a toothpick or knife into the center to see if it comes out clean. I tried this, and it worked! Since the knife was clean, I let the pie cool for about 10 minutes before I absolutely had to cut in and taste it.

I might have been a bit overeager, because the pie was still hot and the slice crumbled as soon as I tried to cut it. It came out as a mushy (albeit delicious) pile of pumpkin-flavored goodness. For best results, I'd recommend refrigerating the pie before serving, so it actually has time to set and cool.

The pie's less-than-polished looks aside, I was impressed. First, the crust is 100% nutty-savory without a hint of sweetness, which caught me off guard. I wasn’t initially feeling it, but as I continued to eat my first slice, I began to appreciate how it balanced out the sweet filling. And speaking of the filling, it is fabulous, and I could honestly dive straight into it face-first. It tastes quintessentially fall: comforting, rich, and warm.

My roommate (who, notably, is not gluten-free) also said she loved it. I’m considering this a major win, and it’s enough validation that I feel confident to make this recipe again. Sure, the baking process didn’t go exactly as planned, but all’s well that ends well, right? I'd even say this pie is worthy of a Pearson family Thanksgiving on This Is Us, but Mandy Moore might be a better judge of that.