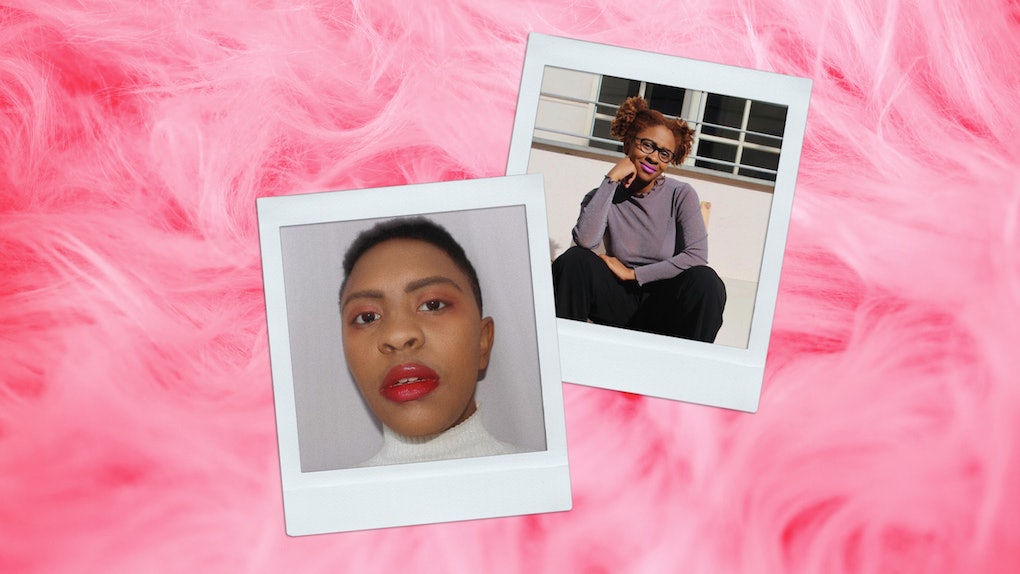 As is the case for many black people with afros — especially in predominantly white institutions — your hair is your calling card. Having an afro made me feel trendy and truly special, because my big, kinky crown stood out in a sea of pin-straight hair and layered waves. But when I transitioned to my natural hair during my sophomore year of college, it felt like the right move politically — an official rejection of the narrow, white beauty standards that had plagued my sense of self all my life. And while transitioning to natural hair marked a transformative milestone on my 20-year-long hair journey, nothing was quite like shaving my head at 21 years old.

When I first broached the topic of shaving my head with family members and friends, most told me I'd miss my hair, or that I was flushing the careful cultivation of my hair down the drain, or that I'd look "like a boy." My immediate thought was, "Who are they to tell me what to do with my body?" I found it awfully presumptuous of them to step in like they knew best about what I should do with my hair. And yet, their warnings were hard to shake. But, at the end of the day, I went forward with shaving my head because I was ready for a radical hair transformation. And after all the self-discovery that a hair switch-up had brought in the past, I felt confident in the liberating power of a dramatic hair change. Shaving my head made me feel free.

Growing up, I've never been a stranger to hair changes. Graduating from elementary school into middle school, I went from little, dark cloud puffs with plastic barrettes to relaxed hair — an African American rite of passage. There was a brief, functional cornrow era (a necessity that came with playing tennis). And then, mid-way through freshman year, I sweet-talked my mom into booking a salon appointment and getting the ends of my hair dyed fire-engine red. My violently bright hair made me feel rebellious and artistic and truly adult.

Everyone who was so pressed about my hair was right: I did look more masculine, if their idea of masculinity was so narrow the only requirement was a bald head. But here is the difference: Instead of that realization filling me with dread, it filled me with warmth.

My concept of self, particularly as a black woman, made itself known through my hair and its changes. Learning about cultural appropriation on Black Twitter and Tumblr motivated me to tackle the issue of Kylie Jenner's dreads as a then-columnist for a campus magazine. Soon after, Amandla Stenberg's "Don't Cash Crop My Corn Rows" video —about the harmful appropriation of braids by non-black people — affirmed my decision to speak out as a journalist critiquing pop culture. Solange Knowles' song "Don't Touch My Hair" (and what it represents for black women) also stoked my growing pride in black culture, the distinct textures and shapes of our hair, and how hair in its natural state sticks it to white beauty standards.

All of my awareness led to what's called "the big chop:" a close-cropped haircut meant to eliminate all damaged hair and jumpstart a person's transition to being natural. (For the uninitiated: The natural hair movement is a movement specific to black and Afrolatinx people. It started in the '60s and '70s with the advent of Civil Rights.) With the help of Shea Moisture's shampoo, conditioner, and curl milk, I soon developed a healthy and nurturing hair routine. From there, my afro was born.

I felt like I finally had a hairstyle that was all my own, and one I felt beautiful and comfortable in. Even so, shaved heads always looked so beautiful and sleek to me, too. Shaving my head still felt like the final frontier. Some of the women and femme-aligned people I have looked up to the most in life — model and activist Adwoa Aboah, Lupita Nygong'o, bisexual pop queen Halsey, and of course, Amber Rose — have rocked the bald-headed look.

I realized I wasn't just redefining what a woman looks like. I was redefining my own womanhood and letting myself finally explore questions I had been so afraid to ask.

So, I decided to just go for it.

The first time I shaved my head, I did it by myself. I wanted to get it done professionally, but I was broke and living in London (where haircuts are expensive) on a student's budget. I went to the nearest convenience store, bought the cheapest clippers I could find, and watched a few YouTube videos. On a night when I knew I'd be home alone, I put my hair into twists and cut them as close to my scalp as I could. I set up a trash bag in my bedroom, turned on PhotoBooth for reference, and shaved my head. Afterward, my roommate touched up the back.

In a matter of a few hours, I was this bald, bold new me.

It's probably clichéd to say shaving my head felt freeing, but it's a two-fold truth. I was physically freed of the crown once heavy on my head. I also was freed of the heteronormative, patriarchal expectations that womanhood should look just one way. Everyone who was so pressed about my hair was right: I did look more masculine, if their idea of masculinity was so narrow that it only required a buzzed head. But here is the difference: Instead of that realization filling me with dread, it filled me with warmth.

I had publicly come out as bisexual in 2016, so my queerness (as far as sexuality goes) was already on the table when I shaved my head. As far as my gender expression went, it wasn't. Or... was it?

Shaving my head allowed me an opportunity to challenge the way I had previously expressed myself. It had always been easy for me to slide into my masculine energy with a sweater, blazer, button-down, slacks, and loafers. Janelle Monáe gave me the strength to discover that. But shaving my head reminded me there's a lot about my face that is androgynous, especially when I have a hat on. I relished that. I enjoyed not having to shoulder anyone's expectations of what I should look like, or how I should dress, or who I should be.

It was strange and liberating to wake up each day and see this sharper face, accentuated by the lack of soft, feminine hair. I realized I wasn't just redefining what a woman looks like — I was redefining my own womanhood and letting myself finally explore questions I had been so afraid to ask: What does womanhood mean to me? What could womanhood mean to me? If there's a shift in that definition, what would that look like?

In a world where hair is so politicized, especially for black women, shaving my head has given me that much more confidence as I move throughout the world. It's not simply about removing myself from the relaxed hair vs. natural hair binary, or any category where society gets to judge my black womanhood based on my hair. By shaving my head, I rejected long-held ideas about what any woman should look like. I also rejected everyone's ideas and options about what I should look like, and I'm ultra comfortable with that.

It's been a year and four months since I first shaved my head. Since then, I've been reminded that, yes, hair is and always will be political. But what that means for me will evolve as frequently as I do: from childish puffs to relaxed 'dos, from cornrows to punk rock dip-dyes, and life as an unapologetic baldie.

Just as my afro was my calling card, my shaved head is a beacon. It signals, "I'm marching to my own beat." Listen up.