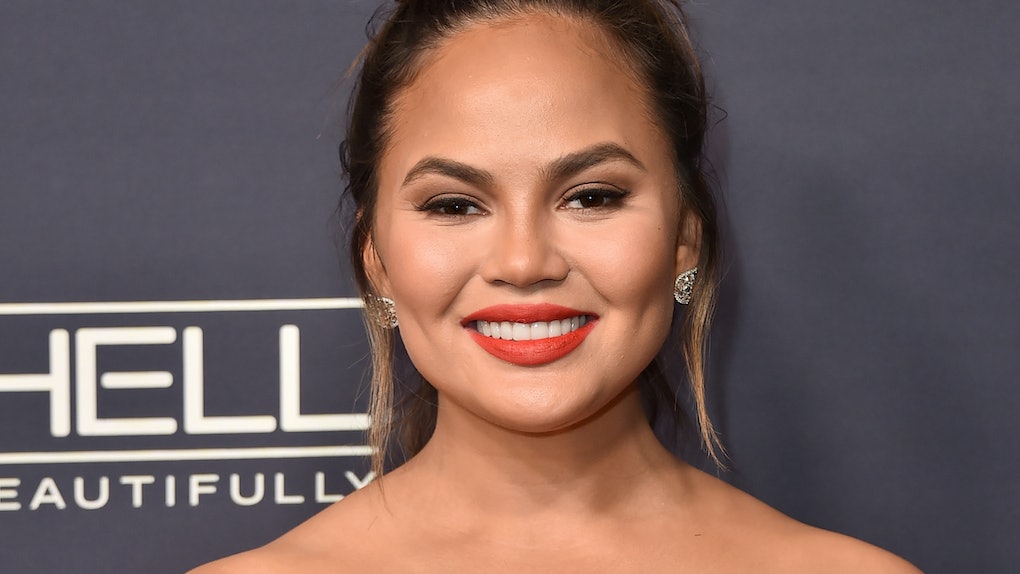 I Lived Like Chrissy Teigen For A Week & It Affected My Clothes, Confidence, & Relationship

At this point, it’s safe to say that Chrissy Teigen is living da life. Fresh off the heels of announcing her second pregnancy, the Twitter queen's glow knows no bounds, and it got me wondering what would happen if I lived like Chrissy Teigen for a week. While I certainly can't snap my fingers and impregnate myself (and I really don't want to), there are so many other avenues to channel Teigen's vibes, from making recipes from her cookbook to wearing the clothes she designed.

Think about it: Between writing her second cookbook (Cravings 2), playing with Luna (aka the cutest baby ever) and designing a clothing line for Revolve, Teigen hustles around the clock and has fun every step of the way. I'd be out of my mind not to want in on that magic.

I decided to study Teigen's habits like a textbook, and made a pact with myself to imitate her lifestyle (to the best of my abilities) for seven straight days. I vowed to treat Cravings as a meal plan, and the lovely people of Revolve clothing agreed to lend me several samples of Teigen’s coveted clothing line. All that was left to do: Listen to John Legend songs on repeat, commit to working out every day, and call out our Idiot-In-Chief on Twitter (which was honestly the easiest part because OH MY GOD THE NERVES).

This should be a cake walk.

On day one, my alarm went off at 6 a.m. and I headed to the gym. Typically, I try to get a workout in after work, but this day was full of back-to-back work events and grad school, so with a bit of drool dripping out of my mouth, I slouched my way over to the treadmill. When Teigen was pregnant with Luna, she told SELF magazine that she worked out every day, so really I had no valid excuse to not do the same.

Teigen's workouts consist mostly of dancing, boxing, and jump roping, while I prefer yoga, running, and Netflix marathons. I attempted to adapt my workout schedule to align more with hers, and it wasn’t as easy as it seems. Anybody who has done the jump rope with conviction knows that it’s no easy feat — we’re no longer in elementary school, guys. This rope is hard. After a boxing class on day three, I felt as if I’d punched the patriarchy and (and entire White House administration out of office). It was that exhausting.

Fitting a daily workout into an already-packed schedule isn't for the faint of heart. But on the days I dragged myself to the gym at 6 a.m., I noticed that I was much more energized and efficient at the office. Is this how Teigen accomplishes so much? The hardest part was actually getting out of bed, so for those determined to follow a daily routine, I suggest putting an alarm on the other side of your bedroom so that you're forced to get up. And keep your cute AF workout clothes next to the phone.

What sets Teigen apart from the herd is the fact that she really eats. She doesn't just pose with a slice of pizza (@youdidnoteathat style); she actually consumes real food and carbohydrates. If you're going to follow the lifestyle of any model, Teigen's is clearly the tastiest. Just take at a peek at the opening of her book, Cravings.

If you’re expecting a model to write a cookbook full of diet recipes for you to perfect your bikini bod, I think you’ll be a little surprised here. Look, I don’t want to be one of those annoying ‘I can eat anything I want anytime’ chicks. It’s just that I wanted to be honest in this book about the kinds of food I love, the kinds of food I crave.

Eating like the co-host of Lip Sync Battle turned out to be surprisingly dicey for me. I’m a vegetarian, so I couldn’t eat many of her recipes, although they do look delicious (I’m looking at you, steak bits with melty blue cheese butter).

And as most New Yorkers will tell you, we don't tend to use our kitchens for anything other than extra storage. I don't own quality pans, and the only spice I have is cinnamon. As to avoid culinary catastrophes, I opted to stick to Cravings' easiest, most straight-forward recipes.

Quick, tasty, and not requiring actual cooking, Teigen's toasts became my savior. I tweaked the fig/ricotta honey/salami one to fit my vegetarian diet, and overall, ate one too many of the cinnamon toast/dark chocolate variety. Teigen's cheesy guacamole was a favorite as well, because duh. Who doesn't love cheese and guac? And why had I never thought of this combo before???

As many New Yorkers will also tell you, we spend most of our time away from our apartments. This is especially true if you have a full-time job and go to grad-school at night like me, so, unfortunately, most of my meals didn't come straight out of Cravings, but from a restaurant instead. I decided to maintain a Teigen-worthy diet by using her recipes as inspiration for my takeout orders. You know, same, same — but different.

Throughout the week, I concocted Teigen's crispy mac and cheese, Brussels sprout salad, sesame noodles, and tomato soup. They're all super-filling in both the stomach and soul senses, but since I was exercising so much, I ended up enjoying them much more.

Teigen consistently makes headlines for calling out Donald Trump on Twitter, and quite honorably got blocked by him back in July. I'd be lying if I said that this activity is something new for me, since I've definitely sent some hurt, angry tweets his way. But in lieu of the self-titled Teigen week, I amped it up a bit, poking at the likes of Fox News and Sarah Sanders and anyone else who tried to twist the Paul Manafort-Russia connections into a Clinton story.

At this point, I was following Teigen's routine in terms of exercise, diet, and disdain for a certain Cheeto-in-Chief. But now for the fun part, clothes! Teigen's fashion line for Revolve is moderately affordable, with pieces ranging from $78 to $328. One of my favorite pieces from the Chrissy Teigen x Revolve collection, the nude L.A.X. Bodysuit, can be dressed up and down depending on occasion. When I first tried it on, I noticed right away that my boobs looked great (just like Teigen's!) The bodysuit boasts built-in padding, so you don't have to wear a bra, and looks very chic.

Since Teigen's a big fan of sky-high leg slits, and tends to wear backless dresses on date nights, I chose to wear the Matcha Dress for a date night with my personal John Legend, my boyfriend. The dress has a button on the slit, so you can actually adjust how much leg you want to show. Obviously, I decided to unbutton and go full-on Teigen. My boyfriend's response? "Wow! Can you keep it? Please tell me you can keep it." He loved it!

And I don't blame him, because I looked fly in the dress. It made me feel very sexy, and I derive a certain amount of confidence from that. Even after our date was over, my boyfriend kept mentioning it the dress, so if you really want to impress someone, I'd go for this slit star.

Teigen and Legend are widely known to be #couplegoals for their hilarious and ever-supportive relationship, and I think we can all agree that it's a dream come true to watch it unfold. My boyfriend and I were best friends for four years before getting together, and a few months in, I tried to pull a John Legend breakup on him. I was super stressed with grad school and work, and figured it would just be easier to be single. He responded in the same way that Teigen did when Legend tried to break up with her, and was just like, naw. He Teigen'ed me! And now I can't stop humming "All of Me" on repeat.

Most notably, one significant occurrence during Teigen-week wasn't something that I cooked, sweated through, or wore, but rather something much more precious and personal. Perhaps it was the excessive amount of John Legend romantic ballads I was listening to on loop, or maybe it was the cocktail of drinks I had imbibed, but I told my boyfriend that I loved him for the first time. (Editor's note: Awwwww.)

During Teigen-week, I learned living la vida Chrissy is not only doable, it's preferred, and it's now become my lifestyle. I feel healthy and energized because I'm working out more, and I don't feel guilty satisfying my culinary cravings because of said workouts. I listen to bomb music on repeat, wear sexy, sophisticated clothes, and I finally had the guts to take my relationship to the next level.

What jumped out at me most during this experiment seems obvious in retrospect, but it wasn't before I tried it. Teigen is true #goals because she does what she really, genuinely loves. She doesn't put up with BS and she sticks to her guns, unapologetically declaring who she is and how she feels. Her inventive ways to find balance in her life are relatable, and they work. It seems so simple, but after living with a similar and genuine mindset, it became blatantly clear. Life is best lived embracing every moment, even when they're uncomfortable and hard. Like early morning workouts.