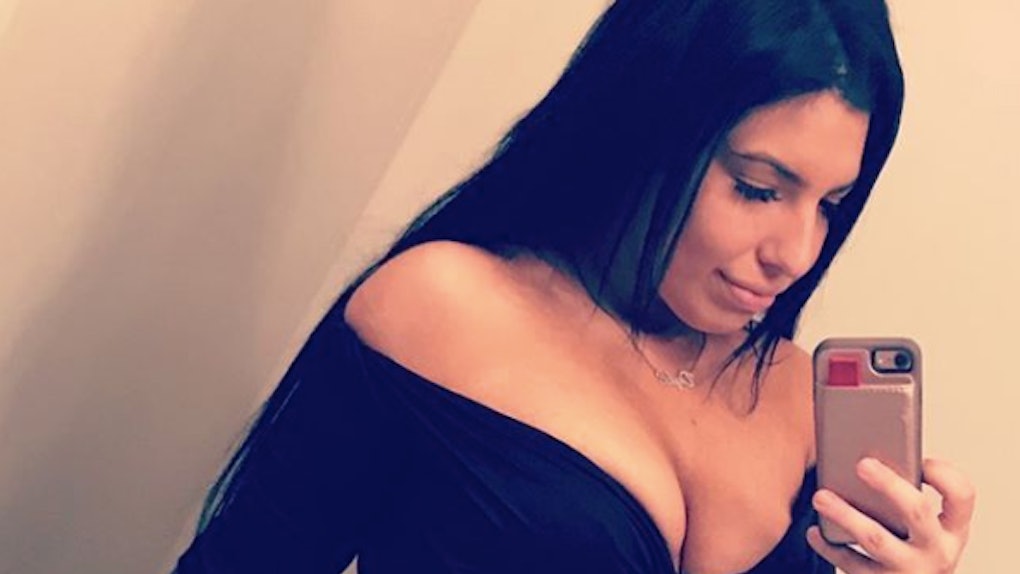 I Kissed My Roommate During College Orientation & It Was Surreal

I threw up on the way to college orientation. Like, legit made my dad pull over on a highway while I gagged my guts out in Juicy Couture sweatpants and cried hysterically. I begged my parents to take me home, and said that they were totally right that I should be commuting instead of dorming. See, I was the fun party girl with my squad of lifelong friends, but throw me into unfamiliar territory, and I turn into that weird anime kid no one talks to. I was sure I wouldn't make any friends... let alone kiss my roommate.

"We paid, kid, you got no choice," my dad said, patting my back.

Once I shakily exited the car and tearfully said goodbye to my parents, I was escorted by an overly peppy upperclassman to a long table full of new students. We played torturous ice-breaker games. As everyone shared their two truths and a lie, I wished with everything I had that I was at home with my BFF eating pizza in front of the TV. I was so anxious that I almost didn’t notice that I was sitting next to a tan AF girl dressed in Ed Hardy sweatpants. She had bleached platinum hair and her extension tracks were showing. But she was cool enough to make it work.

Then it was time to find our dorms. Imagine my anxiety spiral when I realized the blonde Ed Hardy girl was my roommate. She’s way cooler than me, I thought. (Yes, Ed Hardy was cool at that time. I’m getting old.) We made our beds in awkward silence, then sat on them and stared at our phones.

“Are you from here?” she asked.

We didn't grow up that far apart. Silence again.

We went to the cafeteria for dinner together, where I was way too nervous to eat in front of her. I realized I had forgotten to ask her name and panicked, but I was too shy to ask. I was thankful when I realized she was wearing a gold nameplate necklace: Victoria.

“Eat mac and cheese,” she instructed, waving her hand toward a bowl. “We’re going to be drinking tonight.” She told me she knew all the good parties around here as she shoveled bright orange noodles into her mouth and furiously pounded her acrylic nails onto her flip phone.

“Gino is going to pick us up tonight,” she said, as if I should know exactly who she was talking about.

I pretended like I knew exactly who Gino was and like I wasn't panicking. An orientation leader had given us specific instructions not to leave campus, or else we'd be "sent home." In hindsight, that rule seems low-key fake to me and was probably intended to scare us out of drinking. But at the time, I took it seriously.

Gino and a gaggle of other Italian guys picked us up in a Hummer. They were from Queens. Although they all seemed cooler than me, I couldn’t help but feel at home. My high school years were all spent driving around, blasting techno with friends with names like Giovanna, Maria, Pauly, and Angelo. I liked to drink and break my parents' rules in high school, but I had a feeling that Victoria and her crew were even more intense than that.

We drove for what felt like hours to this bar on the water filled with old biker guys. No one checked our IDs. I busied myself with petting a Collie on the deck while the boys and Victoria went to the bar.

They returned with Fireball shots (vom). As they clinked glasses, I stared at my Blackberry and begged my best friend to come pick me up. I wanted to be there, but at the same time, I was terrified. Victoria had this intense, IDGAF energy, like she could get away with anything. I pictured what could happen later that night: We'd run away from the cops together; she'd seamlessly hop a fence; I'd trip over my own feet and get arrested. I've learned that I'm usually attracted to girls I feel like I'd get into trouble with. I like to feel like the goody two-shoes because usually — with friends — I'm the bad influence.

LMFAO's "Party Rock Anthem" blared in the background as I got up to use the bathroom. Victoria followed me. As drunk girls are wont to do, we shared a stall. She sat on my lap as I peed. A split-second later, we were making out. Victoria pulled out her phone and took a picture; I hastily pushed her phone up to disguise the fact that my pants were around my ankles. She uploaded the blurry picture to her "mobile uploads" album on Facebook.

We kept kissing at a table by ourselves. I knew I was gay, and I wondered if she was bisexual. True, I'd been making out with my girlfriends since I was, like, 12, but making out with Victoria felt different somehow. I couldn't pin down how I felt about her.

Victoria asked Gino to take us back to our dorm. We compromised and he drove us to a frat party that was close to the college. While everyone else piled into a house covered in toilet paper and blasting EDM, we sprinted away. We kissed on the street. We drunkenly fell into a thorny bush and kept kissing. The sky seemed to spin, but instead of making me dizzy, I felt electric.

It was the kind of kissing that I had only dreamed about. Sure, I had a girlfriend in high school, and I even thought I was in love with her, but I had never kissed with such hunger, with such reckless abandon. We didn't even consider that we were two wasted AF 18-year-old girls in a notoriously bad neighborhood.

When we finally stumbled back to our dorm — after getting hopelessly lost — the effects of those Fireball shots had worn off a bit. I was sure we'd crawl into our respective beds and write the whole thing off as an experiment. But somehow, our lips found each other again. We kissed as we walked to the shower. As we entered, still kissing, I reached out my hand to turn the bathroom light on. She reached to turn it back off.

We didn't even bother to take our clothes off before piling into the shower stall. We made out in the dark as the faint water pressure dripped onto our hair extensions. I felt hypnotized: I didn't care that she tasted like Four Loko and Doritos, or that the shower curtain was covered in mold, or that my spray tan was leaking all over my favorite Hollister jeans.

I didn't care that she tasted like Four Loko and Doritos.

We kissed for like a half hour, which is actually a super long time if you think about it. Then Victoria pulled away, gazed straight into my eyes as if she was looking into my soul, and turned to puke all over my feet. Then she puked some more.

I snapped into mom mode — the mode I’m used to being in when I hang out with prettier-than-me-party-girls. I held back her hair, stroked her arm, and bought a ginger ale from the rickety vending machine in the rec room. After she stopped throwing up, she grabbed my face to kiss me again. I wish I could say I was like, "No, you just threw up, this is a bad idea." But instead, I was like, "Kk."

We both slid between the floral sheets on her twin XL bed and kissed until we fell asleep. I woke up first and anxiously sprinted to the shower. I practically had a heart attack wondering if I was the weird predator lesbian, even though she had kissed me. I spiraled that she was going to feel weird sleeping in the same room again. When I returned, dissociating with worry, she was awake.

“Wanna get Starbucks before that weird safe sex seminar we have to go to later?” she asked casually.

I couldn’t tell if she didn’t remember last night or if she was completely unaffected by it. After all, was kissing really such a big deal? I mean, that's what girls do in college, right?

At Starbucks, over frappuccinos, we debated which tanning salons we wanted to sign up for and she explained that she and Gino used to have sex. The news didn't hurt. Our conversation helped me realize that what happened between us was probably casual. I felt both grateful and confused. The next two days were a rather uneventful series of seminars, group activities, and binge-drinking. Each night, we slept in our own beds.

We never talked about that night. I guess there was nothing to talk about.