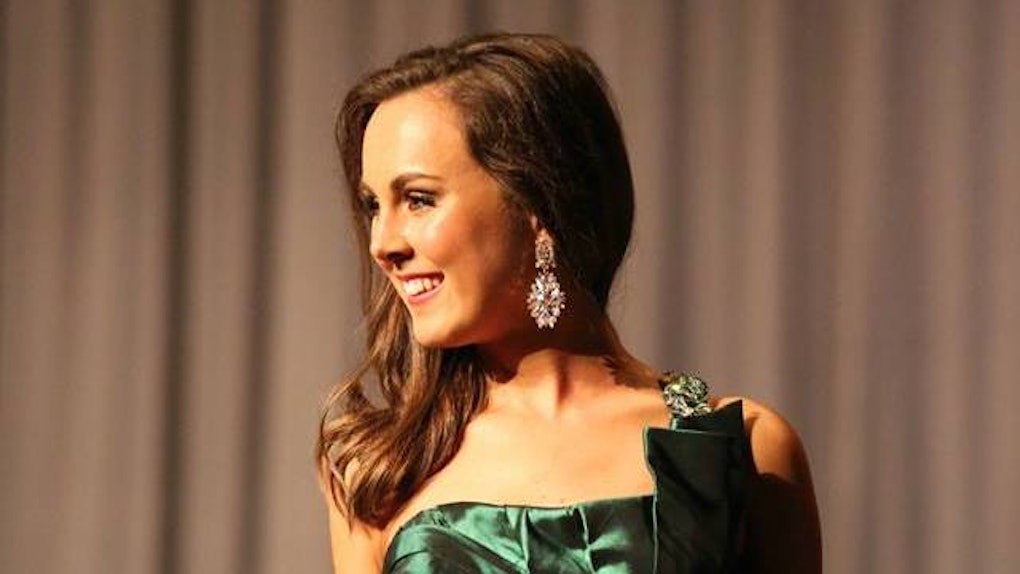 I Competed In Pageants That Gave Me Lasting Body Image Issues, & My Feelings About Them Are Complicated

Standing under the bright stage lights, I feel the audience’s eyes on me. It’s an unsettling contrast — rows of fully clothed spectators watch me walk onstage in a red bikini as I compete in a local Miss America pageant in Nashville, Tennessee. I try to remember every piece of choreography I’ve been rehearsing — knee slightly forward, angled just right to pull my core muscles taut. A sharp pivot while I keep my eyes on the judges, one single twirl, and a quick wink before I finish my routine. When I competed in pageants throughout high school and college, my life was full of moments like this — balancing delicately in six-inch heels while I smiled at the audience with a seemingly effortless sense of grace.

I “caught the bug” for pageantry at age 17, when I entered and won my Tennessee high school’s annual pageant. My confidence soared. I loved being able to sing onstage, to wear gowns that made me feel beautiful, and to sell my public speaking skills in an interview room. It seemed only natural that I would try competing in the Miss America program in college, which gave me a chance to earn scholarship money if I placed as a winner or runner-up. I took my training seriously, attending biweekly sessions with my coach who would teach me how to pivot in heels, hit all my talking points, and convey an easy sense of elegance.

I loved the process of prepping for competition, but it was also stressful. Between the vocal lessons, community service engagements, intense workouts, and monitoring of my diet, it became hard for me to fully commit. I only competed in two local Miss America pageants as a college student (and ultimately did not win scholarship money from the program), but I spent months preparing for them, and became uncomfortably familiar with the culture and pressure to be “perfect” — talented, well-spoken, politically engaged, charitable, and a picture of physical health and fitness.

Despite the stress, it was a pastime that truly energized me, even as I stood in front of scrutinizing eyes wearing next to nothing. The spectacle of it all — photoshoots, elegant dresses, bold lipstick, and bright swimsuits — made me feel feminine and beautiful. I didn’t feel objectified on stage; in contrast, I felt self-assured, alluring, and graceful. I learned the discipline of chasing a goal and the pride of showing off how hard I had worked to accomplish it.

The downside is that it also taught me to strive for the “ideal” in all things, and not in a way that was always healthy. The night before a show, I used to cover my stomach with lotion and wrap it in plastic wrap while I slept — a trick I learned from a friend to help sweat off my water weight. I don’t do that anymore, but to this day, my inner critic won’t let me off the hook when I want to eat junk food or take a rest day. And even though I haven’t competed in four years, I still practice a strict fitness regimen and check my stomach in the mirror every morning to see how my body is changing. It’s become so ingrained in my psyche that I don’t know how to let myself off the hook and breathe.

In the present era of cultural reckoning about body shaming, I have felt deeply conflicted about this part of my past. I’m still grateful for my experience in pageantry, but I’ve often wondered about its value. As Miss America fights to stay relevant in the modern age, I’ve had a chance to reflect on how the organization has impacted my life and the lives of other women who competed.

Miss America is one of our nation’s oldest and most controversial annual traditions, founded in 1921 as a bathing suit competition in Atlantic City, New Jersey. After almost 100 years, the pageant is now trying to shake its beauty-centric past. In June 2018, former Miss America Chairwoman Gretchen Carlson announced the non-profit would “no longer judge our candidates on outward physical appearance.” The swimsuit competition was scrapped entirely, and contestants can now wear whatever they choose during the Evening Wear competition (instead of being required to wear a formal gown). This was a huge change that seemed to signal a more progressive future for the organization — one less focused on appearance, and more focused on public service and talent.

But for some former contestants, it was a disappointing departure from tradition. “I love the tradition of swimsuit. To walk across the stage in a swimsuit for me was really empowering,” says Grace Burgess, Miss Tennessee 2016. Burgess tells Elite Daily she has always considered herself a feminist, but she’s also proud of her time in pageants. “I made the decision to compete, and I loved it,” she tells me. “It's an opportunity to show your confidence and to show that you love yourself, and maybe you want to stand onstage in a swimsuit and high heels.” She says showing off her body made her proud of how hard she’d worked toward becoming what she considered her best self.

On the other hand, Morgan Moore, a former Miss Tennessee contestant who competed in the Miss America Organization from 2009 to 2013, still struggles with negative self-perception after her years in pageantry. She remembers herself in peak competition mode, when she cut carbs and worked out twice a day, and still today wishes that she could look like she used to. She tells Elite Daily that after the state pageant, she would look back and think to herself, “I would have been so much better, I would have placed higher, if I had lost just five more pounds.” And yet she says she feels like she was practically “a walking skeleton,” always trying to be skinny because she associated fitness with personal growth.

While the Miss America Organization has never explicitly implemented a weight requirement, historically, there has been an unspoken pressure to maintain a low body fat percentage. Swimsuit contestants on the national stage have washboard abs and visible muscles all over their bodies. And while this physique might come naturally for some, it may trigger others into unhealthy patterns of dieting and extreme exercise. A 2003 study published in the U.S. National Library of Medicine surveyed 131 former pageant contestants (in multiple systems, not just Miss America), and found that 48.5% of respondents reported wanting to be thinner. This study is several years old and doesn't necessarily reflect the most up-to-date attitudes of pageant contestants toward their bodies, but it provides an enlightening look into how some women may feel today.

PyschGuides.com, a subsidiary of the American Addiction Centers, tracked the BMIs of Miss America winners from 1921 to 2015 and found that while the BMI of the average American woman has increased from 16 to 28, the BMI of Miss America winners has decreased from 21 to 17 — more than 10 points below the national average. It’s important to note that while BMI is a measure of body mass, it’s not necessarily indicative of overall health. People can have dangerous relationships with food and exercise regardless of their weight or BMI.

In an exclusive statement, the Miss America Organization tells Elite Daily that it has “long advocated for healthy lifestyles for its participants.” The removal of the swimsuit competition, the organization claims, is part of a broader restructuring to make the competition accessible to more women. “As an organization focused on service, advocacy, and scholarship, we do not believe that what someone looks like in a bikini should be a precursor to earning a scholarship — our primary mission,” the organization states. “We want the scholarships and opportunities provided by our program to be available to as many women as possible, and we’re receiving positive feedback, coupled with [increased] participation, from many who felt excluded before.” The organization says they were unable to quantify the exact participation numbers because of ongoing competitions around the country.

In my heart, I believe this organization supports women by providing an outlet for them to speak about charitable issues they care about. The Miss America Organization has produced some of the most ambitious and brilliant leaders I've ever met, but I also believe each woman responds differently to the pressure that often comes with competing in pageants. For some, competing in a swimsuit is empowering; for others, it damages their self-esteem in a way that could take years to heal from.

Body image dissatisfaction and perfectionism are both risk factors for eating disorders, according to the National Eating Disorders Association. And at any given time, between 0.3% and 0.4% of young women in the U.S. will suffer from anorexia — it has the highest fatality rate (around 10%) of any mental illness. The extreme pressure placed on women in pageantry cannot be ignored, even now that the swimsuit competition has been removed from the Miss America Organization.

I worry that Miss America will fall as a casualty of the body positivity movement, because pageantry as a whole was created to put women on display. And yet at the same time, I am grateful to have been a part of it. Pageantry can grow your voice, build your confidence, and teach you to take on the world. But it can also make you incredibly self-critical if you get caught up in sky-high expectations at the expense of your own mental, emotional, and physical health.

An organization filled with such powerful women has to be doing something right, but right now, it’s not doing enough. I’m happy to see Miss America advocate for health and fitness, but this cannot involve an aesthetic component — after decades of judging women by their looks, it’s high time to put this practice in the past. The removal of the swimsuit competition is a really great start.

If pageantry is a vessel for some women to feel strong and beautiful, it deserves a more open-minded attitude from its critics. But Miss America needs to come out from its sheen of glitter and show us that women shouldn’t have to look and behave like some packaged, curated “ideal” in order to make a difference in the world. I want to see women fall in love with pageantry the way I did, but without feeling the lasting pain it has caused me.

Miss America, I want to believe in you. Please show me you’re worth fighting for.