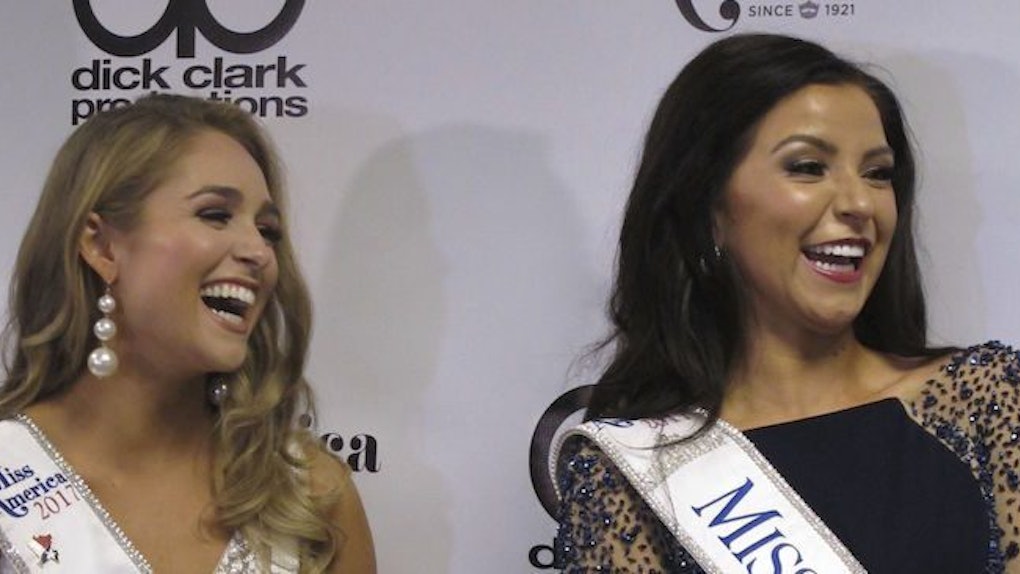 Video Of Miss Texas' Charlottesville & Trump Answer Is Everything

She might not have taken home the coveted tiara, but Miss Texas's answer about Charlottesville and President Donald Trump was nothing shy of praise-worthy. Her peer, Cara Mund (Miss North Dakota), took home the crown and title of Miss America during the pageant on Sunday, Sept. 10 in Atlantic City, New Jersey. But Margana Wood's statement is generating (deservedly so) all the buzz.

Jess Cagle, editorial director for People and Entertainment Weekly, asked the Texas representative what many saw as one of the toughest, most incisive questions of the night. Cagle asked Wood,

Last month a demonstration of neo-Nazis, white supremacists, and the KKK in Charlottesville, Virginia turned violent and a counter-protestor was killed. The president said there was shared blame with, quote, 'very fine people on both sides.' Were there? Tell me yes or no, and explain.

Wood didn't even flinch. Using just 15 of her 20 allotted seconds, she shot back,

I think that the white supremacist issue, it was very obvious, that it was a terrorist attack. And I think that President Donald Trump should've made a statement earlier addressing the fact, and in making sure all Americans feel safe in this country. That is the number one issue right now.

The 22-year-old Wood is a graduate of University of Texas at Austin where she studied Corporate Communications. Her platform for the Miss America pageant was focused on respect, inclusion, and combatting bullying. But her belief in inclusivity apparently didn't translate to excusing the actions of the president or of white supremacists. And people were there for it.

Her criticism of the president and of the Charlottesville protestors was lauded by civil rights leaders and activists as well.

Some users contrasted the succinct, no-BS answer by Miss Texas with the president's own response.

Trump's waffling on Charlottesville, after all, didn't show the, um, vertebral integrity that you'd hope for from a president.

Many users seemed surprised that a Texan would speak so critically against the president.

Though there are a fair number of Democrats in the Lone Star State, the county with the highest percentage voting for Trump in the country was in Texas, according to ABC. But the stereotype of conservative Texans is, like most stereotypes, not the whole story. Following the Charlottesville rally, protests and rallies both for and against white supremacy were planned throughout the state.

Her answer might've bothered some people, but it earned her cred with others.

Surprisingly, the president has yet to retaliate with a tweet, say, blaming her remarks on menstruation or cosmetic surgery. Only time will tell if he'll allow criticism of himself by a strong-willed woman stand without rebuttal. In the meantime, Wood has earned herself some due praise.

While she spoke, Cagle nodded along. (Didn't we all?) It was, after all, refreshing to hear a well-spoken woman who seemed to care about more than scoring brownie points, who didn't back down even on a controversial topic that could lose her fans. In 15 seconds, it would've been easy to flounder and sidestep a substantive answer by filling the time with neutral language. But Wood wasted no time on milquetoast phrases. Her straightforward condemnation of the Charlottesville response, and calling terrorism by its name, was what so many people needed to see and hear.

And in an Instagram post following the evening, Cagle made clear what he thought of Wood's answer.

Congratulations are in order for all the contestants, and for the new crowned winner. But I'm especially cheering for Miss Texas. Here's hoping future Miss America pageants will continue to push forward important conversations like this one.