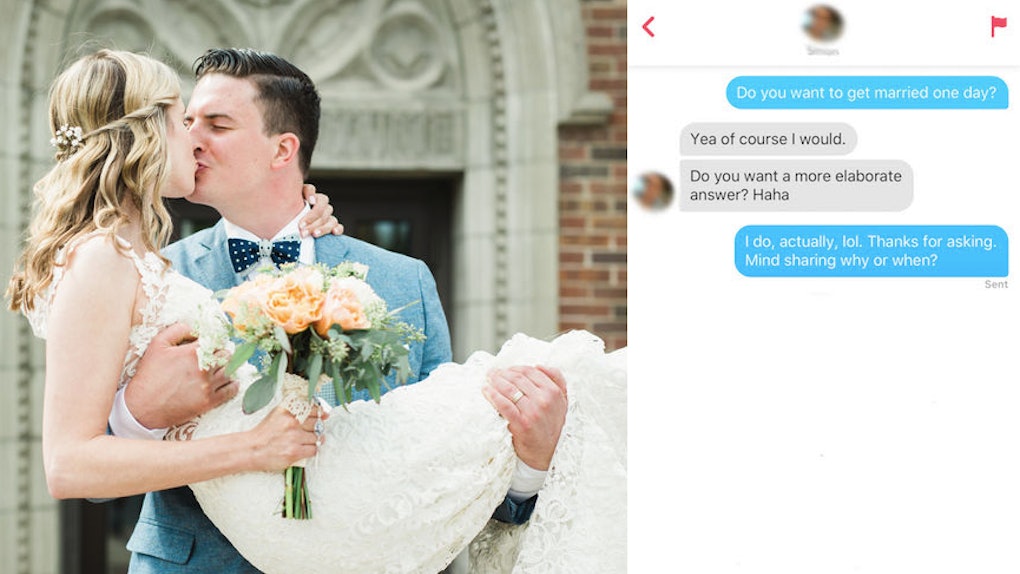 I have mixed feelings about marriage. Most days, I think I'm not cut out for it, but for silly reasons. "I like having my own closet space and bathroom sink," I rationalize, knowing fully well these are minor fixes on any HGTV home improvement show. But, other days, I feel more strongly about my disinterest. I'm uncomfortable with the grandeur of most wedding traditions. Plus, the thought of signing a contract that legally binds me to another human being "for better or for worse" is my personal hell. Obviously, I asked my Tinder matches if they wanted to get married because LOL, why not?

"Hey, I probably, absolutely, maybe never want to do this thing we're supposed to do in roughly two years if all goes well but, um, how about you?!"

Totes normal, I know. Anyway, I figured they must have given some thought to this before signing up for a dating app. My personal grievances aside, I get that a lot of people view marriage as their long-term goal when dating. The rationale, I assume, is, well, why date if not to get married? This might be where my real issues with marriage lie. I get into relationships to share inside jokes with someone, to have a designated travel buddy, and, ultimately, to enjoy each other's company. And I don't think we need to be married to do any of those things.

In the past though, friends of mine have suggested I get married for very different reasons, like these.

You get why I have doubts about the sanctity of marriage, then.

Unfortunately (or fortunately?) for me, I don't have a lot of people to back me up on this. All of my Tinder matches revealed that they would want to get married eventually. A few of them even say they're ready right now. Um, guys, I'm going to need a minute.

Simon knows what he wants and, luckily, what I want. After declaring that yes, of course, he wants to get married one day, he offered to explain his reasons.

He takes commitment seriously, which is why he wants to get married when he's financially able to provide for his partner and their family.

And speaking of interviews, he did a little investigative journalism of his own. Although my Tinder profile lists me only as "Syd," he admitted that a quick Google search led him right to my articles. Let's just hope he doesn't read all about my aversion to wedding bells and run away. Sorry, Simon!

Matthew had a similar take on marriage: He's up for it but not right now. Unlike Simon who's working on himself to be ready for the big day, Matthew is just waiting for the right person.

His future wife should be ready to jet across the world with him. Wait, I could be into that...

Damian, too, says he's ready to pop the question after years of casual dating. All he needs now is someone to ask. Wow, and I used to think guys had trouble with commitment.

Jeff suspected I was about to ask him something weird since my bio says, "Can I ask you a question for an article?" I think because I was honest with him, he felt that he could be honest with me.

Jeff's take on marriage is, like mine, a little jaded. His reason is different, though. He thinks it's better to wait to get married because he believes couples who marry young usually get divorced. While it's true that young newlyweds are more likely to get divorced than couples who wait until their mid-20s or later to tie the knot, it's possible to have a happy marriage at any age. Anyway, did you know that spring is the season for splitting up? Divorce rates spike in March. Talk about spring cleaning.

Of the five guys I spoke to, Casey was the only one who seemed to share my views on marriage. He's not exactly opposed to it but it's not essential to his romantic happiness or fulfillment, either.

For him, a promise between two people (and the exchanging of rings, if they're into that) is more than enough to seal the deal, and I couldn't agree more.