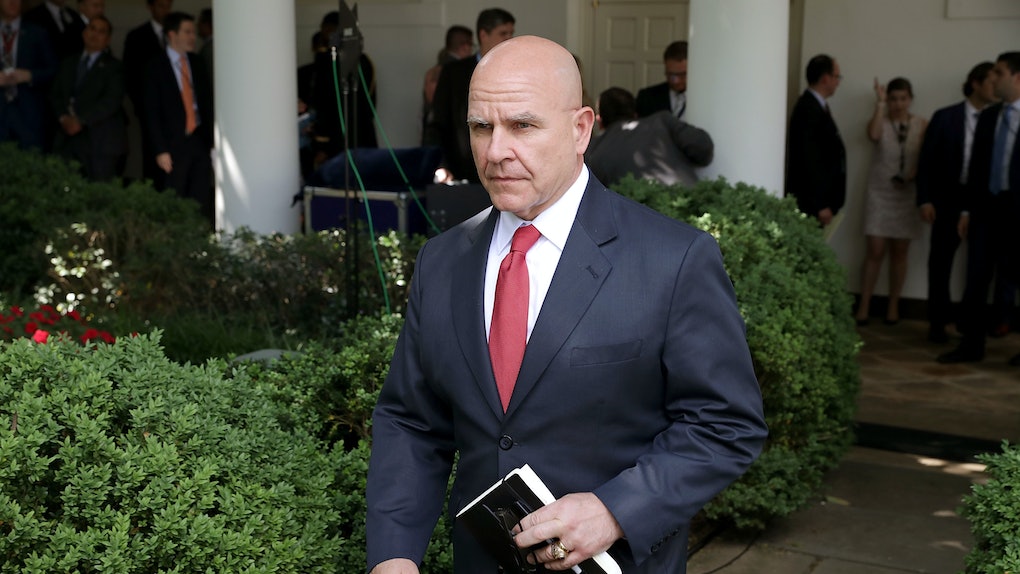 H.R. McMaster Might Lose His Job At The White House & It Could Happen Soon

The changes keep on happening. In a matter of weeks, President Donald Trump's staff has seen a series of resignation announcements for major players in the administration, including Secretary of State Rex Tillerson, chief economic advisor Gary Cohn, and communications director Hope Hicks. Multiples news accounts indicate that the departures won't stop any time soon, either, with The Washington Post reporting that the president's national security advisor, H.R. McMaster, might lose his job at the White House soon.

According to The Post, which cited five unnamed sources in its report, the president has decided he wants to get rid of McMaster but has not pulled the trigger yet because he hasn't decided on a replacement.

The New York Times reported similar details, that the president has "concluded" that he will fire McMaster. The Times also added that Trump's chief of staff, John Kelly, is a major player pushing for McMaster's firing, and that John Bolton has been discussed as a likely replacement. Bolton is a Fox News contributor and former U.S. ambassador to the United Nations under President George W. Bush.

The publishing of the reports from The Times and The Post triggered a familiar series of events. The series goes like this: Reports get published, the reporters behind the stories add more details on Twitter while warning that Trump could change his mind to counter the stories, and then a Trump administration member publicly denies the report.

On Thursday night, March 15, New York Times White House correspondent Maggie Haberman tweeted, "Trump is done with McMaster and has been for some time. McMaster is also essentially saying 'screw it' and not pushing to stay. But four admin sources say this anti-McMaster push is led much more by Kelly than Trump right now."

Haberman later added, "McMaster was said by many ppl in the White House to be gone as soon as tomorrow — again, timing accelerated by Kelly. But, as Trump often does, a media story can push him away from where he was leaning in the first place and all around him end up tarred."

The same night, White House Press Secretary Sarah Huckabee Sanders contradicted the details of The Washington Post's report. "Just spoke to @POTUS and Gen. H.R. McMaster — contrary to reports they have a good working relationship and there are no changes at the NSC," Sanders tweeted.

A familiar pattern of events unfolded during the tail end of 2017, when media reports foreshadowed the departure of Rex Tillerson. After outlets like The New York Times and Axios reported that the president was looking to oust Tillerson and replace him with CIA Director Mike Pompeo, the president publicly denied the stories.

On December 1, Trump tweeted, "The media has been speculating that I fired Rex Tillerson or that he would be leaving soon — FAKE NEWS! He’s not leaving and while we disagree on certain subjects, (I call the final shots) we work well together and America is highly respected again!"

Months later, Trump would tweet the opposite. "Mike Pompeo, Director of the CIA, will become our new Secretary of State. He will do a fantastic job! Thank you to Rex Tillerson for his service! Gina Haspel will become the new Director of the CIA, and the first woman so chosen. Congratulations to all!" the president said in a post on Tuesday morning, March 13.

In addition to McMaster's potential departure, both The Washington Post, The New York Times (along with the president himself) have indicated that more changes could be coming within the White House staff.

In other words, regardless of what denials are coming from the White House, there's still reason to expect the departure of major figures soon.