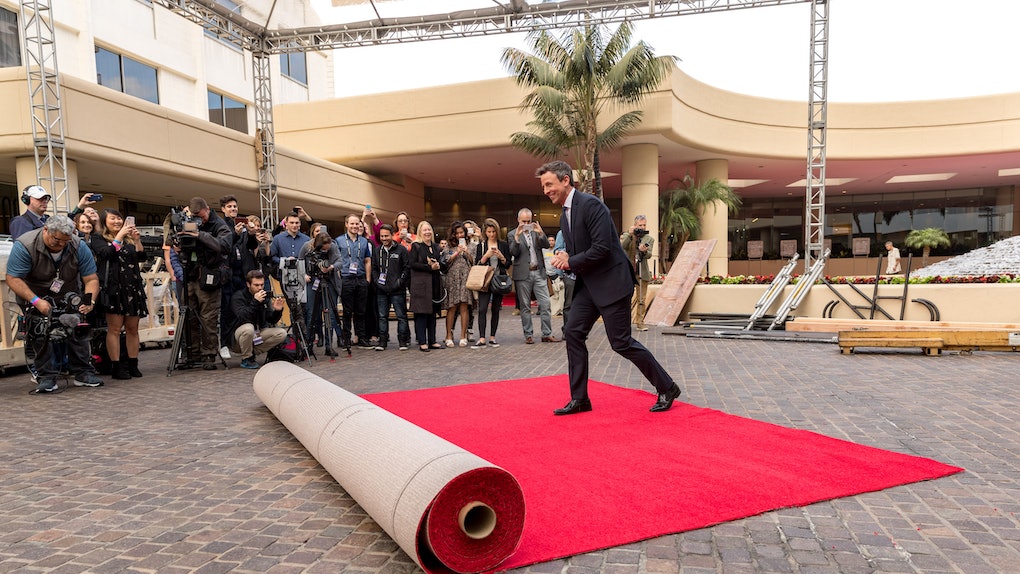 For the super hardcore fans, the Golden Globe awards are an all-day event. The morning sees the stragglers fly into LA for that evening's big party. The later morning and early afternoon are full of the Instagrams of the big stars, documenting their processes of getting ready. Then at 6 p.m. ET, there's the Red Carpet, which for some is more important than the 8 p.m. showtime. But wait, there's more! After the awards are over, there's the aftershows! Let's talk how to stream the Golden Globes aftershows, for those who really don't have any interest in going to bed or getting to work on time come Monday morning.

For some channels, the Golden Globe coverage is going to dominate all week, so having an after show is just part of the process. That's why E! already has one on the calendar. Starting at 11 p.m., (or after the awards have ended, whichever comes first) and NBC's exclusive rights to all coverage ends, the entertainment channel will kick in with a full hour of the E! Afterparty, dissecting all the big moments from the broadcast, and of course, the all important opinions on what people wore.

As always, E!'s coverage isn't limited to broadcast television. Like all their shows, it can be streamed via their website, though you will need a cable log in to watch.

But this year, its not just E! who is getting into the after party game. With only 72 hours to go until broadcast, the Hollywood Foreign Press and The Hollywood Reporter announced a deal that they would also be hosting an official After Party Show, streaming via Twitter.

This, of course, is the companion piece to the announcement a couple of days before that the Hollywood Foreign Press were teaming up with Facebook Live, and with Facebook's Instagram, to host their own red carpet preshow coverage. In 2017, that preshow coverage was streamed live via Twitter, and some fans wondered if the switch was a sign that the Hollywood Foreign Press Association wasn't happy with Twitter, either the reach they got, or perhaps for political reasons.

It turns out that no, Twitter is still very much in the exclusive rights to streaming game, it's just this year, they'll have the after show, not the preshow.

From The Hollywood Reporter's announcement:

Immediately following the Golden Globe Awards telecast on NBC, THR will produce an hourlong live stream featuring one-on-one interviews with the night’s winners, show highlights and expert analysis from THR’s awards-season experts. This program will live stream on Twitter from the Beverly Hilton in Beverly Hills on Sunday from 11 p.m.-midnight ET (8-9 p.m. PT).

THR associate editor Ashley Lee and veteran red carpet reporter Marc Malkin will anchor the live stream, produced in partnership with the HFPA. The live stream will be available on Twitter and connected devices. Viewers in the United States will be able to access the live stream at live.twitter.com/GoldenGlobesLive or via @THR.

The Hollywood Reporter's editorial director Matthew Belloni was very pleased to have this get as part of their Golden Globes coverage:

We’re thrilled to bring THR’s unique expertise on Hollywood's awards season to the Golden Globe Awards after show. Millions of fans will get an immediate backstage pass to continue the Globes experience online as they are talking about the show.

Also putting out a statement on the new streaming show, HFPA president Meher Tatna seemed please that they were going to be broadcasting via all major social media venues.

As we continue to look for ways to connect directly with our audience, we couldn’t be prouder to partner with The Hollywood Reporter for the 75th annual Golden Globes postshow. This postshow will let viewers participate in the excitement surrounding the Golden Globes right after the winners are announced.

More like this
Why Won't NBC Air The Golden Globes In 2022? Let's Break Down The Drama
By Ani Bundel
TikTok's #NotTheMainCharacter Trend Shows The Supporting Role You Connect With Most
By Marisa Casciano
Ellen Pompeo's Response To Jesse Williams Leaving 'Grey's Anatomy' Is Emotional
By Cianna Garrison
Stay up to date