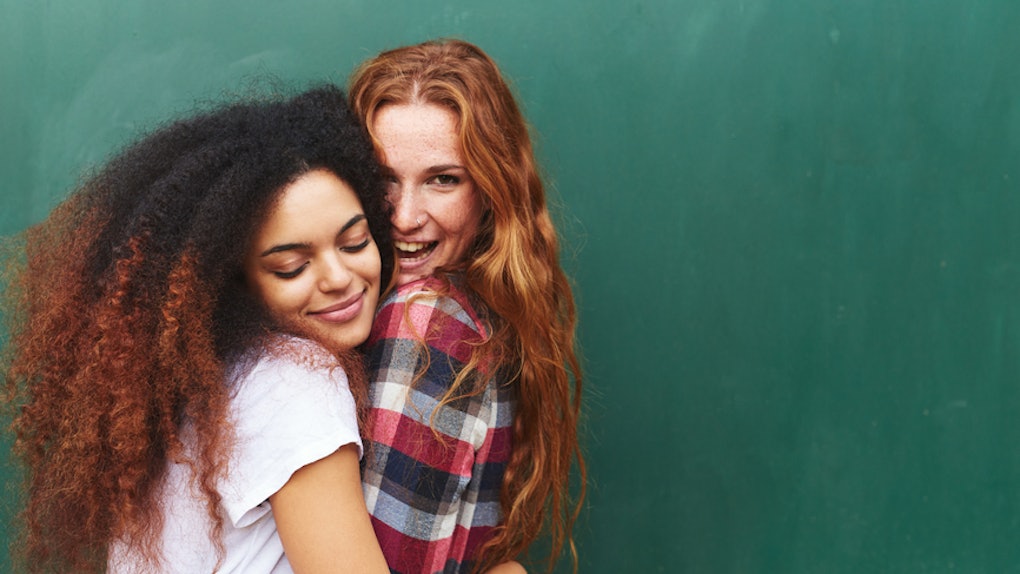 How To Give Your Friends Relationship Advice, According To An Advice Columnist

Stop me if this sounds familiar: It's Taco Tuesday, and you're halfway through your first round of margaritas with your best friend. Between sips and bites, she confides in you that she and her boyfriend of two years might be heading toward a breakup. She wants to know — what should she do? Except, uh, you have no idea, because it's hard to give your friends relationship advice. Especially if you've never dated someone so seriously, or been in her exact shoes.

After all, the stakes feel impossibly high; you don't want to mislead your friend during one of the biggest crises of her life. And you might have had an easier time figuring out those tricky math equations on the SAT than you're having right now, attempting to figure out how to counsel your friend.

Meredith Goldstein, author of the new memoir Can't Help Myself, knows exactly what that's like. In 2008, she was a reporter at the Boston Globe. She pitched her editors an advice column. Why not, right? She had been advising her family and friends her whole life. But before she could write even the first column, she was blindsided by a breakup. To make matters worse, her former boyfriend was a co-worker. Suddenly, she was spending a lot of time crying next to the office vending machines, holing up at her desk to avoid spotting her ex in the cafeteria, and seeking advice from her own friends at The Cheesecake Factory. Anxiety set in. She doubted her ability to write the column.

Luckily for readers of the Globe, she pushed through her fears, and her column "Love Letters" debuted in January 2009 to great success. For nearly a decade, she's helped a fast-growing, opinionated community of readers sort through rejection, confusion, and heartbreak.

Now, she's passing along her skills to you. I asked Goldstein how to give your friends the best advice possible — even when you have no idea what to say or do.

You Don't Need Personal Experience To Give Great Advice

In fact, Goldstein says you might be better off without it. "One danger of giving advice is projecting your own experiences," she says. "Your first instinct is to say, 'I've been there. Let me tell you how it goes.' But you haven't been through that exact situation." Or if you're recalling a painful breakup from years ago, you might gloss over exactly how difficult it was at the time.

So, don't worry about offering your two cents just because you haven't dealt with the exact problem your friend is struggling with. Your opinions might be even more useful if you're approaching a situation with fresh eyes.

Rather than worrying about coming up with one flawless piece of advice, focus your energy on being a good listener. "The friend isn’t looking for a yes or no answer," Goldstein explains. "They’re looking for time and space to process the reasons for their feelings. There’s real power in being a sounding board as opposed to giving a definitive yes or no. No one is going to do exactly what you say. You can’t tell people what to do, you can only help them get there."

Once you commit to listening rather than talking, there will be less pressure on you to spit out something wise. And most importantly, your friend will feel heard.

Watch Out For Your Own Personal Biases And Fears

Goldstein says that she once told a newly engaged friend that she was making a mistake. A decade later, Goldstein says that friend is still happily married — but a lot of her other friends whose relationships she supported and celebrated haven't turned out as well. She theorizes that she might have been too critical of her friend's engagement at the time because she wasn't sure what role she'd still be able to play in her friend's new life. She worried about being left behind.

"You don’t want to bring your agenda to your advice as a friend," she warns. Even if you'd love another single friend to go out with on weekends, that doesn't mean you should encourage your BFF to end her relationship. Before you offer advice, consider where that advice is coming from and why you feel the way you do. If your two cents stem from feelings of insecurity, jealousy, or FOMO, that might not be advice your friend really needs to hear right now.

So, back to Taco Tuesday: Drink your margs, let your friend vent, and don't worry about coming up with one ridiculously perfect, wise, brilliant piece of advice. "No one is going to do exactly what you say," Goldstein says. "You can’t tell people what to do, you can only help them get there."

All you need to do is listen and show your love. As for solving your friend's problem? Hopefully, your support will inspire your friend to brainstorm a genius solution all on her own.